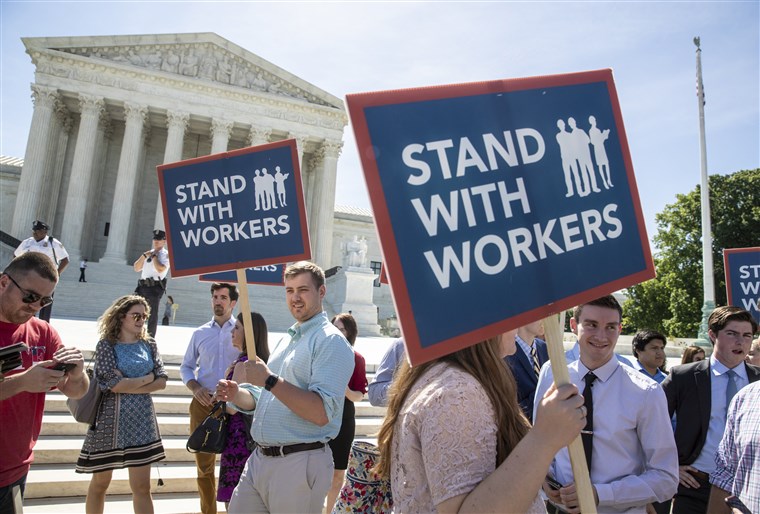 It’s Labor Day today, so I suppose it’s appropriate that Richmond Mayor Levar Stoney has disseminated a fund-raising email calling for recipients to join him in “fighting for working people.” By that, he means giving a “voice” and a “seat at the able” to Virginia teachers, firefighters, and other public-sector workers.

“Virginia public-sector workers will soon have the freedom to form a union and bargain collectively for things such as fair pay, adequate staffing, and safe working conditions,” says Stoney. “Please join me in standing in solidarity with our workers here in the City of Richmond.” While you’re expressing your solidarity, donate here.

Put another way, a vote for Stoney is a vote for the Big Labor/Democratic Party political symbiosis that is strangling the fiscal life out of blue states across the country. Let us refresh ourselves on a few basic facts.

So far in the 2020-21 season, according to the Virginia Public Access Project, Organized Labor has donated to $756,733 to Virginia political campaigns. That’s less than the sums contributed by other economic interest groups such as real estate, law, and health care. But Organized Labor is just getting started. Most of the money this year comes from out-of-state unions. As unions increase their representation of teachers, fire fighters, policemen and other public employees, collecting dues, and regurgitating money back into the political system, campaign donations to Dems will soar.

It goes without saying that public-employee unions give almost exclusively to Democrats. Here is VPAP’s 2020-21 data:

The construction unions are pouring even more money into state elections to support Democrats who will work to rig bidding rules on public construction projects to favor companies with unionized workforces.

Why are public labor unions such fervent supporters of Democrats? Because Democratic-dominated states enact laws that make it easier for public employee unions to organize and that give them more power, such as the right to strike, to negotiate.

Nationally, public unions contribute to Democratic candidates, and Democrats, when elected, repay them from the public purse. The money comes from one of two sources: either higher taxes or from other programs and priorities.

How much will it cost Virginia to shift to public employee unions? There is no way to know for certain, of course, and there are many variables at work. But we can take a stab at an answer.

In this chart I correlated the percentage of unionized employees in the state/local government workforce as provided in a 2018 study by the Economic Policy Institute and the average payout per retiree listed by 24.7 Wall St. based on 2017 Pew Charitable Trust data. (The red dot shows Virginia, where 17.3% of the public workforce is classified as being unionized. I presume this mainly reflects membership in the Virginia Education Association, although I do not know that for certain.)

There is a meaningful correlation between the percentage of public-sector unionization and the average retirement pay of public employees. In other words, the greater the public union share of the public workforce, the more bargaining power unions have, and the higher the wages and benefits they extract.

Let’s say that Democratic Party control of Virginia’s legislature, statewide elected offices, and local government offices creates a dynamic in which Virginia’s public employees manage to increase public union membership and the average payout per retired employee from $22,461, as seen in the chart, by about $5,000, to a level commensurate with other Democratic-dominated states with regimes friendly to public sector unions.

According to 2014 data cited by Governing magazine, Virginia had 189,000 state and local FTE government employees. Added retirement benefits alone would jack up the cost structure of state and local government by almost $1 billion over time. That doesn’t include increases in payroll for active workers.

When Stoney stands in solidarity with Richmond’s public employees, he also stands in solidarity with bigger campaign donations to Democrats. Perhaps someone should ask him where he thinks the money for “fair pay, adequate staffing, and safe working conditions” will come from — Richmond’s taxpayers or priorities such as schools, road repairs, public safety, or other government services.

oes anyone remember when the President of the United States gave a speech or report to the nation and it was covered from beginning to end on radio and/or television? We would anxiously await such an occasion…whether a Democrat or Republican. At least my family did, because we wanted to stay informed as to what was happening. I still do today.

As I meet people, I am often alarmed that they haven’t any idea of what’s going on, and I wonder why. I admit, I watch FOX News Network most of the time, as do most of the people who want to know what’s going on in America and around the world. I have yet to learn when or where they have ever been wrong. They check everything many times and validate it before they report it. I can depend on them. I cannot say that about any other network. It’s my choice.

My wife and I were in Europe and the only station we could get at the time was CNN. I sat there and heard them give a dissertation on something that I had been directly involved with and heard the newscaster spew forth total falsehoods and lies. Later, I mentioned it to life-long friends in Germany, and they said they knew it wasn’t the truth, but that was the only station that they could get from the US.

Our son lives in Barcelona and we are frequent visitors. For a while he could only get CNN, but eventually was able to get CBS. However, they too reported things which we knew not to be true.