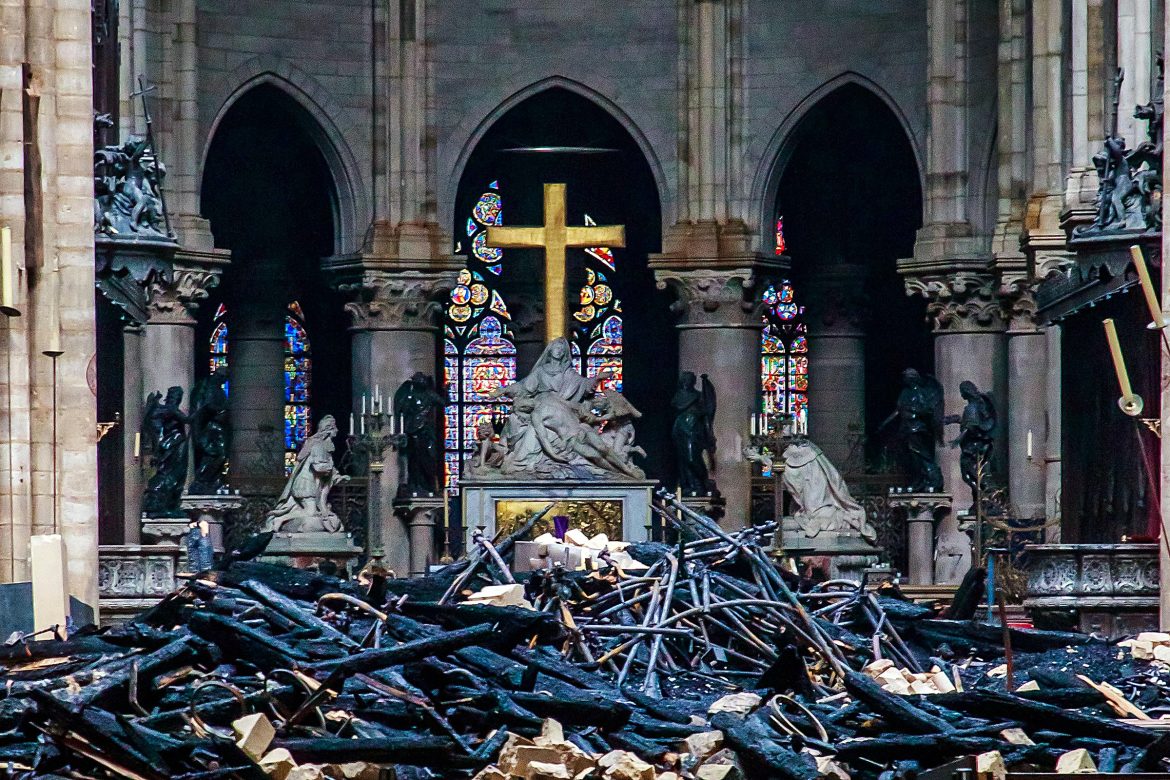 The Cross and the Pieta survive the burning of Notre Dame (photo credit: Christophe Petit Tesson/POOL/EPA-EFE/REX/Shutterstock)

The Destruction of Notre Dame

The speed with which the fire spread was stunning.  The internal wooden structure turned into ashes within a few hours.  The iconic spire crashing into the pyre, a bizarre monument to inept firefighting capabilities.  The heart of France, but possibly more so the heart of Western Christianity, destroyed. Only Saint Peters Basilica in Vatican City is a more renowned reflection of the Christian heritage of Europe.

When I was a teenager, I saw the black and white movie “The Hunchback of Notre Dame”.  In what was one of the finest acting performances of the golden age of films, Charles Laughton played the Hunchback.  The movie and the acting literally saved Notre Dame cathedral from the neglect that would have eventually resulted in its elimination to make way for apartment complexes, a major mall or an amusement park.

Although I am not a Catholic by faith, I understand the importance of preserving the foundation of Christianity in a secular Europe.  Apparently, my concern about the onslaught of totalitarian forces, whether they be globalist or religious, is not shared. Frankly, it is mocked by ignorant people – and their political handlers who are more than willing to feed their historically and culturally disconnected feelings.

I do not know whether the Cathedral fire was accidental or intentional.  There is certainly plenty of confusing things to consider. However, the rush to judgment on the side of “accident” is really astounding.  Without the benefit of a forensic investigation, the French politicians and authorities declared the fire an accident. Further, they immediately blamed the reconstruction company for mismanagement and improper application of safety protocols.   This rush to judgment, rather than alleviating concerns, has fed conspiracy – and rightfully so.

Another interesting aspect of all this is how fast the news of the Cathedral fire disappeared from the mainstream media.  A police officer shoots a fleeing suspect, and the media spends a week dissecting the event with all kinds of experts. With the Cathedral fire, the news media not only bought the accident explanation, but suppressed anyone who suggested otherwise.  Both Neil Cavuto and Shepard Smith of Fox News shut down discussions that suggested terrorism – even though France is experiencing a wave of destructive attacks on churches that have been tied to extreme leftists and violent jihadists.

As an accident investigator, I have participated in complex fire investigations and analyses.  Fire destroys evidence and it is most important to perform the time consuming and painstaking steps similar to those used in diagnosing airplane accidents.  A rush to judgment causes information to be lost and improper conclusions reached – and maybe that is the purpose here. To serve the politics and the politicians rather than to serve the truth.

The French government has stated that the Notre Dame cathedral will be rebuilt, and that money is no object.  The question, however, is into what world will it be rebuilt. Will there be a resurgence in Christianity? Or will the current trends continue and leave whatever structure that emerges adrift in a foreign world.  Will the new Notre Dame cathedral be a place of worship or just a museum of past glories?