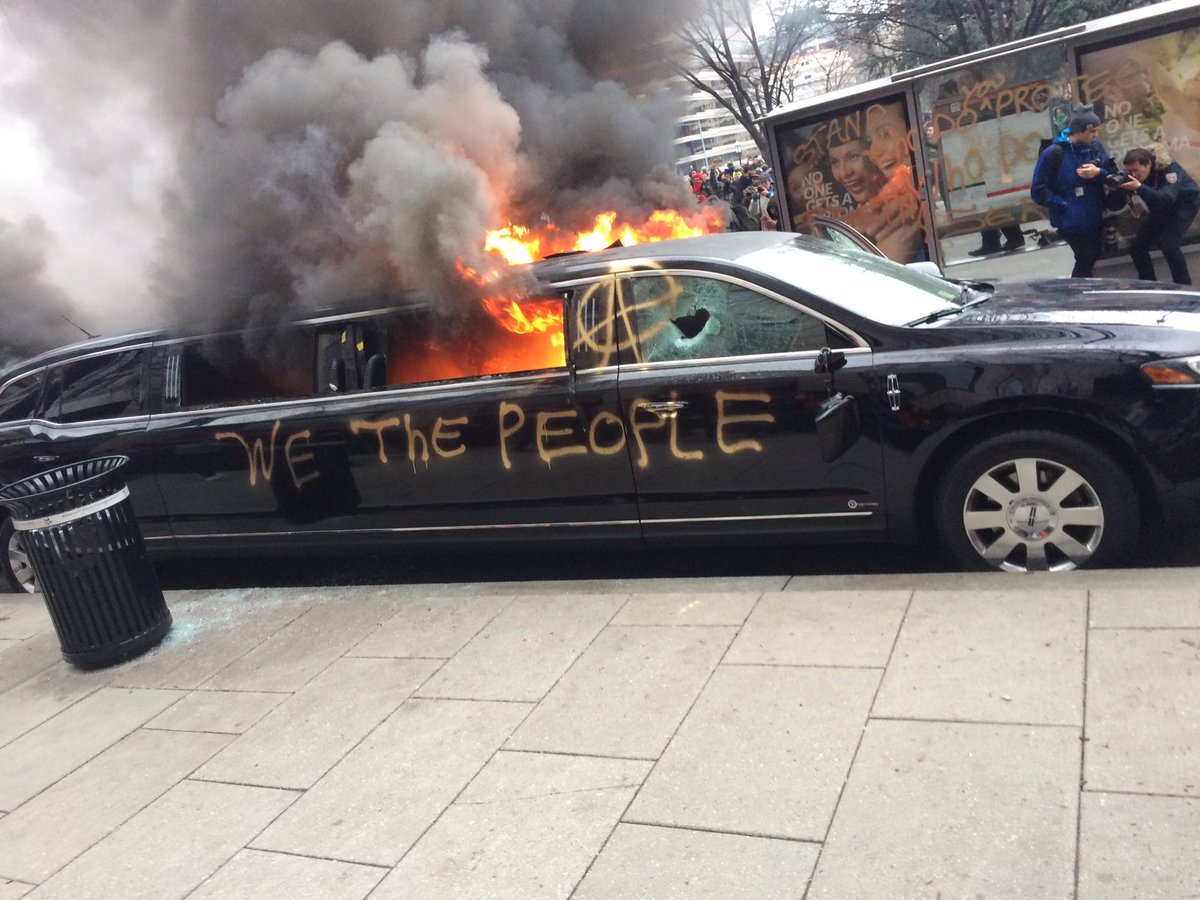 At the Trump inaugural, protesters were in the streets destroying property. The news media covered the destruction hoping for even greater violence. Thankfully, with the exception of a few sucker punch attacks by the anti-Trump protesters, nobody appeared seriously hurt. There is, however, a part of the protest story that seldom gets told. What happens as a result of the property destruction? Here are a couple of examples:

A limousine was first damaged and then set ablaze. Nobody was injured â€“ right? Well, not quite. Many limousines are privately owned. The owner now doesnâ€™t have a vehicle to rent. He is also out the insurance deductible, as well as depreciation and a likely increase in insurance costs. We are talking about thousands of dollars of lost opportunity and livelihood. Who pays, certainly not the protestors!

A Starbuck had its plate glass windows smashed. Nobody was injured â€“ right? Well, not quite. Starbucks employs a lot of folks. At busy times, there are least 8 people behind the counter taking orders, preparing food and drink, and getting paid. Now the place is shut down until repairs can be made – and, once again, insurance deductibles as well as increased costs of insurance apply. We are talking about thousands of dollars of lost wages as well as the lost opportunity associated with closure. Who pays, certainly not the protestors.

The authorities seem to accept property damage as nothing more than an inconvenience to be handled by â€œsomeone elseâ€. They arrest the worst of the protestors, obtain money from fines, and quickly release those arrested if only property is damaged.

The Bill of Rights guarantees the right of the people peaceably to assemble, and to petition the government for a redress of grievances. What we are seeing in far too many streets in far too many cities is a growing â€œrightâ€ to do whatever feels â€œfair and justâ€ with no consideration of the impact on the wellbeing livelihood of other American citizens.

There are some that just protest authority . The symbol painted on window stands for anarchy.
Vandals & dope heads , isn’t pot legal in DC?

Spicer – shut up, don’t order coffee unless you get permission from Conway to speak. If she wants your opinion she’ll give it to you.

Conway – don’t ever put the word “alternative” in front of the word “facts” again.. WTF.

Democrats – way to keep your eye on the prize. Maybe you should stop looking for new ways to get cheap jollies and start figuring out how you’re going to win back any of the 1000 state legislature seats you’ve lost since 2008. Getting excited that a city that voted for Clinton 90.9% to Trump’s 4.1% came out to an anti-inauguration instead of Trump’s inauguration is self-congratulatory horsepoo.

Congress – you better be so engrossed in writing that health care replacement that you don’t even have time for Trump drama.

Republicans – Don’t get cocky, after 8 years of gains, the pendulum is about to start swinging in the other direction.

Trump – keep trolling ? I guess it’s working for you ??

Me – stop wasting time with this post and go get something to eat, you’re hungry.

After reading the comments, it appears that we have been deliberately led astray by the leftist posters. The story is about the damage done to average Americans by leftist thugs. Does anybody doubt this? And, by the way, what penalties did the leftist protestors who were violent actually face. DC has a sliding scale starting with $100 fine and 10 days in jail. Anybody actually in jail? And restitution being paid?

The average America does not live in DC own a business there. The damage was limited to the city so you describing it as damage against the average American is laim. Why do you care so much anyway. This is a law enforcement issue. Leave it to the professionals

The employees in the damaged Starbucks are black, and most are women. I participated in a multiple sclerosis walk and had coffee at that busy place. I guess, to you, they aren’t average working Americans.

And law enforcement doesn’t take care of private losses, and there are thousands if not tens of thousands of dollars of private losses here. Gad, do you know anything about how the private sector works? You are a perfect example of how ignorant the left really is.

actually, if you want to go that way, the only ones paying are the insurance companies and the owners of the buildings, both of which represent the same 1% that controls the entire country. It is the cost of doing business in DC.

Somehow you are linking hoodlums with everyone who is not in love with the GoldenBoy, Trump. Why is that?

Gad – you are a perfect example of how ignorant AND arrogant the radical, religious, right is.

As I said before, you haven’t a clue. Insurance almost never covers 100% of a loss – there is a deductible and if you own a car you have a loss deductible in your policy. That deductible comes straight out of the owners pocket.

Insurance companies also have depreciation schedules – you don’t get a brand new car when you total your 2006 ford.

The employees lose their job and their paychecks temporarily until the business gets back up and running. They are not insured against loss of employment under circumstances of riot or act of God. Many employees will,have psychological scares from being attacked while hiding in their buildings or cars.

Be gone. You are a complete idiot and are probably some kid living in a basement.

The point you are missing now that you cry about the average American being hurt but only those directly impacted are impacted at all. You hyperbole has no place in the conversation anymore. We have had enough of over-the-top talk the last 8 years. There is a new leader and a better way to debate. I am calling you out with your exaggerations and false claims

Reality has no place in pink land.

Insurance is a pool of people. The more the pool of insurance money is depleted the higher the costs rise for everyone in the pool. Obamacare killed the insurance pools because it dumped a bunch of sick people into the pools stupidly thinking that young and healthy people would cushion the rising cost. When the young didn’t sign up, costs to everyone skyrocketed and insurance companies bailed out of unprofitable markets that would have bankrupted them.

Maybe we should be concerned about the lack of honesty and accuracy, not to mention the integrity of the media when they intentionally misreport the information. The numbers may not be a big deal but the intentional inaccuracy is a big deal. And it is not just the numbers but the inflammatory report that the Martin Luther King, Jr. bust was removed from the Oval Office when in fact it is still there and will not be removed. (But Churchill is back.) We will undoubtedly see much more of this and we should demand accountability for accuracy from the Press.

Some many things wrong with your posts. First, you assume that the reported numbers are incorrect without any facts to establish your position. Second, the Whitehouse is spewing out all sorts of excuses instead of simply accepting the criticsm and moving on. Also. No one truly cares. This is all bait to see how crazy Trump is.

Yep, no problem. Just cancel the White House credentials for the press corps and they will begin to fall in line. The media wants a war, perhaps they can get one.

One thing that does puzzle me though. There is one ‘no one attended’ inauguration photo being passed around the internet in reports of a mall almost completely empty. Funny thing is that during the grande ball the night before, live video appeared to show more people there than that photo did of the inauguration itself. So did all those people just show up for the cheesy music and didn’t bother to go to the real deal? Maybe because it is January, they hadn’t earned any ‘paid time off’ to leave work even if they were ‘dying’ to see Trump? Or perhaps they heard about the thousands of protest buses and figured it was better to be safe than sorry? Who the hell knows? But you are right on one thing, most of us really don’t give a sh!t.

Homer Simpson, is that you? Duh-oh!

Explain, please. Coffee has not kicked in and I don’t get your joke

Megalomaniacs are like that. He will certainly go down in history as the most thin-skinned president … ever. Problem now is that he has more than a twitter account with which to “punish” his detractors. He has the massive power of the federal government. I fully understand why people are concerned.

You say megalomaniac? He used “I” three times in his address. Your hero, obama, can’t get a sentence out without “I, me, my”. He even awarded himself, thru’ his SecDef, a medal! Megolomaniacal is his legacy!

Bad assumption John. I donated to, worked for, and voted for Trump, but who I voted for has nothing to do with a description of Trump’s characteristics. You can keep on thinking that the Emperor is outfitted in fine raiment that only the sycophants can see, but that doesn’t make it so. Yes, Obama is a narcissist.

He was always the smartest man in the room according to his own statements – except he was often childish and disorganized.

Unfortunately, Trump has to make the very important point that press integrity is important to a free and informed society. I attended the first Tea Party rally in DC. The press refused to cover it or even demeaned it – yet crowd photographic analysis had it over a million and as much as a million and a half.

Trump also had to defend himself against the not so subtle claim of racism associated with the non-removal of the MLK bust. This was fake news and yellow journalism at its very worst.

Agree media is biased, but that fact needs to be exposed in a way that does not make it appear that the larger problem is Trump’s narcissism.