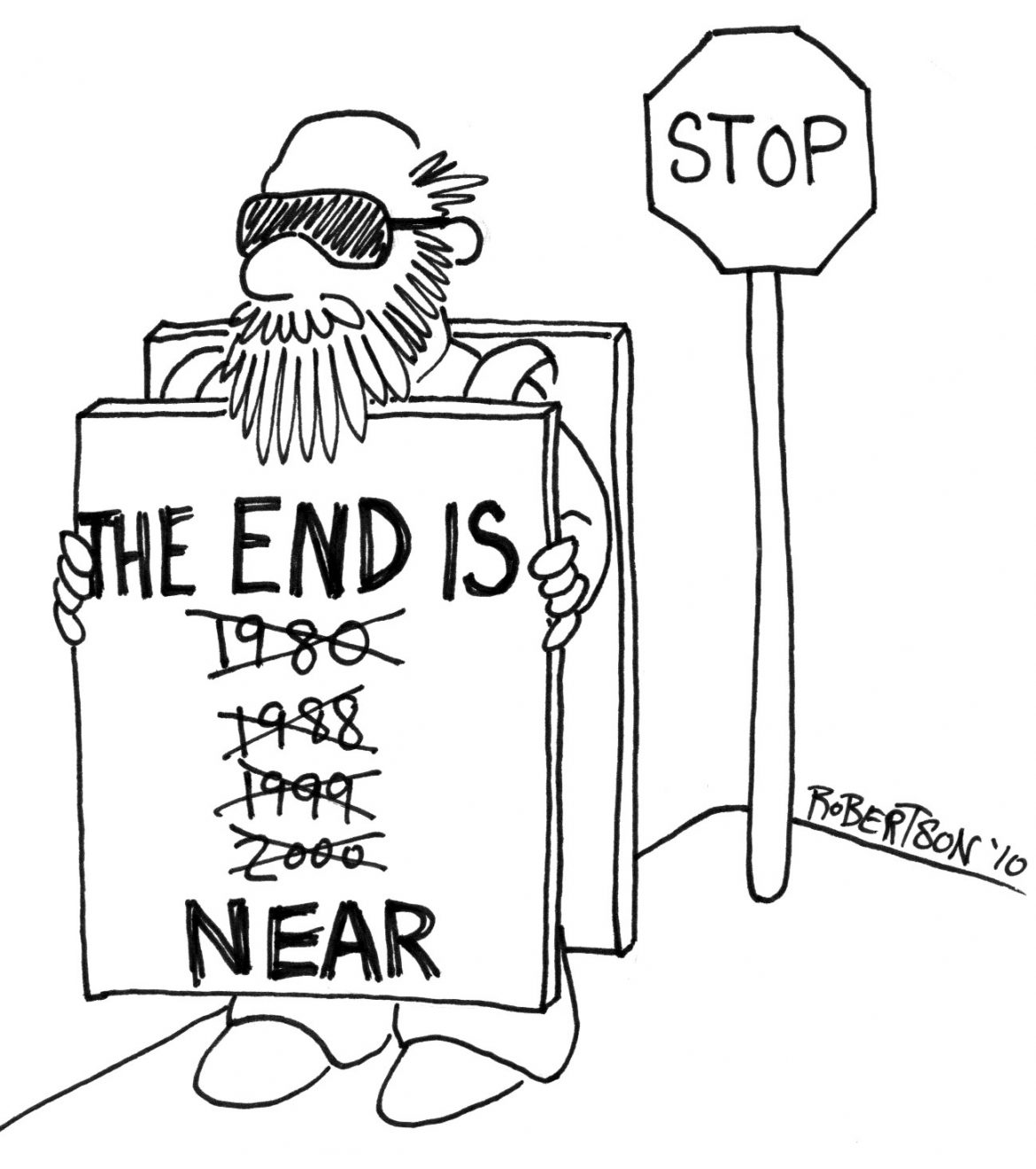 The End is Near

“It looks like climate-change has returned,” said my buddy Al, as I entered his coffee shop last week. He had the papers spread out in front of him on the counter.

“Yes, it’s back,” I replied. “Alexandria Ocasio-Cortez is running around warning us that we have only 12 years left before cars, planes, and farting cows destroy the earth. The ice caps are going to melt and New York will be under water. Actually, I’m not sure that would be bad.”

Before the winsome Miss “Occasional-Cortez” came along to revive it, climate-change had faded off the front page for several reasons. One of those reasons was scientific. Actual climate scientists – e.g., Dr. Fred Singer, Professor Emeritus of environmental science at UVA, and Canadian Dr. Timothy Ball, Chair of the Scientific Advisory Committee of the Natural Resources Stewardship Project – were debunking Al Gore’s global warming scare-campaign by showing that the climate has undergone repeated changes during recorded history. Most of those changes occurred before cars, planes, and heavy industry came along. This was bad news for global catastrophe prophets (including Dr. Gore) who were making a nice living warning us that we’re doomed unless we hand over all of our money, move into grass huts and pedal rickshaws to the store. Miss O-C doesn’t seem aware of any scientific data, so she has jumped in with both feet.

A second reason why global warming/climate-change went off the radar screen was that environmentalists had successfully grabbed the money by scaring politicians into funneling billions into programs to “do something” about climate change. Clearly this was the climate-activists’ true objective. As I have noted in other articles, politicians dream of finding a “problem” that can never be solved, no matter how much money is thrown at it.1 Climate-change is such a problem. It has been happening for millions of years for reasons that remain elusive.

Despite these logical flaws in the carbon-did-it case, billions are being poured into research grants to prevent climate-change. (Your government at work.) These expenditures won’t stop climate change, but they will enlarge the legions of spear-carriers who support the scare. Writing from Brisbane, Australia, Dr. John Ray says:  “The Holy Grail for most scientists is not truth but research grants. The global warming scare has produced a huge downpour of money for research. Any mystery why so many scientists claim some belief in global warming?”

During my career in the technical government-contract industry, back-bench cynics (including yours truly) called our trade “prostituted science” because of the omnipresent pressure to produce findings the customer wanted. Valuable contracts could be lost, should a contractor get diverted into an esoteric pursuit of “truth” and away from the customer’s wishes. It was always important to know which way the wind was blowing. I don’t claim that research was always corrupted in this way, but sometimes it was. Government-funded research is not “pure research.”

Thirdly, there is the “disaster fatigue” factor. Around the time of Al Gore’s Earth Day concerts, several years ago, the global warming movement seemed to reach such a crescendo of hysteria that perhaps its champions thought it prudent to lie low for a spell. Under the steady drumbeat of “doom-doom-doom,” the public tends to develop scare-numbness – particularly when the disaster is posited a hundred years out. You don’t have to be a Harvard Ph-doctor to see that climate gurus who can’t predict the weather three days from now might have a problem or two predicting it correctly 36,524 days from now. If you have a stake in getting the public to buy a far-away disaster, you don’t want anyone doing too much analytical thinking about these issues. Maybe the scare campaign worked, so let’s tone it down for a while.

Democrats’ retooled campaign to rid the world of carbon emissions and cow-flatulence – “before it’s too late” – is drawing lots of attention: some scientific, some financial, some political, and some entertainment. The latter primarily because talking heads like having an articulate, nice-looking young woman like Rep. Ocasio-Cortez on their TV news-shows. But despite her entertainment value, actual science and contrary public-opinion are throwing cold water on the hysteria. Here are some notes from all over on what’s happening:

Scientific Consensus. The late Dr. Nigel Calder – former editor of The New Scientist and author of innumerable books and articles on science, including The Chilling Stars – was asked if scientific consensus on climate change is now so entrenched that it can’t be shifted. He replied:

“The idea of a settled consensus is alien to productive science. In any branch of research that isn’t moribund, battles rage between the entrenched bigwigs and their cronies, versus others who challenge their hypotheses. What makes science so valuable …is that eventually errors are corrected and ideas shift. But that can be a slow and painful process taking 10-20 years.”

Climate Driver. Dr David Whitehouse – an astronomer, former BBC science correspondent, and author of The Sun: A Biography – made these comments:

“…Annual global temperatures … [indicate] that …recent successive annual global temperatures are well within each year’s measurement errors.  Statistically the world’s temperature is flat. The world certainly warmed between 1975 and 1998, but …no scientist could honestly look at global temperatures over the past two decades and see a rising curve. It is undisputed that the sun … [late in] the 20th century was behaving differently from that of the beginning. Its sunspot cycle is stronger and shorter and, technically speaking, its magnetic field leakage is weaker and its cosmic ray shielding effect stronger.  …When the sun’s activity was rising, the world warmed.  When it peaked in activity in the late 1980s, within a few years global warming stalled… The sun is by far the single most powerful driving force on our climate, and the fact is we do not understand how it affects us as much as some think we do. So look on the BBC and Al Gore with skepticism.  A scientist’s first allegiance should not be to computer models or political spin but to the data: that shows the science is not settled.”

Climate Change and Fuels. Trilby Lundberg is publisher of the Lundberg Survey, a national survey of gas prices quoted regularly by major news organizations. These are excerpts from a CNN interview of Mr. Lundberg:

CNN: What are the effects of alternative fuels?

TL: “[Government] subsidization of alternative fuels – non-petroleum fuels – has already added a great deal of cost for gasoline consumers here in the U.S. To further mandate these uneconomic sources that cannot compete – even with heavy subsidy – would make gasoline prices higher and hurt consumers. When the market is ready – if it ever is – for such fuels, then they will not need subsidies. Meanwhile, the much heavier use of ethanol in the United States is affecting world prices – not only U.S. gasoline prices, but world prices for those consumables that use corn.”

CNN: So you see these as hurting Americans more than helping them?

TL: “Yes. The use of tax money to prop up these uneconomic sources of fuel is itself a negative for consumers… The use of ethanol …makes gasoline prices higher than they otherwise would be, through the difficulty of achieving EPA regulations and the final gasoline product…”

CNN: As far as conservation, what trends are you seeing?

TL: “I’m hoping that consumers will see through the rhetoric about consuming less, demanding less, as faulty. It is not a given that consuming less [is] good for our economy or for our personal freedom. It is not even established for our environment that we [should] deprive ourselves of gasoline for our personal mobility as well our commerce. … [To] deprive ourselves of this great product that makes the country go around, commercially and individually, I think is flawed.” …I don’t accept … that [global warming or climate-change] are caused by petroleum consumption, nor do I accept that the human species should not affect its environment. So even if it were someday … shown to have some small effect on the environment, I see no crime. In fact, taking into account the many, many millions of people around the world that envy our way of life, it would seem more humanitarian to wish them the kind of plentiful petroleum products and vehicles …that we enjoy …to lift themselves out of [a] backward, poor way of life.”

Shouts from the Outback. Here are a few responses to Martin Durkin’s BBC film, The Great Global Warming Swindle2, after it was aired by the Australian Broadcasting Company:

Roman Counsel. Finally, this snippet from Dr. Fred Singer’s weekly info-mail, from which several excerpts for this article were drawn:

“The intellectual Roman Emperor Marcus Aurelius (AD 121-180) must have foreseen Global Warmism. He said: ‘The object in life is not to be on the side of the majority, but to escape finding oneself in the ranks of the insane.’”

Maybe it’s not hopeless yet. Thank God for the Internet. It is now the people’s most powerful tool for defeating crazy ideas.

“Whenever you find yourself on the side of the majority, it’s time to pause and reflect.” (Mark Twain).

The End is Near was last modified: June 12th, 2019 by Woody Zimmerman