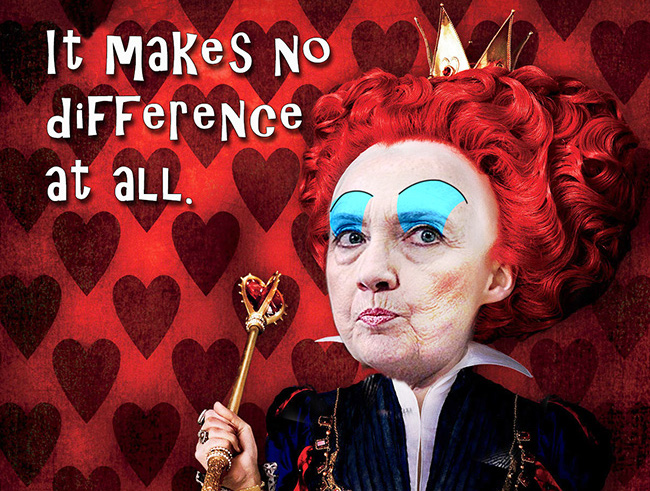 The End of Hillary (and Bill)

Hillary Clinton, the wannabe Her Royal Highness Queen Hillary the First, claims the Justice Department investigation of her illegal server is “just a security review.” If HRH Hillary I is elected President of the United States, the Queen of Hearts will seem sane. And tame in comparison.

It matters what people have done in the past, not what they say. It matters what decisions someone has actually made – like setting up an illegal server at home – not just what they believe. It matters that the rule of law apply to everyone – including the royal Clintons.

Richard Nixon is envious of the imperial presidency of the Clintons.

My oldest boys are in the U.S. Army and both had security briefings. They told me the severity of “just the appearance” of a violation. Many of my government contractor friends with high level clearances say that just setting up a server outside of the State Department is a violation of the law – even if not a single classified document was sent to it. Just having it up and running, with the ability to receive and send classified documents, is against the law and a potential act of espionage.

Bob McDonnell and Phil Hamilton wish they had Clintons’ immunity from Federal prosecution.

Martha Stewart and Leona Helmsley, the Queen of Nice and Mean, respectively, know where this is heading – for anyone other than the Clintons.

The United States of America can only exist under a rule of law. If this immunity deal leads to applying the law to HRH, it is a great thing for us, for the rule of law and the security of our nation.

If the rule of law applies, sooner or later to Al Capone, it should fit for the Clintons.

We need to restore every citizen’s trust that the laws apply to every American.  The Clintons willfully violate the citizens’ trust, and it’s time to make them accountable. Equal justice for all.  What a concept.

Jane Fonda might want to know what the statute of limitations is for treason.

And for obvious reasons, Juanita Broaddrick, Kathleen Willey, Paula Jones and others might want also to check.

The End of Hillary (and Bill) was last modified: March 11th, 2016 by Guest Contributor Shak Hill

Articles like this prove that Shak Hill just can’t be taken seriously.

The laws do apply to every citizen, but they require enforcement. Those responsible for enforcement who do not do their duty must be removed from office.

Ha… what does this matter? The country is so overwhelmingly Democrat, Socialist Democrat thanks to immigration, that whatever the Clintons do, doesn’t matter.

The GOP is finished.

The best predictor of future behavior is past behavior. We know how the Clintons have behaved in the past and how they will behave in the future.

Two books, “Clinton, Inc.” and “The Clintons’ War on Women”, should be read by anyone considering voting for Hillary or considering staying home on election day. If two books take too much time to read, choose the latter.