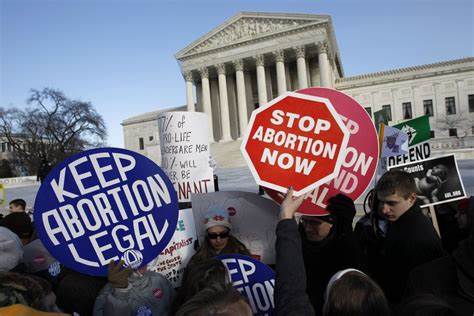 Demonstrations at the Supreme Court

Last week the justices of the U. S. Supreme Court (a.k.a. “SCOTUS”) threw a can of gasoline on the political bonfires of the country when they reversed, by a 5-4 vote, the 1973 Roe v. Wade decision which had declared abortion (on demand) to be an untouchable right across the entire nation. This reversal means that abortion is no longer viewable as a Constitutional right, but as a matter of state-concern like other human-behavior issues, such as child-care, abuse, injury, robbery, murder, etc.

Every state may now handle abortion as its voters wish, via the construct of representative government. State courts may judge the validity of their state’s abortion laws against the measuring-stick their state Constitution, but not with reference to any previous stipulations of Roe v. Wade, which are now moot.

Mobs of hysterical demonstrators – some approaching riot-level have been raging about SCOTUS making abortion “illegal.” But they are misguided (at best) or unhinged (at worst), for the reversal of Roe does no such thing. It simply restores the status quo ante – sending the legal matter of abortion back to the states, where it was before the 1973 ruling.

People in the business of performing abortions will probably suffer some disruption in states where laws banning abortion were “triggered” by the cancellation of Roe. Those laws have now taken effect. But in states which already have laws allowing abortion on their books, things will continue as they have been. Elsewhere, pro- and anti-abortion forces will be gearing up for the Mother of all political battles (no pun intended) over how their states will regulate, allow, or prohibit abortion.

All this is entirely understandable. A court ruling which strikes down what millions of citizens, judges, governors and legislators thought was “settled law” is bound to throw the political orbits out of alignment. It’s what can be expected when a ruling that never should have been issued is finally ditched.

Some politicians and commentators are saying that even if Roe v. Wade should not have been issued, it’s “too late” to undo it because of the disruption produced by its cancellation. But none of this should prevent correction at the earliest moment. After 49 years, that moment has finally come.

What I want to discuss here, however, is the matter of “protection.” Some readers might imagine that I’m referring to the protection of women, or perhaps the legal protection of businesses that provide abortion. But I’m not addressing those aspects. Instead, I want to examine the end of political protection that the reversal of Roe has produced.

Many political office-holders at both the federal and state levels are almost as upset as the crazies who are shouting out in the streets. Some pols are pro-abortion, and some are anti-abortion, but both factions seem “mad as hell” about the Court’s decision. Why is that?

What many – possibly most – voters don’t realize is that the 1973 ruling removed a heavy political weight from the shoulders of state and federal legislators. With abortion declared as an untouchable “right,” there was no longer any need to grapple with that thorny moral issue in either state legislatures or the Congress. Legislators could hide behind Roe v. Wade and declare that the matter was out of their hands.

A legislator who actually favored abortion could make sympathetic noises to anti-abortion voters, while declaring that his hands were tied by Roe. Conversely, an anti-abortion legislator could find shelter from ugly legislative fights by pleading that he had no real say in the matter. It had all been decided far above his level and was now “settled law.” So everybody was happy – possibly excepting 63 million babies who never got to grow up into useful and productive Americans, and an unknown number of mothers and fathers who live with the permanent grief of having destroyed a precious, irreplaceable child.

But now – finally – the “protection racket” created by the 1973 Supremes is kaput. We’re going to have a deuce of a fight over this fundamental human-life issue that politicians and judges have been able to avoid for the past half-century. Even in states where access to abortion seems firmly fixed in law, the “Antis” will wage political war by showing voters that the Nazi-esque practice of tearing a child to pieces in a mother’s womb is disgusting, immoral and completely out of place in a civilized society that was founded on Christian principles. There is no possible rationale that can justify such barbarity, and I don’t care how many loudmouthed women march past yelling “my body, my choice!” No one has the moral authority to destroy the life of another human being.

Americans of the Normal Culture – who want only to live orderly lives, do useful work, and raise decent, loving families – are heartily sick of the destruction and division that have bedeviled us since 2016. By a campaign of lies and deception, Democrats persuaded many voters that Donald Trump was causing that furor, and they promised that Joe Biden would restore peace and “normalcy” to our troubled land. Good Old Joe – hiding out in his basement – was gonna “bring us together.”

Of course, he has done nothing of the kind. And now, with no end of commotion, crime and economic trouble anywhere in sight, this new uproar over abortion has arisen. Many troubled citizens are asking, “How can we establish peace? Who can restore normalcy? What do we need to do?”

My answer to these questions is that abortion’s wretched Culture of Death has no place in this blessed land. And now, in the Lord’s Providence, a scenario has arisen which demands that we finally deal with it, head-on.

Can things be put right? Can righteousness prevail, and do we want it to? Can good people work together to make America what it was always supposed to be?

I believe we can and we shall. We are imperfect people, but we know the truth. We have the power of good on our side. And we are in the Lord’s hands.

The End of Protection was last modified: July 1st, 2022 by Woody Zimmerman

If some people don’t like their states banning abortion, they should move to another state! That’s what the Left always tells Conservatives: you don’t like it, tough, move. So, now it’s their turn. Just don’t move to my state, go to California, Illinois, or New York.

“hat’s what the Left always tells Conservatives: you don’t like it, tough, move. ” I have never seen a Democrat post that. Seen it a zillion times from Republicans, though

I’ve said for years that abortion is murder. The state determines who gets executed. If states want to execute innocent children alongside of convicted murderers, than that is their legal prerogative. For now….

“For now” because Battle #1 has been won in the courts. But, for Battle #2, if the federal government has the power to enforce civil rights, then the federal government has the power to step in and enforce the most basic civil right to life unless you have been duly convicted of a capital crime. That is the battle for the future. Today, we savor victory #1.