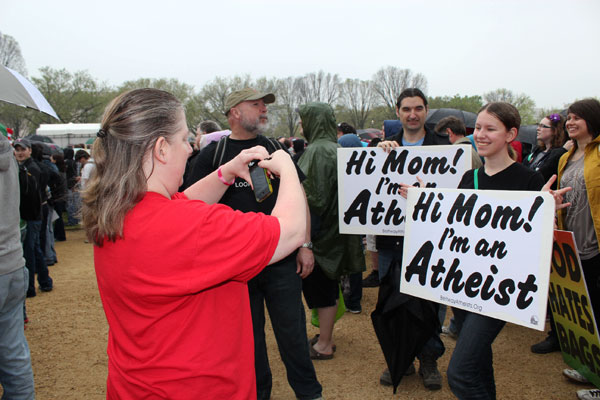 My Russian teacher at Wheaton College, Miss Naumoff, liked to relate an anecdote from the 1950s, when Nikita Khrushchev was the Soviet Union’s head guy. Khrushchev was being interviewed by western reporters who insisted on repeatedly asking him if he believed in God. Finally becoming impatient, Comrade Nikita exclaimed, I’m an atheist! I’m an atheist! God knows I’m an atheist!”

That apocryphal story, contrasted with the recent celebration of the long life and ministry of Evangelist Billy Graham, reminded me of a story Pastor George Hancock-Stefan told about an atheism seminar held in the Soviet Union during the 1980s – seven decades into communism’s flagship effort to make Marx and Lenin’s vision of dialectical materialism a working reality. Marx had famously called religion “the opiate of the masses.” Long a primary state doctrine, atheism had been thoroughly hammered into the minds of the Soviet people. God had been effectively erased from the USSR – or so the pooh-bahs of western faculty lounges thought.

On the aforementioned occasion, some 10,000 people had listened to hours of lecture on the joys and benefits of atheism. Finally, the lecturer called for questions or comments. A nondescript old man shuffled forward to the podium and asked to speak. Seizing the microphone, he proclaimed in a strong voice: “Christos voskres! (Christ is risen!)”1

After a moment of silence, 10,000 people rose and roared back the ancient Russian response: “Voistynu voskres!  (He is risen, indeed!)”

Thus (recalling Pastor George’s words), did sixty-plus years of one of history’s most committed attempts to eradicate God from a people’s collective mind and spirit come to naught. All the labors of atheism vanished like a puff of smoke on a windy day. God still dwelled in the hearts of the Russian people, and all the ruthless power of the Marxist-Leninist Soviet state had failed to dislodge Him. It was a day to recall the words of Isaiah:

“…the mountains and the hills shall break forth before you into singing, and all the trees of the field shall clap their hands.2

That story draws me strongly. My mind and spirit resonate with it, and I am filled with emotion. I thought of it again, this week, with Easter falling on April 1st in the Catholic Church and most Protestant denominations.3

As it happens, the USA has also been subjected to a determined blitzkrieg, over the past sixty-odd years, to scrub God from the nation’s public discourse. Originally instigated by liberal intellectuals, agnostics, atheists, educators, publishers, and much of the entertainment media, the militant secularism campaign has now been effectively joined by the judicial arm of both state and federal governments.

Various court rulings since the 1940s have eroded First Amendment protections of religion. Bible-reading and non-sectarian prayer in schools – a daily staple in the 1940s and ’50s, when I was a student – have been declared “unconstitutional.” Witnesses no longer place a hand on the Bible and swear to tell the truth in court. Wearing of religious symbols is banned in some schools, and students have been academically penalized for writing reports on Christian topics.

This focused campaign, reinforced by growing governmental hostility to Christian expressions, has brought public education to the point where God and the Christian Faith cannot be treated as serious subjects of study. Today, nearly every other religion – including radical Islam – has currency and can be discussed freely in schools. But the names of God and the Christian Savior, Jesus Christ, may not be uttered in schools or in the halls of government, except as profanity.

In recent decades, the Hollywood film industry has mostly ignored religious themes – or else has parodied faith and Biblical subjects with sacrilegious slanders, such as Scorsesi’s Last Temptation of Christ. The television series Touched by an Angel, produced by Martha Williamson, has treated God and faith with respect and reverence. But even in that context, mentioning the person or name of Jesus Christ is verboten – so strong is anti-Christian bias in the entertainment industry.

So the stage was set. Just when it looked like anti-God forces were triumphantly sweeping the field, another little old man tottered up to the podium and proclaimed, “Christos voskres!” That “little old man” was the manly, controversial, supremely confident action-films actor (and now big-time director), Mel Gibson. His declaration of Christos voskres! was his wildly successful 2004 film, The Passion of the Christ, into which he poured $25 million of his own money.

Like the communist apparatchiks at the Soviet atheism seminar, Hollywood and New York film moguls are shocked and outraged that Mr. Gibson has resurrected, cinematically, a subject they thought was safely buried for good. The Passion was unquestionably an “in your face” display of cinematic chutzpah. But it was more than that. In one TV-interview, Mr. Gibson mentioned that in the crucifixion scene he expressly wanted his hands to be shown driving the nails into the Savior’s hands and feet, thereby illustrating that his sin had also caused the death of God’s Son. How many public figures would consider saying such a thing? 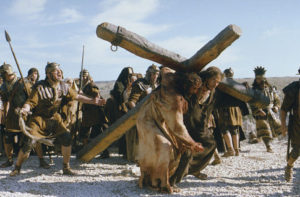 Scene from The Passion of the Christ

In the Protestant circles that I frequent, Mr. Gibson’s tour de force received much attention – almost to the point of religious devotion. People spoke of the film causing of a “religious re-awakening” in the USA and perhaps the entire world. They were excited that something had finally turned things around, religion-wise, in our country.

I think a little differently about these matters. Although I have great respect for Mr. Gibson’s social and financial courage – as well as his personal faith – in daring to make a religious film which his industry opposed, I don’t think the graphic, hard-hitting film truly created a return to faith. God was already in the hearts of people, and that affirmation was waiting to burst out when someone finally stood up and proclaimed “Christos voskres!” Mr. Gibson’s film simply emboldened the great shout of “Voistynu voskres!” which has rung out, world-wide.

God and Jesus Christ, it turns out, were not dead after all. Nor was militant secularism triumphant. Just as God still lived in the hearts of the Russian people after all those years of soul-deadening propaganda, so He still lives in the hearts of Americans – indeed, in the hearts of people the world over. We needed only to hear “Christ is risen!” – brashly proclaimed through a film produced by a man no one would call a “religious leader” – to be inspired to roar back: “He is risen indeed!” God does truly “use the foolish things of this world to confound the wise.”4

Yes, Christ is risen. He has defeated death. He is alive, and He lives in the hearts of far more people than we might have thought. They, living in the power of Christ’s resurrection, will defeat the “culture of death” we live in. That is why I titled this piece, “The Enduring Hope of Easter.” As the Psalmist said:

Shout for joy to the LORD, all the earth, burst into jubilant song with music; make music to the LORD with the harp… and the sound of singing, with trumpets and the blast of the ram’s horn – shout for joy before the LORD, the King!

Let the sea resound, and everything in it, the world, and all who live in it. Let the rivers clap their hands, let the mountains sing together for joy; let them sing before the LORD, for he comes to judge the earth. He will judge the world in righteousness and the peoples with equity.5 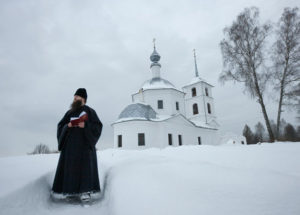 The Enduring Hope of Easter was last modified: March 31st, 2018 by Woody Zimmerman

He is risen indeed!

Woody, you have written yet another eloquent, powerful, compelling article. Thank you for your contributions. Indeed, the Hope of Easter Endures. May you enjoy an especially Blessed day tomorrow.