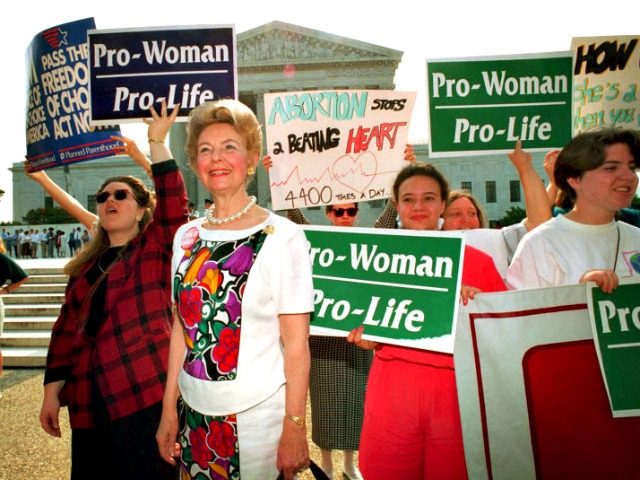 The ERA of Phyllis Schlafly

Phyllis Schlafly, dead at 92, will be eulogized extensively by those who knew this formidable, brilliant and complex woman personally.

For others of us, she influenced our lives and our politics from afar, but no less importantly.

Mrs. Schlafly was a lioness on the political right; brilliant, focused and a dynamic champion for faith, family and human liberty.

Her effectiveness as a defender of traditional family values is best witnessed by the unending hate and vitriol poured out on her personally, even now in her death.

The matriarch of the radical left feminist movement, Betty Friedan, famously told her in a 1973 debate, I’d like to burn you at the stake.â€ Such was the impact of this extraordinary woman.

To say that Mrs. Schlafly started a brush fire of grassroots activism that exerted enormous â€“ pivotal â€“Â  and continuing influence on American politics is probably too little credit.

I first became a fan of hers after becoming involved in West Texas politics for Ronald Reagan in 1976, when I read A Choice Not an Echo (one of twenty books), and then her dazzling writing on the Equal Rights Amendment, which she virtually single-handedly killed when it was only three states away from being ratified into the U.S. Constitution.

She formed for this young conservative at the time, and millions of others like me, bedrock outlooks and approaches to the issues of our day. As a candidate running for the U.S. Congress in 1978, I was both anti-ERA and anti-abortion, and it was Mrs. Schlaflyâ€™s masterful analysis of those two key issues that I turned to time and again. [It was also where I learned firsthand about the viciousness of the hard left and their intolerance of ideas, which Mrs. Schlafly withstood daily for 60 years.]

But, and perhaps most importantly, she gave us an insight into the failure of politics â€“ and our republican system – when the people themselves are not directly involved in informing and shaping the issues that directly affect their life, liberty and property.

She thought it is too important to be left to politicians.

If Mrs. Schlaflyâ€™s political reach in her life was as wide as the world in which she lived, it is her faith in God and her faith in His purposes for the family that will stand long into the future. She continually reminded us in her writing and speaking that the well-being of the God-ordained family was the most important responsibility political parties carried.

History, such as it is today, may trivialize the contributions that this force of nature made in her days on this earth; she was after all a woman of the intellectual right, not the political left. However, I suspect they were not forgotten when she crossed the â€œbarâ€ and was told, â€œWell done, good and faithful servant.â€

The ERA of Phyllis Schlafly was last modified: September 6th, 2016 by Michael Giere

Well, she lasted a lot longer than her archaic views on social issues lasted. She was born in the wrong century.

RIP Phyllis. Thank you for your pioneering spirit and hard work. I hope you didn’t leave any cash to the Cruzbot daughter of yours that landed you in court. One should not treat their mother that way.

My Grandmother told me to say only good things about the dead. So. Phyllis Schlafly is dead. Good.

She wanted to jam her beliefs down everyone else’s throat by way of legislation. Anyone who didn’t believe as she did was her enemy. That’s not the way we work in this country.

Give it a rest. Why must you Democrats be so mean and nasty?

Because it is their nature.

Awesome news that they are haunting here, we must be taking a toll.

I’m a Democrat. For 30 years I’ve been called names I wouldn’t call an egg-sucking cur dog – – – by Rush, Coulter, Beck, Malkin, Gingrich, and damn near every Republican I know. Three weeks ago, because he didn’t like my Hillary bumper sticker, a Republican asshole with a Virginia Tea Party license plate on his truck told me “You Democrat sons-of-bitches should be shot.” Then he pulled up his shirt to reveal the pistol on his hip.

And I’m the one who’s mean and nasty?

I’m an amateur compared to you Republican mofos.

Don’t believe me? Read Gingrich’s memo to his GOP colleagues telling them the exact words to use to refer to Democrats.
http://www.informationclearinghouse.info/article4443.htm

Well thanks for clearing that up for us, we won’t hold you against other democrats.

I’m very sorry for any offense those mean people have caused you.

You should have filed charges if true — I don’t believe you.

Thanks for the link, Newt’s advice is timeless.

You do realize that talk show hosts don’t know who is listening — you should change the channel.

You missed the point. But that’s what I expect from rightwingers.

I did file charges. Cost the bastard $500, 6 month’s probation, permanent loss of his firearms, and permanent loss of concealed carry permit. He knows where I live and now he drives past my home once a week or so, blows his horn, gives me the finger. Which is what I expect from you people.

And that is why you will always fail.

I’m glad you filed charges, there isn’t a person on this forum that would side with the brandisher.

But just as we don’t judge all democrats by your sorry example, please don’t judge us by your preconceived notions — you’re supposed to be the party of sweetness, light, and understanding. I fear you microaggress.

That IS the way you work, but not for very much longer.