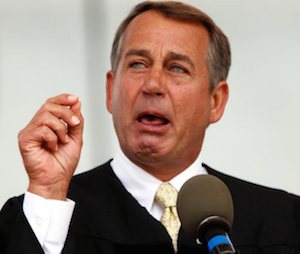 â€œMost often in Washington, â€œcompromiseâ€ is a euphemism used by weak leaders to describe their own failure.â€

Most of us have worked for feckless bosses at some time or another. These are people who might be fine men or women, but simply donâ€™t have what it takes to be leaders. They fail, they frustrate, and they invariably create more problems than they ever solve.[read_more]

But, they arenâ€™t leaders.

The 61st, and current Speaker of the House, John Boehner is such a fellow. He is a failed Speaker by any standard, and he has caused much damage to his country and his party.

Â° He has extended and enabled a President who openly disdains the citizens he swore to defend and protect.

Â° The Speaker has folded like a cheap suit at every turn of policy, while whining that he could do nothing.

Â° When called to lead, he has shrunk from his Constitutional oath and duty.

Â° The last two years should have been a nightmare of confrontation over principle for Barack Obama – instead a reckless and dangerous man has had virtually unchallenged power to â€œremakeâ€ a nation fitting his collectivist radicalism.

Now the question for the incoming House members, and the eight-member Virginia Republican delegation – including newcomers Barbara Comstock and Dave Brat: will they vote on Tuesday to begin national renewal with a new House team â€“ or more national failure by voting for John Boehner as Speaker?

Republicans need to elect new leaders, preferably with real world experience, who understand that compromise is not a strategy, and is virtually never an effective negotiation tool unless it involves minor differences.

Most often in Washington, â€œcompromiseâ€ is a euphemism used by weak leaders to describe their own failure.

Proactive, productive negotiations, particularly with a hostile counterpart like Obama, must be collaborative in nature, where two parties competitively advance their positions, and finally co-operatively seek to find a way forward. Anything less than that is capitulation.

For many of us, the choice seems clear for the incoming Congress; stand up with the working men and women of America and do the right thing, for the right reason.

Here is our Virginia GOP House Delegation: call them, and ask them to be heroes for the Republic.

Dave Brat is the only Representative that has any courage. The rest are complete and total failures. Comstock you are a fraud!

535 of our elected officials live in the protective bubble of DC. They go there to maybe do some good, but they aren’t there 24 hours and that notion is wiped out of their brains. It takes a person of very strong character to resist the established “rules”. You can count on one hand the ones in the Senate. If there is any hope for the House, it remains to be seen. John Boehner’s agenda is to bow to Obama, for whatever reason that is. Why most people cannot see that is beyond comprehension.

If the 114th Congress went home on Friday, the country would be better off. There are no leaders in the Republican Party. We all know what should happen, but it won’t. For the ones that do stand up, life will be difficult if not impossible. They will be lied about, they will be scorned, they will be diminished and political hell will rain down on them. Pray for them, support them, and send them ‘atta boys’ every chance you get. Winning in November is not going to stop Obama, although that was the point.

You’re blustering into the wind as usual. This election was held in November.