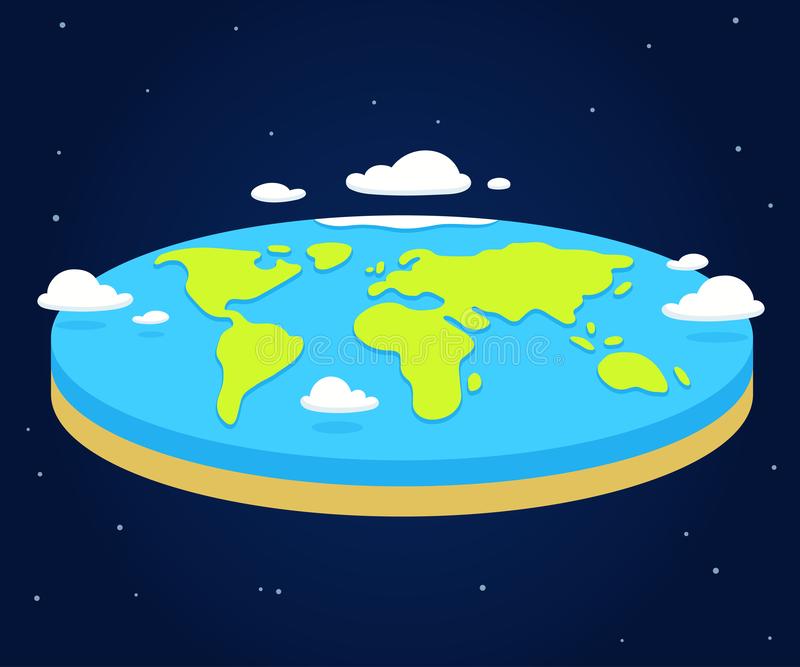 The advent of the 21st Century has seen revival of a presidential tactic which I call The Flat Earth. Its application has the president claiming (or declaring), with the conviction of a true believer, something that he must certainly know to be false â€“ i.e., something on the scale of a claim that the earth is flat. Not only does he claim it, but he issues orders and implements policies based on the premise that his claim is absolutely true. (So far, no president has yet declared that the earth is literally flat, and insisted that we believe and act upon it, but the century is still young.)

In the previous century, only a couple of presidents used anything like the Flat Earth tactic. Woodrow Wilson declared that colored people were mentally fit to work only as janitors, cooks, waiters, orderlies, etc., in the federal civil service. He was the last president to have a living memory of the Confederate Army, so perhaps his childhood in ante bellum Virginia formed his opinion of dark-skinned people. Whatever his motivations might have been, his Flat Earth orders introduced new racial tensions, caused a resurgence of the Ku Klux Klan and doomed us to another half-century of Jim Crow racism.

(Wilsonâ€™s occupational segregation of the Civil Service was finally reversed by President Eisenhower in 1953.)

Those presidents were progressive Democrats, of course. And now two 21st century Democrat presidents have dusted off the Flat Earth tactic and put it back in play. In 2008 a flashy, dynamic young senator â€“ virtually unknown to most voters â€“ ran around the country proclaiming that we could â€œspend our way to prosperity.â€ He promised to stop the rise of the oceans and â€œheal the planet.â€ Media hard-ballers, who should have called him on at least some of that schtick, stood by with dazed looks as Barack Obamaâ€™s â€œhope and changeâ€ parade romped past. His Flat Earth-type declarations got him elected, and even re-elected â€“ causing some progressive true-believers to think his was an era of genuine hope. But like literal claims that the earth is flat, none of Obamaâ€™s claims turned out to be true.

Now we have Good Old (moderate) Joe Biden (with his toothy smile), tossing out Flat Earth claims all over the place. Weâ€™ll review a few of them in the following paragraphs.

On his very first day in office, Joe proclaimed that men who say they are women actually are women, and must be treated as such everywhere in society. This means they can use female locker rooms and rest rooms, join womenâ€™s groups, and compete in womenâ€™s athletic events.

The latter practice has aroused some opposition in backward states and localities where biologically female athletes donâ€™t like being defeated by boys dressed up in drag, in contests they should have won. Some ladies who have lost races to the ersatz-girls say the losses cost them college track-scholarships. And a few of the aggrieved parties have sued on grounds that Federal Title IX statutes were violated when biological boys were allowed to compete in womenâ€™s athletic events.

So far, no definitive rulings have been handed down. Savvy observers say courts are waiting to see which way the public opinion â€œwindâ€ is blowing before they rule on the transgender matter. Meanwhile, Mr. Biden is standing pat on his diktat that a male actually becomes female just by saying so. Biden spokes-guys and -gals â€“ biological or not â€“ are urging Americans to accept this compassionate new reality. â€œAfter all,â€ said one wag, â€œWho cares about a few girl-jocks who didnâ€™t get the blue ribbon? Theyâ€™ll get over it.â€

Maybe so, but Mr. Bidenâ€™s Flat Earth transgender order has also impacted the US military. He has cancelled President Trumpâ€™s order which kept transgendered people from joining any service branch. Democrats support Bidenâ€™s move as a wonderful advance in diversity. Politically hip military brass are fully on board, but other military experts say it will degrade unit cohesion and discipline. Veterans note that cohesion and discipline are not just â€œnice to have,â€ but are critical to a unitâ€™s fighting readiness. â€œTransgender-diversity,â€ said one (anonymous) veteran, â€œhas no military-value. Itâ€™s just a cosmetic property that should never be a recruitment-objective.â€

Flat Earth Claim #2 â€“ Climate-change will destroy us, but we can stop it

Another of Mr. Bidenâ€™s radical Flat Earth declarations has been his insistence that climate-climate is a mortal threat, but that we can stop it by abandoning the burning of hydrocarbon fuels. Scientists riding the gravy train of climate-research funding are all-in with this, but other scientists differ on â€“

Despite these actual science-based objections, Mr. Biden and his liege-men, -women, and -others insist that we must believe that climate-change will destroy us unless we dismantle the greatest economy in history by relying on windmills and solar panels for electric power.

Flat Earth Claim #3 â€“ There is no Immigration Crisis

The New York Post has reported: â€œSo many unaccompanied migrant children are entering the country right now that federal agencies responsible for housing them are nearing capacity, even as they scramble to find more facilities, including US military bases and temporary tent shelters.â€

Nevertheless, with the cooperation of liberal-slanted Mainstream Media organs, which persistently avoid airing video-clips of the thousands of foreign illegals crossing our southern borders, Mr. Biden continues to claim that his executive orders have not caused an illegal immigration â€œcrisis.â€

To â€œproveâ€ his Flat Earth claim that our borders are under control, Mr. Biden has asked VP Kamala Harris to oversee and report on the border situation. Ms. Harris has (laughingly) delivered various public statements, but has not deemed it necessary to actually visit any points on our southern border. Her latest declaration blamed â€œextreme weather disastersâ€ â€“ undoubtedly produced by climate-change â€“ for the increased influx of people seeking refuge from southern countries. (She did not explain why those refugees would consider the USA a â€œsafeâ€ haven, in view of Flat Earth Claim #2, above.)

Customs and Border Protection officials say they encounter 3,000 to 3,500 illegal aliens attempting to enter the USA every day. For the year, this could total between 1.1 million and 1.3 million illegal entries. But not to worry â€“ Good Old Joe assures us that itâ€™s â€œnot a crisis,â€ and demands that we believe it.

Joe Biden probably knows this, first hand, because he hails from Delaware. Why would this give him special insight on racism? Because Delaware was one of four slave-states which chose not to join the Confederacy in 1861. Delaware was a southern state, with southern racial attitudes which its citizens retained well into the 20th Century. This is why Joe got along so well with those old-time, racist Southern Democrats. He knew how to talk the talk, walk the walk, and wink at the right times.

(Maryland, Missouri and Kentucky were the other slave-holding Border States which stayed in the Union during the Civil War.)

Democrats today would almost certainly be proclaiming that minorities are fleeing the USAâ€™s â€œsystemic racism,â€ were it not for the fact that millions of brown-skinned foreign people are knocking down doors and climbing over walls to get in. (See Flat Earth Claim #3.) One of the problems with using the Flat Earth tactic is that eventually you run into a contradiction which simply canâ€™t be explained away. Claiming that our extreme systemic racism hurts minorities who desperately want to get in is an obvious non-sequitur. Both Flat Earth claims cannot be true. In fact, neither is.

This two-pronged FE claim â€“ spouted by officials at every level, up to the presidency â€“ is so absurd that I almost declined to treat it seriously. So much evidence has emerged of increased crime in locales that have cut their police-funding, that even Democratsâ€™ Big Media pals have not been able to suppress the grim news. Dedicated officers are staying on, trying to protect the public they are sworn to serve, but others are hanging up the uniform and calling it a day. â€œOur lives are on the line out here,â€ said one. I’m not risking a murder-rap for shooting some perp in a violent altercation. I didnâ€™t sign up for that.â€

Nevertheless, the anti-cop parade marches resolutely onward, while millions of decent, hard-working, ordinary Americans wonder what in the world is happening to their communities and their country. Prudent citizens are emptying the shelves of gun stores, while Congressional Democrats work on gun-control legislation to ban scary-looking â€œassault weapons,â€ which account for only a few fatal shootings per year, across the country. Consistently ignored is the fact that persons of â€œill intentâ€ are never touched by gun-control laws because they simply ignore them.

Say, havenâ€™t we heard that song before? Evidently Good Old Joe and his inner circle thought it worked so well for Barack Obama that they decided to make it the centerpiece of their governance. In his first four months in office, Joe has become a spending machine. Printed money (which we donâ€™t really have) has been flowing out of Washington like water, pushing the National Debt to $28 trillion by March. Biden Administration plans for â€œinfrastructureâ€ and Green New Deal spending would send the Debt past $30 trillion, if implemented. â€œNo problemo,â€ says Joe. (As FDR famously said, â€œWe owe it to ourselves.â€)

Democrats love big spending because it helped them hold the presidency for 20 years (1933-â€™53) and the Congress for most of 62 years (1933-â€™95). Dems figured out that they could win majorities with lavish spending, while Republicans became a permanent minority by acting as â€œtax collectors for the welfare state.â€ It was a brilliant strategy that worked beautifully, until Ronald Reagan kicked over the table by rejecting the tax collector role. His reduction of the top income tax rate to 28% spurred an unprecedented economic boom.

Deficit-spending â€“ which not even Ronald Reagan could overcome â€“ also produces inflation of the currency by sending more dollars chasing after the same goods. Democrats love inflation for at least two reasons:

A few fussbudget-economists are warning that Joe Bidenâ€™s big spending will produce big inflation, but Democrats arenâ€™t saying a word. Their lips are sealed. They think the spending-our-way-to-prosperity Flat Earth claim is working, and theyâ€™re sticking with it.

The Biden Administration, allied with Democrat-majorities in both houses of Congress, and solidly supported by left-leaning media organs, will push Flat Earth claims in at least these six areas, with more added as necessary.

In response, the American people will show if theyâ€™re smart enough to be truly capable of self-governance. I hope they are, but weâ€™ll see. These are dangerous times, and free stuff is a seductive lure.

The Flat Earth Tactic was last modified: May 23rd, 2021 by Woody Zimmerman