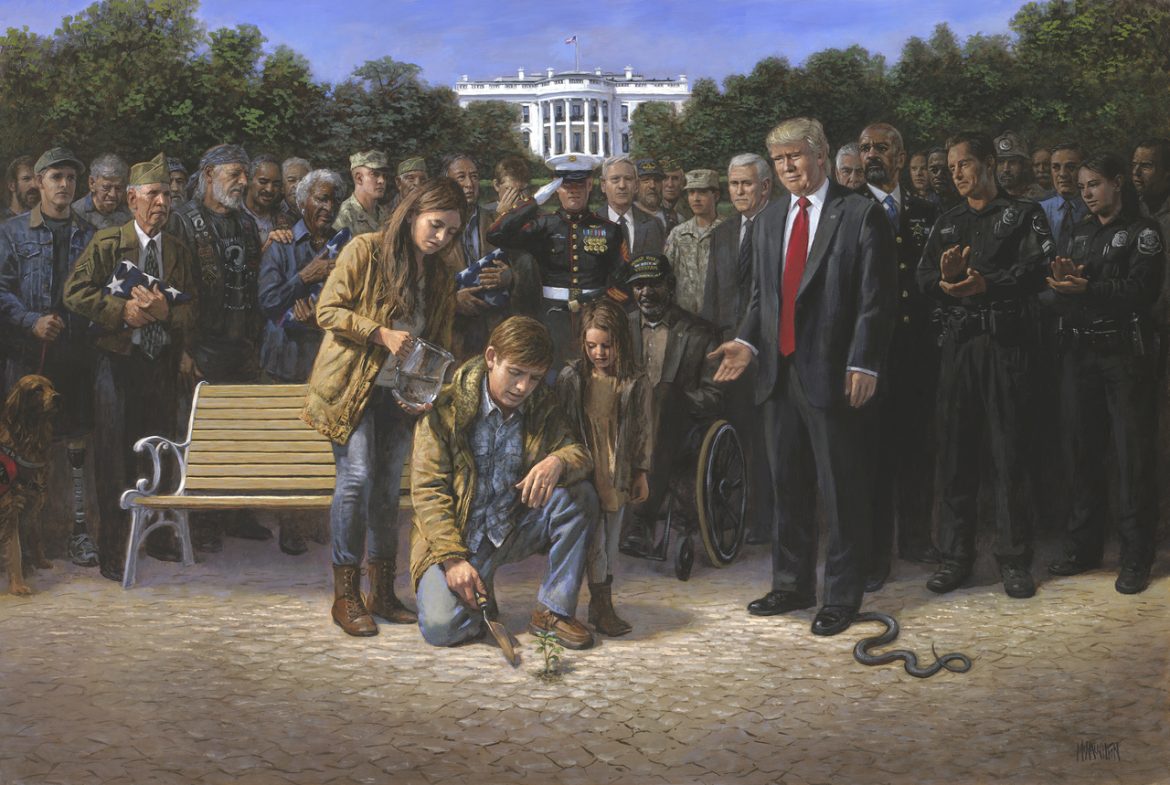 You are not forgotten by Jon McNaughton

In 2007, Amity Shlaes published the bestseller “The Forgotten Man, A New History of the Great Depression.” The book looks at the great depression through a historical lens with the lessons learned from an over-regulating government.

The Forgotten Man is about the Great Depression that concludes that the New Deal did not save us, and Presidents Roosevelt and Hoover may have done more to damage the American economy than previously thought.

Franklin D. Roosevelt most famously invoked “the forgotten man at the bottom of the economic pyramid” in a 1932 campaign radio address that went on to be known simply as his “The Forgotten Man” speech.

His words shocked many in his party because of their suggestion of class conflict in America. He came to believe that his party’s future had to be reconfigured so that it rested on “the forgotten, the unorganized but the indispensable units of economic power” found in the American working class, what we now call the blue-collar worker.

Observing a predatory, progressive tax code, Shlaes correctly concluded that “Any man of energy and initiative in this country can get what he wants out of life. But when the initiative is crippled by legislation or by a tax system which denies him the right to receive a reasonable share of his earnings, then he will no longer exert himself, and the country will be deprived of the energy on which its continued greatness depends.”

Fast forward to the 2016 presidential election when President-Elect Trump declared: “The forgotten men and women of our country will be forgotten no longer,” a concept proffered by many of his presidential predecessors.

But President Trump took it a step forward and delivered on this concept. Despite universal Democrat “resistance” and dragging many of his party kicking and screaming, he validated the forgotten man.

So who is the forgotten man? Why will he, again, drive the re-election of President Trump? Why do Democrats eschew the Forgotten Man in favor of liberal coastal elites?

The Forgotten Man wants the government to work like he was taught in civics class but can’t tell you which aspects of its behavior are constitutional. The Forgotten Man hopes he is never in front of a judge in a courtroom, but if he does, he wants to be judged by someone who knows it by memory.

Candidate Trump tapped into that hopelessness as had many candidates before him, but this time he harnessed it and fulfilled it, rather than exploit it.

Candidate Trump emphasized the revitalization of the manufacturing sector and the millions of people, regardless of race or gender, who had not transitioned to the supposedly new “service economy.” Then President Trump went out and did what he promised.

The Forgotten Man remembers President Obama telling them manufacturing jobs and factories were gone and weren’t coming back. They remember President Obama commenting on candidate Trump, “He just says, ‘Well, I’m going to negotiate a better deal.’ Well, what, how exactly are you going to negotiate that? What magic wand do you have? And usually, the answer is, he doesn’t have an answer.” The Forgotten Man understands the metaphorical phrase, “Hold my beer.”

Now that the Forgotten man (and woman) have had a robust job market and rising wages, why would they vote to reverse it? Why would minorities who are sharing in the robust US economy for the first time in decades want to go back to 2015 policies? Pass out the Keep America Great 2020 hats. The Forgotten Man is making a comeback!