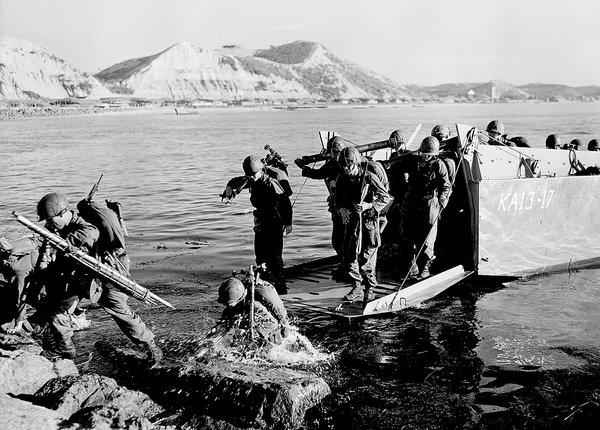 The Great War was, of course, WWII.  We defeated a socialist Germany, thus saving Western Europe.  We defeated an Imperial Japan and introduced the era of atomic weapons.  What I most remember are the hollowed-out figures from the NAZI death camps and the utter devastation of Nagasaki and Hiroshima.

The Korean War is called the Forgotten War because it was sandwiched between the glories of WWII and the sorrows of Vietnam.  The loss of American lives approached 55,000. For comparison, over 400,000 American lives were lost in WWII and some 58,000 were lost in the Vietnam War.   What I most remember were the stories of the human wave assaults on the American soldiers. Huge numbers of the enemy would run into the withering fire of American weaponry.  At some point, the Americans would run out of ammunition and barbaric hand to hand combat then began. The Korean War is not officially over. It is in stasis under the terms of an armistice.

The Vietnam War was an anti-war war.  While Americans fought and died in the jungles and fields of Southeast Asia, the nation was beset by the phenomena of Americans at home repudiating the military in the field.  Eventually, the anti-war political pressure, much of which still exists today in the Democrat Party, stymied the war efforts and led to an ignominious departure from Vietnam.

But back to the Korean War.  President Donald Trump has to be praised for taking a risk in the hope of peace.  His predecessors, both Republican and Democrat, ignored the growing threat of North Korea.  They allowed this threat to fester unattended until North Korea’s nuclear warheads and missile delivery systems were pointed at many of America’s Pacific allies as well as every State in the United States of America.  The choices to resolve this situation were few, and hopefully the recent Kim/Trump summit will lead to a reduction of hostility, the denuclearization of North Korea, and the eventual reunification of North and South Korea.

President Trump has just been nominated for the Nobel Peace Prize.  President Reagan should have gotten one but the politics of the Nobel committee are substantially skewed to the socialist left – and handing a Peace prize to a capitalist is just simply not done.  (My guess is the socialists will find a way to give the Prize to somebody other than President Trump. Maybe basketball great Dennis Rodman, who deserves much credit for opening a small crack in the defenses of the North Korean Hermit Kingdom.  Nixon had his ping-pong diplomacy with China and Trump has his basketball diplomacy with North Korea.)

In a strange twist of the political winds, the naysayers are opposed to “Giving Peace a Chance”. They prefer to continue with the anti-Trump rhetoric or give credit to “little rocket man” Kim. I don’t think President Trump cares as he is a results-oriented tough guy.  I kind of like that.

It is nice to see thought from a deeper well now and then. Congratulations on well done!

I would point out that Vietnam was the first guns and butter war. The folks at home really didn’t have to sacrifice as part of the war. LBJ put together his Great Society while the Vietnam war was underway. The lack of shared sacrifice, so important to the fighting and winning of WW2, was missing.

If we had only known that all we had to do was salute the communist dictator and give him anything he wants, this could have been settled long ago. So I see now what your beef was about Obama and Cuba…he didn’t cowtow enough!

I have a different take on the salute. I see it as a not so subtly reminder to the North Korean delegation that President Trump is Commander In Chief of the world’s most powerful military.

Giving them what they want? Seriously? That’s the best you can do?

I don’t see this President approving planes taking off from DC loaded with billions in gold, Swiss francs, and Euros destined for Iran. Oh but, but, but that wasn’t for release of hostages – we owed that to the Iranians!

I don’t see this President capitulating to Hezbollah thus creating even more of a powder keg in the Middle East and emboldening those who wish to see our destruction.

I don’t see this President bowing to those countries that demand the Kyoto Accord that would choke hold our economic growth over standards that would only be obeyed by us.

I don’t see this President backing down on the stacked against the US trade deck by backing off leveling the tariff playing field. (Do your tariff homework, Sparky – Obama gave away our advantage.)

I don’t see this President playing identity politics and turning a nation against itself in order to create an us against them mentality on our own shores.

If you want to see faux pas – and more than once, see below. Where was your indignation then?

So tell me, Comrade, what did we get out of agreeing to halt exercises with our allies?

Yes, comrade, that is what happened in the swamp.

Yes, all of this was a Great Puzzle to me for years on end. Only recently and post-Trump’s election, it has come out that North Korea was a Deep State base of operations for things wanting to be done that would have never born the clear light of day. If true, then here is so outlandish an idea that I would have never thought of it in a hundred years. And yet, if there is even a grain of truth in it, then much suddenly is explained which cannot be otherwise made sense of. Now I have to wonder, just what is the real history of North Korea which yet remains to be written?

Trump – gave away a huge bargaining chip for a photo op. Got nothing. Yes, you have quite a swamp there around Trump to be sure. One of his own making.

Getting back 3 American hostages doesn’t count. Having the leaders of North and South Korea meet doesn’t count. Getting Kim to blow up at least one nuclear test site doesn’t count. Getting Kim to stop launching missiles in the direction of Japan and USA territory doesn’t count. Eric, as with most of the left, would prefer nuclear war and the loss of Chicago to anything that might give President Trump credit. He is the worst of sore losers and like Maher wants all Americans to suffer for the result of the election. Hillary is a traitor, but she is their traitor and they will defend her at any and all cost to America and her citizens. Never forget that Jane Fonda continues to walk free because of them.

Two of those three prisoners were lost under Trump, the (liberal) president of South Korea drove the North/South meeting as a spin-off of the olympics. Trump/Pence disapproved (visibly). The test site was no longer necessary – they are done with their tests. But we DID commit to stopping exercises with our allies in exchange for absolutely nothing (and in the process validated and promoted a communist tyrant). I am sure Reagan would approve…as if…

Tell me. How were they lost. The kid slaughtered by Kim was “lost” under obama and returned dead to trump. See all these Americans went willingly to NOKO so this idea that trump lost them is just you spouting idiocy.

They were likely all spies, y’know. The point is that they were recently arrested. Pompeo rightly made their release a pre-requisite of having direct talks but our position overall was not better than before Trump took office after they were returned. Also, they were not something we got for stopping exercises with our allies as you stated. We got nothing for that capitulation.

It is indeed the entire Establishment of Power which is willing to risk everything provided that the Looting of American and the wider World can go ahead unimpeded. And regular Americans and their children are endlessly given up as the sacrificial lamb to the God of Looting. My hope is that Trump and his backers will put an end to this vicious cycle of profiteering and the now well over million needless deaths, the blood price of war without end.

This comment strikes me as more a buttress to the kind of Endless War climate as has been created, nurtured and fostered in America as long as I can remember.

How about the Rocket Man was given an offer he could not refuse, and at the same time a set of alternatives that were so unpalatable than no man,sane or not, would want to embrace? Suggestive language from Trump during the primary season carries with it the idea that Korea and options were something the backers of Trump had taken up long before Trump ever launched a candidacy.