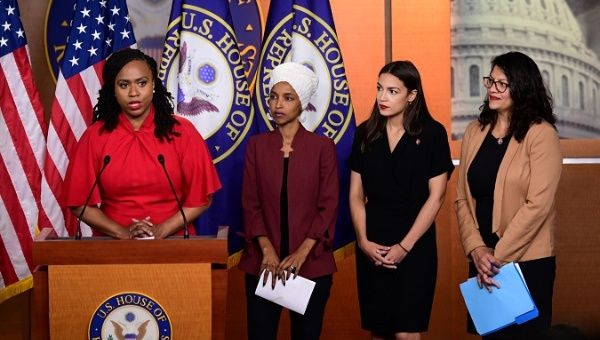 The four horsewomen of the apocalypse

There are four Congresswomen who viciously attack both President Trump and America.  These women view the nation as hateful. President Trump admonished them for their vile words and behaviors, but he, in turn, has been admonished for suggesting that they go home and come up with better ideas than the Constitution, Bill of Rights and Declaration of Independence.  So far, they have no better ideas – just banalities intended to run down an America which has given them so much.

What is most distressing is that this “squad”, rather than being condemned, are supported and defended by their Democrat colleagues and certain Trump hating elements of the Republican establishment.  Rather than deal with the implications of what they utter, these women have been excused or even praised. However, what is at stake?

First, these women stride before the press and other Americans as if they were conquerors.  Already they have supplanted the leaders of their party and listen to no one who would constrain them.  These women already condemn those who they disagree with as unworthy deplorable humans. Second, these women will take peace from the earth.  They have said so repeatedly in various ways. In their condemnation, they suggest destruction of virtually every aspect of Western civilization and its replacement with totalitarian tyranny. Third, to them humanity is secondary to the needs of the environment.  The scales are already biased. Justice is not blind and the finger of accusation has been pointed at man regardless of the truth. Fourth, death is the outcome they offer, and it does not matter by what mechanism. Invasion is everywhere and with it famine, plague, and increasing violence.

The four horsewomen of the apocalypse cannot be discounted.  While they are viewed rightfully as absurd, they are not to be ignored.  They are the enemy inside the gates of American and western civilization and they are without any moral constraints.  Ignore them or ridicule them at your peril.

The four horsewomen of the apocalypse was last modified: July 17th, 2019 by Dr. Robert Warren