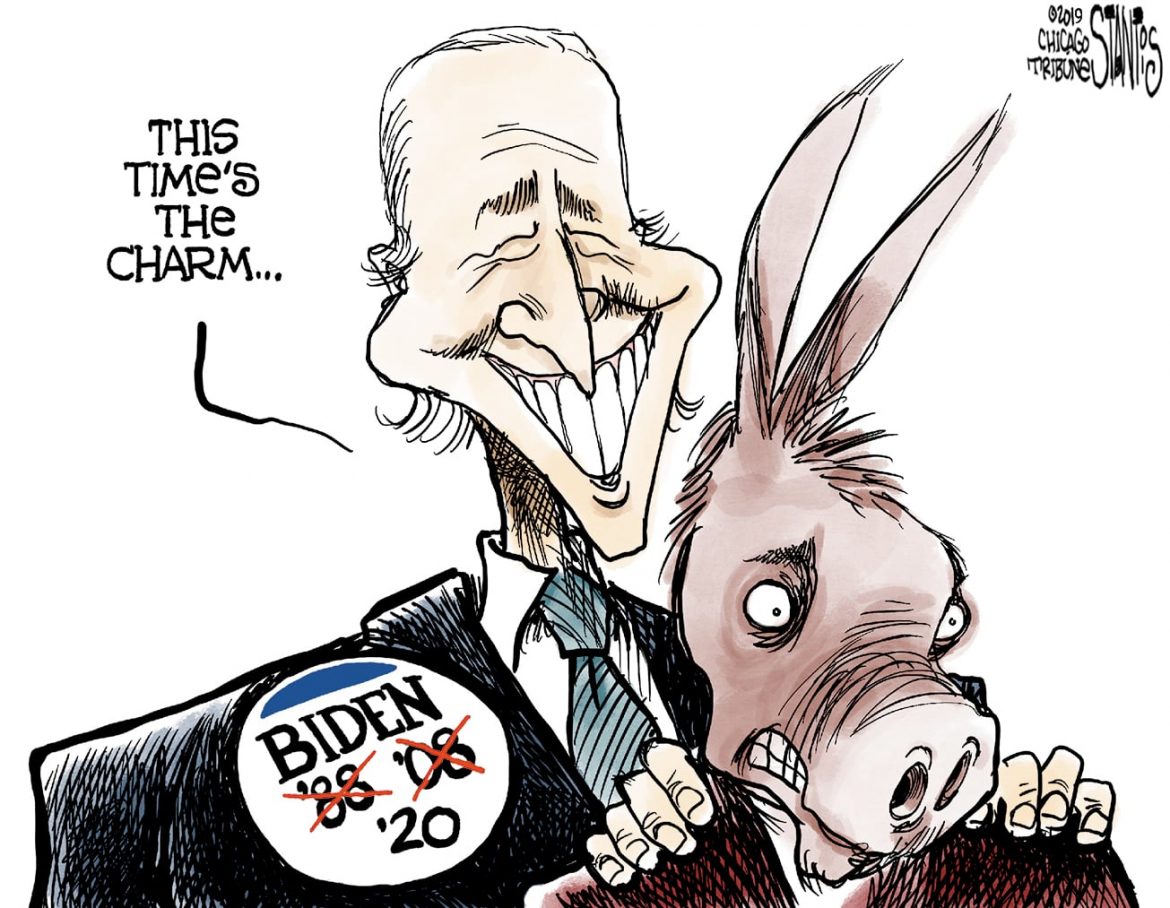 The Fright-campaign and the Tipping Point

Al was rattling the crockery and muttering to himself as I entered his coffee shop last week.

“The country’s gone nuts,” he said, as I ordered my usual Caffeine-TNT Monstroso. “What in the world is going on in those Democrat-run cities? Do they really think all that smashing, burning, looting and violence is going to get Joe Biden elected?”

I admitted that things were looking pretty crazy, and I sat down to help Al figure out what’s happening. I pointed out that, first of all, the Dems and their PR-allies in the media seem to think that they’ve succeeded in hiding the riots from the rest of the country – either by not airing the true events, or by continuing to characterize them as “peaceful demonstrations” being conducted by people upset by “systemic racism” or “police brutality.” I have personally met people who still think these are just “protests” about the death of George Floyd. The news-organs they watch have not shown the shop-windows being smashed and the looting and burning.

Secondly, leftists appear convinced that they have successfully frightened Republicans into silence with their tactic of immediately denouncing as “racism” any criticism of those demonstrations or of the Black Lives Matter/Antifa gangs that are fomenting them. The tactic applies to politicians, business-people, sports-figures, and even ordinary folks who might have the temerity to speak up. If you dare to raise questions about the riots, you’re either mocked as a “delusional conspiracy theorist,” or denounced as a vile racist who must be denied inclusion in the normal commerce and social activity of the country. 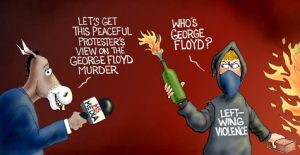 Thirdly, leftists – including a growing faction of the Democratic Party – have (as we used to say) started “drinking their own bathwater.” This indelicate metaphor means that they are now swallowing their own propaganda about political attitudes across the country. In particular, this involves polls showing Joe Biden with huge leads over Mr. Trump – leads which anyone who has seen recent clips of Mr. Biden knows cannot be true. Recent memories of polls showing Hillary Clinton with similar leads, in 2016, are not deterring Democrat-leaning reporters, pundits and pols from proclaiming that it’s “in the bag for Joe.”

Part of this political “delusion” that Democrat strategists have engineered does involve Mr. Biden, of course. Realizing that their candidate cannot be trusted to speak coherently for more than a sentence or two about anything more complicated than the hair on his legs, Joe’s handlers have kept him penned up in his basement – safely protected from any nosy reporters who might spill the beans about the former vice-president’s obvious mental failings. Occasionally they release heavily redacted clips of Mr. Biden trying to make some sage declaration about the virus or the economy. But they never let reporters interact with Mr. Biden in a genuine question-and-answer forum. They know it would be disastrous.

This so-called “basement strategy” has been somewhat successful – possibly leading the politically unaware man-on-the-street to say, “Joe Biden? Sure, why not?” or “Who cares? They’re all crooks.” Those attitudes do exist, but I still haven’t met a voter who plans to pull the lever for Joe Biden because he’ll exercise the dynamic leadership needed to fix Problems A, B, C, etc. Instead, I hear hackneyed complaints about Mr. Trump’s crude style, or claims that he “lacks moral authority.”

Yellow-dog Democrats are all in for Good Old Joe, of course, because they know he’ll stock his administration with hordes of Trump-haters, Marxists, race-hustlers, Muslim-sympathizers, gun-banners, practitioners of bizarre sexual practices, abortionists, radical educators, representatives of all 56 genders, and a vast throng of big-government aficionados panting for a Green New Deal that will have us all pedaling rickshaws, freezing our butts off in dirt-floor huts, and cooking over fires of dried buffalo-shit. 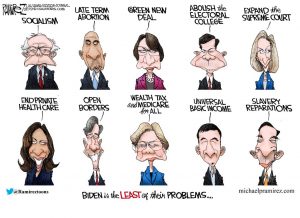 All these will be the Dream Team for true-blue Democrats. They don’t really care who’s in the #1 spot, and would probably nominate Lucifer himself, if they thought he could persuade, fool, or frighten enough voters to win. The cast of actors brought into a Democrat administration are far more important than the top guy. Good old “Lunch-bucket” Joe – who probably never carried a lunch-bucket in his life – will be only a figurehead, if he wins; and a short-timer as well. Fifth-graders know that Joe will suffer an “unfortunate accident” or a debilitating illness soon after he’s sworn in. That’s why his VP-pick is so important.

I got so animated relating all this that I spilled my coffee. Al refilled my mug as I went on to explain that “fright” might be a major factor in both the polls and the selling of the Democrats’ candidate. With respect to those polls showing Joe Biden with huge leads over Mr. Trump, studies are emerging that show a high percentage of Republicans – perhaps as many as 77% – saying they won’t express support for Mr. Trump to pollsters, for fear that their addresses and identities could be disclosed to parties who might do them harm. 64% of moderates also say that they falsely indicate a preference for Mr. Biden as a cautionary measure. Political analysts believe this false reporting might explain some of Mr. Biden’s high levels of support in certain polls.

But Democrats are also employing fright in a more direct and disreputable way in this campaign. In 68 years of following presidential politics I have never before seen an American political party use the threat of violence as a weapon to frighten voters into choosing their candidate. The closest any previous candidate came to that was Alabama Governor George Wallace, who ran for the presidency in 1968 as the candidate of the American Independent Party, on a segregation platform.

Mr. Wallace didn’t threaten violence. Instead, he appealed to voters who wanted a return to the way things were when the races were segregated and “everyone knew his place.” He succeeded in winning 14% of the overall vote and 45 electoral votes of five southern states. Richard Nixon carried the Electoral College, with 302 votes. Historians believe Mr. Wallace might have enabled the GOP win by drawing off votes of Southerners who would ordinarily have voted Democrat.

What’s happening today is a horse (or donkey) of a different color, however. Democrats are signaling to voters, both implicitly and explicitly, that those “peaceful demonstrations” in various cities – which voters are increasingly recognizing as violent riots – will continue, and even spread to their tranquil suburbs, unless they elevate Joe Biden out of his basement and into the White House.

In the past, Democrats scared older voters with warnings that Republicans would cancel their Social Security checks and their Medicare. But this is a new day. This time their message is: “Vote for Joe, or gangs will beat you, burn down your house and destroy your neighborhood. And there will be no cops to answer your 911-call.” Is it any wonder that people won’t admit that they support Mr. Trump? I’ve always known that Democrats can play dirty, but this is a new low. 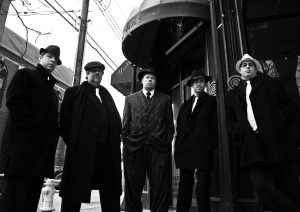 “We need you to vote for Joe…”

Will the tactics of fright push “Geriatric Joe” over the finish line? I don’t know. We have a large – and growing – population of elderly voters who were OK with Mr. Trump’s presidency, but who are in no shape to contend with violent mobs in the streets. Some of them might be frightened into voting for Democrats who seem to promise “peace.” It’s understandable.

But somehow I doubt that very many Americans will let themselves be strong-armed like this. We have a long history of letting ourselves be pushed around and pushed around – until the pushers finally push us too far. When that happens, we can react with unexpected ferocity. I sense that we’re getting close to that “Tipping Point” now. It’s like that moment just before a pot boils over on the stove.

As I’ve written before, the fright-campaign is a kind of blackmail. Once we’ve shown that we’ll pay it, there’ll be no end to it. This election is shaping up as a fight for the soul of America. Do we want the country we knew and loved? Or will we accept mob-rule?

The Fright-campaign and the Tipping Point was last modified: August 4th, 2020 by Woody Zimmerman