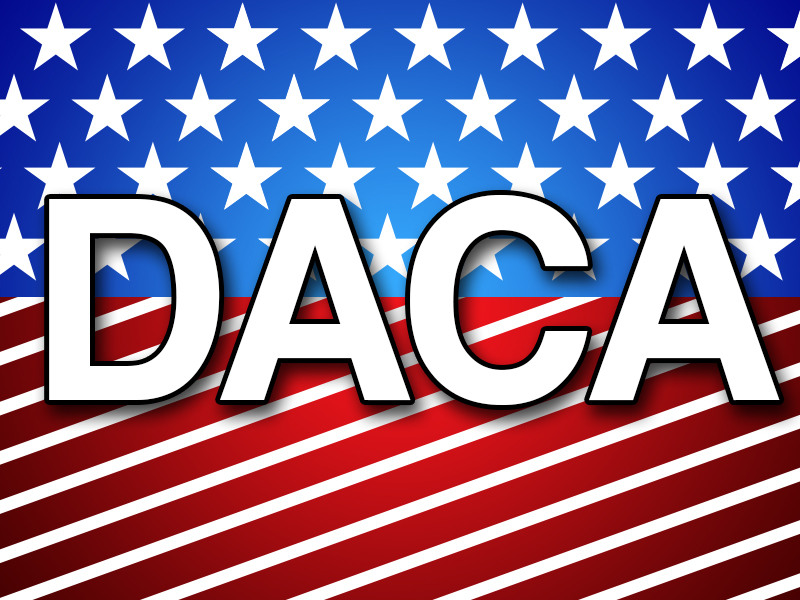 The fundamental problem with DACA

There is no question that the DACA children, many of whom are now adults and many of whom know of their parents’ illegal actions, have received substantial benefit from the American taxpayers.  From schools, healthcare, housing, food, and welfare, they are far better off than they would have otherwise been.  In other words, they have reaped the reward of law breaking thanks to the American taxpayer.

Supposedly, we are a nation of laws and not of rulers.  At times, this means that tough decisions have to be made to right wrongs, even when those wrongs seem innocent.  By the way, try telling a judge “I didn’t know” as the response is likely to be, “Ignorance of the Law is no excuse.”  Sadly, we had a president, Barack Obama, who recognized he did not have the constitutional legal authority to grant some form of amnesty yet, as any imperial ruler would do, he did it anyway.

It is difficult to find out just how many DACA individuals are in the country.  The figures quoted for a total number of such individuals in America is about 800,000, but it could easily be a couple of million considering that figure really only captures those who have self-identified as part of the Obama program.  Nobody knows for sure, but the lower number favors amnesty because the political class will argue that it is but a relatively small number.  If the truth is in the millions, they will just “ho hum” and issue a “we didn’t know” apology that really isn’t an apology at all.

The next question is how many work and how many are on welfare.  The numbers again vary quite a bit, but about half seems reasonable based on an Internet search of a variety of sources.  Actually, the number could be quite a bit higher but 400,000 working DACA individuals seem reasonable.  However, to be honest, it could be half or less of that number (unless there are actually millions of DACA individuals in the country).

The next question is how many DACA individuals are skilled and how many are unskilled.   I am sure the Bureau of Labor statistics could provide some numbers but the definitions continue to change so providing a number would be misleading.  However, since most of the DACA folks are relatively young, it seems reasonable to assume that most are going to be unskilled.  Thus, they directly compete with American citizen children seeking a first job and entry level unskilled Americans who may try to get off welfare and into the workforce.

The final vexing question is what to do with the DACA individuals.  The conventional wisdom is they can’t be thrown out of the country.  This is, of course, quite untrue, as there is precedent after World War II.  One can argue about the effectiveness of “Operation Wetback,” but not about whether it happened.  At this point, the political class, against the wishes of a large percentage of the American citizenry, seems destined to either grant some form of legal presence for the DACA individuals, all the way from semi-permanent restricted legal status to outright amnesty.  Of course, being the champions of virtue that they are, the political class may just do nothing.

If Congress, in its infinite wisdom or lack thereof, creates a pathway to legality for the DACA individuals, there will almost certainly be wave after wave of future refugees who will eventually overwhelm the country as has happened in California and is now happening throughout Western Europe.  The USA of the future will likely lose its history, its constitution, and its individual rights.  The seeds of historic destruction are being sown now in places like Charlottesville, Berkeley, Boston, and others.

I don’t think you appreciate the size of this endeavor just trying to identify how many classes are ESL. In addition, I suspect that a number of states would refuse to assist you just as they are refusing to assist Trump with his voter study committee.

Myself as an employer in Va. we must come together and start lobbying the NCCI (National Council on Compensation Insurance ) on lost premiums do to Va’s underground labor industry.

Reward? Should we reward Republicans for their lies come this November?

Should we reward the democrats for their abuse of the law in Charlottesville or for supporting illegal immigrants in our colleges? If I could, I would punish both for their calumny.

No, but then we’re right back to the old “Republicans suck but the Democrats will be worse” argument.

We’ve been using that for a couple of decades now, not much of anything to show for it. The march of progressivism continues unabated.

And progressivism leads to the same end as socialism – totalitarianism. Thus slavery, slaughter, and the end of American society.

I have many friends who are engineers at
Badcock & Wilcox and Areva, I tell them you guys are next.

Bring on the AI and the Robots. And yes, they are next.

There will be two good ways to make a dollar;
1)Let the wife work for the Fed, State , City or County
2) For the husband to start HUD rental housing.

It is a continuation of the global socialist agenda that is bent on destroying all national borders, particularly those of 1st world civilized nations like the USA. So far, they are succeeding by using the judicial process to slow down justice and undermining the various laws that should be executed. It is going to take the American people to directly confront this horrific situation. Can’t depend on any politician and maybe not even Trump who campaigned to right this obvious abuse of the rule of law.

They Campaign on the debt issue , complain about Americans on assistance, and then use America for the release valve for World poverty, is is all BS.

I personally believe that this third world immigration invasion will destroy all of the first world welfare systems. There is no unlimited amount of money but there is always an unlimited demand for welfare service. I think Thatcher said that the problem with socialism (welfare state) is that you eventually run out of other people’s money. The truth of her statement was demonstrated when California advocated a single payer type healthcare system and found out that it would cost something like $400B or two times their total budget. Annual operations under such a system would be $150B/year which is close to the entire budget. Similar type of situation with Sanders recent appeal for a single payer federal system. which would consume the entirety of the federal budget with a couple of decades or less.

If trump is going to give away all this free stuff ,
“the mad man Bernie will have to counter”.
That is what President donald Dangerfield said of Hillary while campaigning.

There is absolutely no fiscal restraint at all since Obama. The swamp is now overflowing uncontrollably, like the reservoirs in Houston during Harvey.

By devaluing our dollar it makes their gold increase.

Breitbart just published a very interesting set of data that supports Dr. Warren’s write-up. Here are a couple of tidbits:

5. DACA recipients are not taking U.S. jobs away from Americans

As a study by the pro-immigration group FWD.us revealed, an amnesty to DACA recipients would mean the hundreds of thousands of illegal immigrants currently holding jobs in the U.S. would be able to remain at those jobs, rather than those opportunities potentially opening up for American workers.

An ultimate end to the DACA program has the potential to open nearly 720,000 U.S. jobs for Americans, with the potential of more jobs in the future.

(THIS NUMBER IMPLIES THAT THEIR ARE MUCH MORE THAN 800,000 DACA TYPE OF FOLKS IN THE USA. LIKELY AT LEAST 2 TO 3 MILLION – AND MAYBE AS MUCH AS 4 TO 5 MILLION – UPWARDS OF 73 PERCENT OF MEXICAN AND CENTRAL AMERICANS ARE ON WELFARE.)

Though DACA has been touted by Trump as being a program for highly-educated illegal aliens, research by the Migration Policy Institute shows this is not the case and that a minority of DACA recipients have college degrees:

(THUS THE HIGHLY SKILLED CLAIM FOR INCLUSION IS BASICALLY BOGUS AND AMOUNT TO POLITICAL FAKERY FOR THE CONSUMPTION OF THE GULLIBLE OR THE ANTI-AMERICAN IDEOLOGUES.)

trump as a contractor/builder erecting a building is trying to build the roof before the foundation or the *walls* that would support the roof itself.
DACA at this point is defacto amnesty.

The Center for Immigration Studies (CIS) has published a new report called “Welfare Use by Immigrant and Native Households.” The report’s principle finding is that fully 51 percent of immigrant households receive some form of welfare, compared to an already worrisomely high 30 percent of American native households. The new study is based on the most accurate data available, the Census Bureau’s Survey of Income and Program Participation (SIPP). It also reports stark racial differences in the use of welfare programs.

Previous studies of welfare use have been based on the less accurate but more easily accessible data available from the Current Population Survey; this led to less alarming figures of 39 percent of immigrant households using welfare and 24 percent of native households. CIS’s Steve Camarota took the trouble to work with the SIPP data, which cover a larger number of welfare programs. His results have been independently verified by Decision Demographics, a company specializing in analysis of Census Bureau data.

Needless to say, the percentage of immigrants using some form of welfare varies enormously according to the part of the world from which they come. Rates are highest for households from Central America and Mexico (73 percent), the Caribbean (51 percent), and Africa (48 percent). Those from East Asia (32 percent), Europe (26 percent), and South Asia (17 percent) have the lowest rates.

This is all wrong for this to be happening.
I don’t hate nor care for the illegal alien that is someone else’s issue.
I would like to hang my hat here;
Go after the illegal employer get the scumbag white and black American deadbeat dad skirting his child support obligations by getting the 1099, so what if you catch an illegal.alien or 2.
And for those act of lovers, why don’t you speak out or up about their exploitation, oh you do, only sexual exploitation.

What is the driving force in human trafficking from.Central America?

I used to wear a shirt on the job that said;
George Bush gave 11 million illegal aliens Homeland Security.
This is more of a joke than a riddle from this Troll,
What kind of ship don’t float?