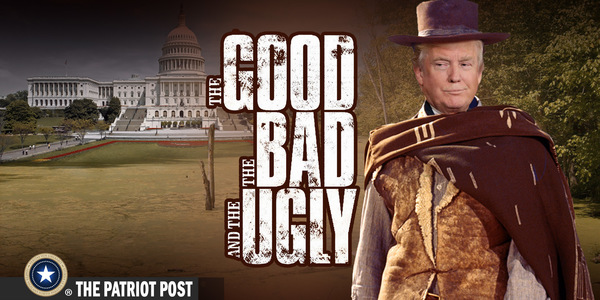 The Good and Bad of the Midterms–Part one

THE GOOD: — All of the Democrats’ star Senate and gubernatorial candidates, whom the liberal media and Hollywood have idolized, went down Nov. 6 – Beto O’Rourke with his “resting bitch face”;  Andrew Gillum (so tired of hearing about his ghetto upbringing); Phil Bredesen, always called a “popular ex Democratic governor,” trounced by Marsha Blackburn; and as of today, Kyrsten Sinema, idolized by the media for rejecting the Mormon church and living in a gas station in Florida as a kid, may not become the first openly bisexual Senator.  And, I don’t think Stacy Abrams, whom the media and Dems had hoped to be the first black female governor of a Southern state, will survive – but then, the liberals will claim “voter suppression” caused her defeat.

Republicans have expanded their control of the U.S. Senate, which gives President Trump close to a filibuster-proof majority to get his judicial and other political nominations to move forward.  We can expect a number of Republicans who lost to get key spots in the administration. I hope two of them will be Kansas Secretary of State Chris Kobach, who lost for governor of that state, and Lew Barletta, who was an early Trump backer in 2016 and gave up his safe House seat to lose to Bob Casey for Senate in Pennsylvania.

I would not be at all surprised if there are possible administration jobs for Barbara Comstock, Dave Brat and Scott Taylor, who all sadly lost their Virginia House races.  However, if Barbara has a few million left in campaign funds, she will be a formidable lobbyist on Capitol Hill.

As for the House, this “Washington Post” article gives me hope.   The author, James Hohmann, who is among the few Post reporters who is unbiased, writes:  “In several of the places I’ve traveled, there have been Democratic challengers who might win today in districts Trump carried but undoubtedly face spirited and expensive fights to survive next time when the president’s name will again appear on the ballot.”  Hohmann cites Abigail Spanberger in the VA 7th as an example.

Democrats won Congress in 2006-08 by recruiting many new faces, notably Iraq and Afghanistan war veterans who opposed George W. Bush’s policies, and they were pretty much all cleaned out by 2010 (Jim Webb, our former Senator in Virginia, was among them who chose not to run for a 2nd term). Despite Democrats picking up about seven governorships Nov. 6, Republicans still control most state legislatures and will influence 2020 redistricting.

In addition, many of these newbies have no elected experience and might not be able to withstand the rigor of being in Congress, dealing with family issues, raising money to sustain re-election, and having to deal with conflicting demands in their districts.  The media and liberals may be chortling now, but their idols will be smashed in the coming years.

THE BAD:  Democrats take the House and I have no doubt that Adam Schiff will now engage in a full-blown investigation of the Trump Russia connections.  This will dominate the airwaves even more than it has the last year. So, the administration and Trump campaign people need some good lawyers.  This will get ugly. Jeff Sessions has to un-recuse himself or resign. It was a big mistake giving his Senate seat up to be A.G.

I have no doubt that impeachment will be offered, or, a current Democrat bill to set up a process to remove Trump under the 25th Amendment will be the alternative.  And, despite people feeling Nancy Pelosi’s speakership is in doubt, guess again – she and the other aging leaders of the Democratic majority are not going anywhere.

In addition, you can kiss good-bye any attempts to revise the Affordable Care Act, unless the special interest groups (namely the insurers) will come breathing down the necks of the Democrats to get changes.  Keep in mind that now the Democrats will be the beneficiaries of PAC money from special interests, especially their committee chairs.

Passing a budget that does not have the spending cuts Trump has wanted is also impossible now.  Expect to see another potential government shutdown and finger-pointing.

Firearms control legislation will be front and center and die in the Senate.  Democrats are all about emotion, not results, when it comes to guns, and other issues.

Forget about funding for the border wall.

Tomorrow, The UGLY (it’s all about the Republican Party’s future in Virginia).

The Good and Bad of the Midterms–Part one was last modified: November 7th, 2018 by Guest Contributor Ken Reid