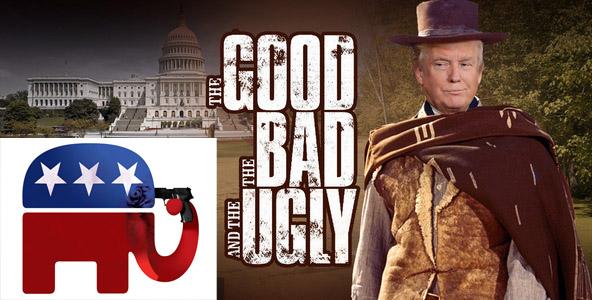 The Good, the Bad and the Ugly of the Midterms (part II)

THE UGLY:  Enough has been said on this blog and all over social media and within GOP circles in Virginia on how badly we lost (again for the third year in a row) in this state.

So, I won’t go on and on about how Corey Stewart was a drag on the ticket, despite not having too bad of a showing against Tim Kaine. See my Part I, the Good and the Bad of the midterms

I won’t belabor how Scott Taylor and Dave Brat, who both lost their seats, should have embraced Trump more, maybe had him in for a rally.

I won’t go on and on about how the Trump was the problem, because he’s the President for two more years, and at this point, likely to be re-elected, unless Adam Schiff and Elijah Cummings find some bombshell that leads Republicans to want to join in impeachment or removing him under the 25th amendment.

I also won’t get into the weeds on how the Republican Party of Virginia (RPV), and a number of local units, are not into winning elections as much as maintaining power and control over the nomination process, and as such are presiding over a dwindling party of mostly older white people.

This means I won’t swipe the Central Committee for passing over a dynamic African American as Chairman, Chuck Smith, in favor of the insider white guy, nor dump on how RPV ejected Fredy Burgos from the SCV for his comments about Jews, instead of trying to work out a compromise.

So, instead, I will reiterate 8 ideas to grow the GOP  that I offered on this great blog after the 2017 drubbing we experienced in the statewide and General Assembly elections (abbreviated).

First, we must recognize that Virginia has changed.  It is no longer a “Southern state,” but a cosmopolitan state that is leaning Blue in statewide and presidential races.  This is due to the growth in Loudoun and Prince William counties, and other outer suburbs, fueled by the influx of Northeasterners coming here for jobs and lower taxes, but not leaving behind their Democratic Party/liberal preferences. It also is due to the growing non-white population  Latinos, Indians and Muslims, who think Republicans don’t want them here due to the rhetoric of our candidates and activists, and deliberately skewed by the liberal media.

Second, Northern Virginia is where the votes are, along with Hampton Roads and the Richmond area – not in the rural conservative areas of the Commonwealth. Democrats love to define us by – i.e. anti-immigrant, anti-woman – but to bread and butter issues that matter to ALL voters – specifically, traffic congestion (transportation), schools, including higher education, and jobs.  This does not mean we forego a conservative social agenda, but give them a REASON to vote for OUR candidates, as I wrote last month.

Third, Trump is Trump and we cannot “change him” and until he goes, we are sunk. The problem with this attitude is that none of us can change Trump…  But his agenda is what we SHOULD embrace. Boosting military spending and investing in infrastructure HELPS VIRGINIA, whose economy and prosperity is heavily dependent on defense dollars.

Fourth, we must let go of the idea that government is BAD.  In a state where 178,000 residents work for the federal government, and is No.  1 in defense spending ($59 billion in 2011, 13 percent of state GDP), how can Republicans NOT support SOME level of government?   What we should want is LIMITED and EFFICIENT government, not cutting programs for the sake ideology.

Fifth, we must take advantage of non-campaign times of the year to “educate” these new voters.  With elections every year in Virginia, this is hard to do, but in the early part of 2018, I would suggest RPV convene focus groups with voters who do not vote GOP and find out why and what WOULD make them vote by showing them a series of issues and topics and see how this resonates.   With that information in hand, next invite select voters (non activists) from the various population groups and precincts we need to target to private town halls where they can meet with GOP officeholders and help them draft an agenda for action in Richmond and the local level.

Sixth, engage “adults” to handle outreach, not kids out of college with no life experience.  A number of party faithful, like me, are mystified how RPV and various campaigns will hire inexperienced young people instead of financing “adult” campaign activists with networks and recognition in their own communities.

Seventh, we need to stop blaming the media, illegals, and felons for our losses, as well as thinking that some strident ideological conservative as our candidate is always going to win…Republicans have to not just win elections, but hearts and minds during non election times.

Eighth, there needs to be more connection between the elected Republicans and party activists so suspicion doesn’t breed disunity.   I find so many GOP activists in this state eager to “primary” someone they just elected thinking they were “tricked.”  Communication is key.

I will add these “inconvenient truths” to my list:

Just a few weeks ago, a staunch Trump conservative, Eric DeKenipp, announced his resignation as the Catoctin District School Board member in Loudoun, due to family reasons.  Four people applied to fill out the balance of his term. Whom did DeKenipp endorse? A Republican-turned-Democrat named Bob Ohneiser, perhaps because the other three candidates are more liberal.

The Loudoun County Republican Committee, on which I have been a member since 2003, has no candidates yet for this seat, nor candidates for key County positions next year.  A phenomenal candidate for Chairman backed out for family reasons. Mind you, the call for the Convention is probably just three months away. But let’s be real, does the state or national party help the units to do this? NO!

If Democrats control redistricting, Virginia will not just become a “Blue” state but a high-tax, big-government state, and we might see an end of “right to work.”

We have seen a number of states in this nation go from Purple to Blue to the collectivist anti-business and high tax model.  This is why Northeasterners are moving here, and have no clue why our taxes and cost of living is lower. It’s due to Republicans keeping it that way!

Republicans can threaten to move to Texas, but that’s not the way to handle it.  It’s best to stay put, reach out to new groups and keep fighting.

So, these are the high stakes we face.  The “Good” was we won the Senate, the “Bad,” we lost the House, and the “Ugly” is we face with Republicanism in Virginia.

The Good, the Bad and the Ugly of the Midterms (part II) was last modified: November 8th, 2018 by Guest Contributor Ken Reid

Advance OR Retreat is the question facing Republicans in Virginia – The Bull Elephant December 14, 2018 at 1:07 pm