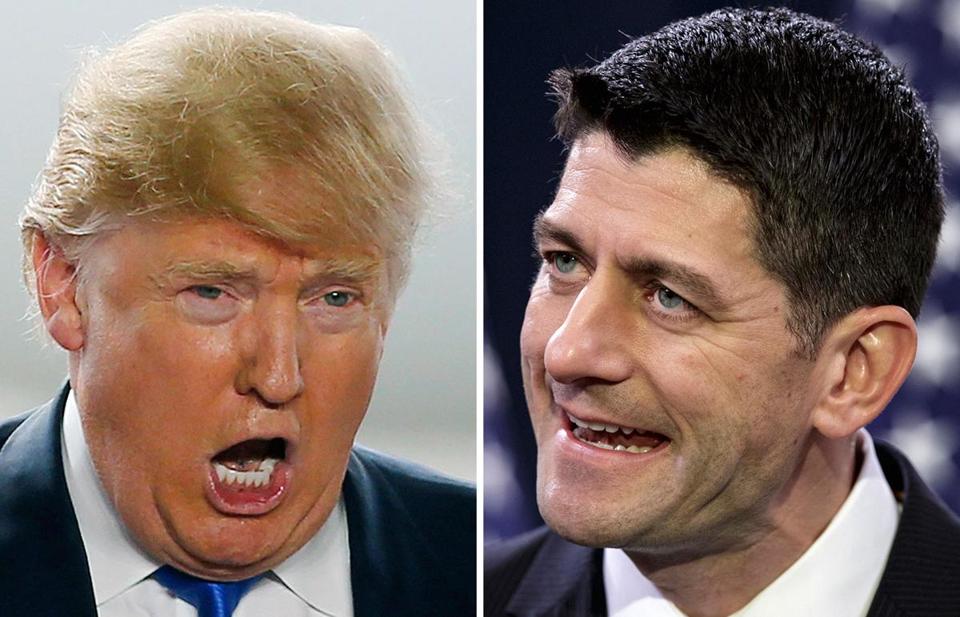 The GOP’s Most Dangerous Man?

No, it is not Donald J. Trump.

For all the hysteria over The Donald in certain quarters, he won the presidential nomination the old fashioned way; he earned it by talking to the American people about what is going haywire in their country.

He farmed his political harvest right in the center of the concerns of not only Republicans and conservatives, but of many working class Americans. He speaks their lingo on issue after issue, and he spits in the eye of political correctness.

Mr. Trump may be overly exuberant, even outlandish and then some at times. He may make some folks cringe, and he may infuriate the snowflake generation. But his â€œAmerica Firstâ€ campaign is within a whisker of Hillary Clinton in the polls and there is little doubt that he will be like a Doberman Pinscher with a new shoe in the fall campaign; he bites and he wonâ€™t let go.

Instead, the long-term danger to Republicans and conservative movement is the entrenched, corrupt Congress and their army of lobbyists and corporatists who have spent the last few decades telling the grassroots one thing to get elected, while doing exactly the opposite in office.

Officially the party is now largely a gaggle of globalists and internationalists, whose mindset is trans-national, not national, and who see no danger at all in America becoming submerged as merely one more nation among many.

There is no more radical and dangerous proponent of the internationalist world view than Paul Ryan. Over the past year, I have written numerous unflattering articles on Speaker Ryan, the essential summary of which is that the Speaker is a zealot â€“ an extremist advocate for the â€œany willing workerâ€ concept that proposes that the world labor market should be a free for all; any laborer in any profession should be free to come and go at a willing price anywhere, anytime. (Of course, as with all such agreements, only the U.S. ends up honoring any deal as written.)

Speaker Ryan is also the most passionate promoter of the so-called free trade agreements, especially the new Trans Pacific Partnership, a monster 3,000+ page treaty that we are officially pretending isnâ€™t a treaty, written by lawyers and international bureaucrats, and of which only about 10% of the text even deals with trade.

TPP poses an impending threat not only to working class Americanâ€™s and their families, and independent businesses, but on the Constitutional order of the nation itself.

The remaining 90% of the TPP cedes incredible control of the nationâ€™s affairs and its future way of life over to international tribunals, many members of which will come from countries run by thinly disguised despots and international thugs.

To put it plainly; the Constitution and the TPP cannot co-exist. One must recede in power and the other must gain that power.

The Bill of Rights, and the foundational control of the nationâ€™s borders and its ability to adjust and accommodate the economy and the culture to any circumstances would be greatly reduced. Consumer advocacy and protections, environmental control, the labor force, immigration, and the ability to redress grievances would all be directly impacted by the TPP.

Ironically the Speaker is all fired up on A Better Way, a policy collection of Republican answers and proposals to some of the nationâ€™s most vexing social and economic issues. The first policy paper was released with a thud recently and is a blueprint to what the nation should do to fight poverty.

It is almost satirical because this is the man who wants to increase all immigration dramatically, including seasonal and professional work visas for potentially unlimited immigrants from all over the world (many of whom will stay forever once here, if past history is a guide); he supports importing even more Muslim refugees even though we canâ€™t even properly document or assimilate those who are already here; and he is for wide open borders and amnesty. All against the backdrop of middle income wages falling dramatically, total middle income employment dropping, and depression era level unemployment and underemployment â€“ especially in the poorest of Americaâ€™s towns and cities.

So, the question is, how can we reform welfare and break the cycle of government dependency while at the same time importing low skilled, low wage workers, encouraging illegal immigration and allowing â€œanchor babies,â€ and fundamentally stripping wealth from the diminishing middle class?

The answer, of course, is in the question.

On August 9th, Mr. Ryan will face a primary challenge from a feisty businessman in Wisconsinâ€™s 1st District, Paul Nehlen. The motorcycle riding executive is aggressively pointing out to the voters that the Speakers words back home, donâ€™t match his actions in Washington. Â Whether or not Mr. Nehlen can win against the entrenched Speaker, his corporatist crony friends, and his wifeâ€™s family fortune is another issue â€“ but Mr. Nehlen is showing the way in how to attack the other internationalist dead-weights in Congress.

The rest of the country has plenty of members in Congress who side with Speaker Ryan while they go home and pretend to be actual conservatives. Unfortunately, not many have such an aggressive primary opponent as Mr. Ryan.

In Northern Virginia, as an example, first term Congresswoman Barbara Comstock (R-VA, 10) talked up the conservative game and credentials while campaigning for office; and now continually ranks lower than some Democrats on various scorecards (CR rating F). Like Speaker Ryan, with whom she is close, she votes the internationalist, globalist line, beholden to no one except the Chamber of Commerce and transnational corporations. Also following the lead of Mr. Ryan and others, she can hardly hide her disdain for Mr. Trump.

Reasonable people can disagree on what Mr. Trump can or will be able to do if elected President. But we already know who the most dangerous member of the GOP is; and it ainâ€™t Donald J. Trump.

The GOP’s Most Dangerous Man? was last modified: July 21st, 2016 by Michael Giere

[…] one bright spot in all of this is that the Speaker is being challenged in his Wisconsin Congressional District by a feisty business executive, Paul […]

Globalism is another word for collectivist tyranny. The left keeps changing the words and even creating new ones but in the end all are enslavement. Try asking a globalist what type of government he or she favors in the new world order. Essential liberty isn’t even a consideration.

You say Trump is a liberal… Let’s put aside Ryan’s love of open borders for a second… You guys defend his last budget deal with Obama.
So gimme some Ryan is a liberal… NEVERRYAN please!

Now let’s get to the open borders. For emphasis…. YOU ARE NOT A CONSERVATIVE IF YOU SUPPORT OPEN BORDERS!

Do any of you get that?

Nevers are never consistent. This is yet another reason why they are being excised.

Soon Ryan, et al will get the message.

Yes he is, his primary is in two weeks.

Who has Dave Brat endorsed? Nehlen or Ryan?

Brat tucks tail and hides. He has a book out now, first sign of turning, “in my book”.

Why should he endorse either, he doesn’t live there?

How well does it go over in the household when we do or don’t ‘endorse’ our sister-in-law’s current ‘boyfriend?’

I’ve come to the point were political endorsements today are largely worthless coin in my opinion unless they come from the actual base constituents an individual has served or represented in the past and has established a proven record among. Not trying to push my belief on others but truth telling has become so debased in our politics that they just don’t mean much to me anymore no matter what wing of the party they originate from.

Amen to that! I’d only take a Lawrence Wood to the bank now.

At one point in time, prior to his assuming the House Speaker role, I was of the opinion that Ryan was at least honest in communicating his misplaced and dangerous convictions on globalist trade issues and the often accompanying regulatory overlay of national sovereignty. But with his increasingly serious contested primary challenge by Paul Nehlen he now claims that was never the case and has tossed these positions aside (at least for this re-election primary cycle) and now is claiming in his media campaigns that he doesn’t really support open border importation of lower paid workers to replace Americans and never would support the global outsourcing of American manufacturing capabilities to foreign lands not always on the best of political terms with United States international perspectives or policies.

It’s all simply a big misunderstanding of his complex, nuanced policies by those of us just too unsophisticated to grasp the big picture. In others words he is both dangerous to our national sovereignty and an outrageous liar to boot. Equally surprising to me is the frantic efforts by local regional Gov. Scott Walker to prop him up politically by repeating these gross misrepresentations. It is not outside the realm of possibilities that he could actually lose his primary quest, although he isn’t quite as disconnected from his base, as someone he frequently reminds me of – Eric Cantor. Just as it occurred with Reagan the political shakeout may be beginning. We will see but regardless the big lie will not likely save your job when your positions have been so long held and so completely documented.

Well said as usual Lawrence. Your posts are the best thing on this website.

I think another rather insidious side to the Establishment GOP types like Ryan, is that they are completely lying about the most fundamental thing that should be precious to a real conservative… Limited Government.

Do you think that guys like Ryan, doing the bidding for shadowy corporate types and billionaires, give a rat’s bottom about limited government? Do you make yourself a mutl millionaire in your days in Congress by passing laws limiting government… especially in the budget area? You saw that little POS true colors with that budget deal… And now he is presiding over yet another incline in US debt as Speaker…

They are lying to you rubes, like you say Trump is doing… but guys… Trump hasn’t held office… the GOP Establishment has been lying to you for decades..

What kind of Conservative could support or facilitate TPP???

The establishment, of course.

You all got to meet the real Cruz last night. What is wrong? Cat got your tongue? All those word processors broken?

I told you so.

Yes, Cruz was fantastic last night. So proud of him.

Do you suppose Goldman Sachs feels the same as you?

Why would I care what they think? What a silly question.

No, they are blind to Cruz’s obvious globalist ties. He was fully supportive of TPP, even wrote an op ed with Speaker Ryan in the WSJ. How thry can claim he is a constitutional conservative and a tea party guy while supporting 3,000 plus page bills that sell out American workers is beyond me. I can only assume they are benefiting from it so their feigned outrage over Trump’s so called lack of principles is just an act.