Senator Dick Black asked that The Bull Elephant be the first to publish his latest op-ed and call to action, “I am calling on all law-abiding gun owners to stand up for your rights and contact your representatives today to stop the erosion of our rights and freedoms given to us by the Founding Fathers. They fought to grant us these rights and now we need to fight to keep them.”[read_more] 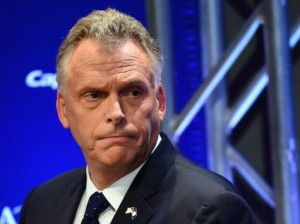 Gun control is high on Governor Terry McAuliffe’s agenda. This Monday, he announced a broad package of bills designed to restrict the gun rights of law-abiding Virginians. His first anti-gun action took place last session, and he has plans to continue his agenda in the 2015 session. On March 19, 2014, the Governor signaled his determination to crack down on gun rights. His first veto was a minor bill clarifying the right to carry guns in unlocked glove compartments. Though it simply clarified existing law, the Governor still vetoed the bill. This was just the first attack Governor McAuliffe had planned.

LEGISLATION COMING TO RESTRICT LAW-ABIDING GUN OWNERS: McAuliffe heavily courted billionaire New York Mayor Michael Bloomberg during his campaign for Governor. In return for his promise to wage a campaign against law-abiding gun owners, Bloomberg dumped over a million dollars into the race.

Governor McAuliffe never hid his disdain for gun rights. The Politico reported that “McAuliffe is unapologetic about his support for stricter gun laws, including an assault weapons ban, universal background checks, limiting the size of magazines and preventing people from buying more than one gun a month.” It went on to say that “He would unquestionably be a close Bloomberg ally should he win.”

Republicans won’t let liberal New York billionaires run our state and we will fight for our freedoms.

Governor McAuliffe’s Democrats have introduced bills to honor their commitment to New York Mayor Bloomberg. One bill limits the number of guns Virginians can purchase each month. Republicans have fought this unconstitutional restriction on the 2nd Amendment before and we will do it again. We argued that if government can limit how often we exercise our 2nd Amendment rights, they could also limit how often we exercise our 1st Amendment rights. Republicans won that argument and repealed the Democrats’ “one-gun-a-month” rule.   We will push back against any bills that seek to erode our freedoms.

NO JOB–NO GUN BILL: Democrats will introduce a bill to deny people’s 2nd Amendment rights if they can’t pay child support. There’s no logical connection between paying child support and owning a gun. The only purpose of the bill is to deny constitutional rights as a form of punishment. That’s a dangerous precedent, and Republicans must block it.

CLINGING TO OUR GUNS AND BIBLES: Democrats want to control people who “cling to their guns and their Bibles.” Some Democrats dislike our Bibles as much as they dislike our guns. Republicans believe that gun controls deprive citizens of fundamental liberties enshrined in the U.S. and Virginia Constitutions. The Bill of Rights belongs to the People, and we must never yield our constitutional rights.

DEMOCRATS WANT US DEFENSELESS: Without guns, citizens are at the mercy of criminals—like the violent looters terrorizing Ferguson residents. The Ferguson mob didn’t just happen; it was carefully planned and lavishly funded by big-government liberals who bused in people to cause chaos. This well-funded, carefully planned power move bused in several hundred out-of town rioters and had to feed and house them for three months in Ferguson, Missouri. Much of these violent protests were funded by wealthy liberals who spent millions to sustain this small army for three months. They want residents to be unprotected, disarmed, and fearful so the people will turn to the government to save them from the violence and the government’s solution is always to take away our freedom in order to protect us from ourselves.

On December 13th, a jihadist took 20 people hostage in Sidney, Australia. The hostages were helpless because Australia prohibits its citizens from owning firearms and they were at the mercy of a gun-wielding radical. This is another grim reminder why Virginians must never allow themselves to be disarmed. We must zealously guard our Right to Keep and Bear Arms.

THE 2015 LEGISLATIVE SESSION WILL SET THE TONE for the remainder of Governor McAuliffe’s term in office. I am calling on all law-abiding gun owners to stand up for your rights and contact your representatives today to stop the erosion of our rights and freedoms given to us by the Founding Fathers. They fought to grant us these rights and now we need to fight to keep them.

[NOTE: In 2003, Senator Black sponsored the Virginia Firearms Preemption Act, which rolled back 40 years of anti-gun legislation in a single stroke. He has been endorsed by NRA and VCDL in every race he’s run since 1997. Colonel Black credits a Winchester M-14 rifle for saving his life during a nighttime gun battle in the jungles of Vietnam..]

I do not favor the one gun a month measure. My wife thinks I already have enough guns. Twelve guns a year becomes expensive. And, I would rather get a new Barrett than several lesser firearms.

*any check that is done using the form 4473 is more than a background check, as it records the specific model and serial number of the firearm sold. It is a record of the entire transaction, NOT a check only on one’s background.

It’s kind of a waste of time though, since this is going absolutely NOwhere. Along with the expanded Medicaid welfare program.

He’s right. We’ve got to fight back or there is not turning back.

or get your head out of the ground and realize that this is all made up. As long as the NRA is in control, you can have all the guns you want, sell them to anyone you want (even criminals and crazies), and never have to accept responsibility for the results of your actions.

Never have to accept the responsibility for the results of your actions? It’s not law-abiding citizens causing those problems. It’s criminals. It’s good guys with guns that stop bad guys from killing innocents. Your pseudonym alone tells me what side of the law you’re on.

Selling or giving guns to bad guys is not OK but its legal because the NRA makes it so. Are you OK with criminals and crazies being able to buy what they like openly?

The 2nd Amendment makes it so.

Just as the 1st Amendment (and TBE) allows you to speak/post here.

Do you really think criminals and crazies A) respect and obey laws and B) won’t make/buy what they will openly/secretly?

Exactly my point. You are crying wolf over something that cannot happen according to the constitution, so stop trying to drum up fear.
Also, take responsibility for your actions. Why does the radical right think it is OK to bully, pollute, interfere in personal lives but never admit to the consequences of these acts.

The VAST majority of non-domestic murders, and other street crimes are committed by the “base” (blacks and Mexicans) of the party you vote for.

Get your head out of your ass and realize that the bad guys will never give up their guns. My action will be to fight this tooth and nail, and I fully accept the responsibility to fight the loony tune liberals’ misguided ideals.

Fight for what and against whom? Right now you can sell any gun you want to anyone even if you know they are criminals and intend to do bad without fear of repercussions. Unlike serving alcohol to a drunk who goes out and kills someone, you have no liability for your actions. Seems to me that the NRA has this issue settled.

The subject of the article above, the infringement upon our second amendment, against fuzzy-thinking leftists such as yourself and your empty-headed rhetoric.

So if I sell my car to someone who uses it to ‘go out and kill someone’ I should be liable?

You are equating the impairment of a drunk to the prescience of criminal intent and action.

And you’re engaging in sophistry in your arguments.

Everyone needs to be held accountable for their actions. If someone is harmed because of something I do, I must accept my part of the situation. Typical GOP response is to ignore the harm and pass the buck.