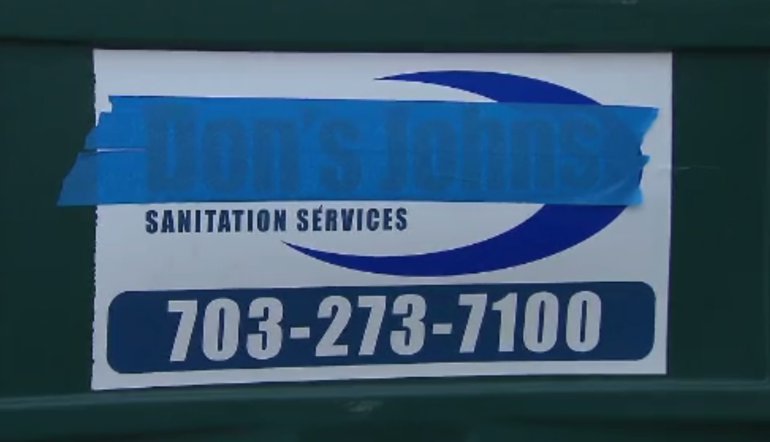 Who is going around the Inaugural grounds covering up the words “Don’s Johns” on the porta potties placed there for the Inauguration? Don’s Johns is the biggest company providing porta potties for major events in the Washington DC area. The company is based in Gainesville, Virginia.

The name is being covered up with blue tape so that it can only be seen when standing right in front of the potty. The company owner, Robert Weghorst, had no idea who was doing it or why until an AP story came out two days ago.

“We don’t know why it’s being done. We didn’t tell someone to do it,” he said in a telephone interview Friday. “We’re proud to have our name on the units.”

Don’s Johns were used for both of Obama’s Inaugurations and the company name was not taped over. So why is it being taped over this time?

Curious that they didn’t feel a need to cover up the company name in the past. This wouldn’t have anything to do with the President Elect’s first name, would it?  Naw, that can’t be it. That would be silly and nothing silly ever happens in Washington.

More on the coverup here.

What was THAT all about? What were women trying to accomplish in their marches? – The Bull Elephant January 22, 2017 at 11:09 pm

[…] Singer Ashley Judd, a master (mistress?) of ceremonies in DC, enjoyed repeatedly grabbing her crotch. Perhaps she too is growing male parts? For women who profess to being strong women they sure do imitate men a lot. Or perhaps she just needed to use one of those disguised Don’s Johns. […]

Is Donald Trumps inauguration crowd going to be bad or the worst in modern American history? He’s only been able to draw a handful of D.C.-area wedding DJs and a handful of county-fair-level musical acts. A growing list of congressional representatives have pledged to boycott the event and a D.C. council member says they’ve only received 200 bus
applications (versus 1,200 for the protest march the very next day.)

But, perhaps the most telling sign this is shaping up to be an embarrassing disaster for Team Trump is the fact that only six days out from the event, Donald himself took to Facebook to record a message begging people to attend by offering free tickets to anyone who wanted to attend.

Watch him here if you can stand it: http://www.dailykos.com/stories/2017/1/16/1621063/-A-desperate-Donald-Trump-records-a-message-on-Facebook-offering-free-Inauguration-tickets

Good thing the privvy owner’s last name wasn’t Trump. Can you imagine the diarrhea attacks then?

Can you imagine what the rest of the world thinks of us as they see this carnival freak show unfold??

Prayer warriors and a wall of meat . . .

Two groups who normally have very little in common have vowed to protect President-elect Donald Trump during his inauguration.

ChristianToday.com reported Sunday that “hundreds of prayer warriors” are traveling to Washington, D.C. this week to form a “prayer shield” around the Republican
president-elect and keep him from harm.

“Like angels from heaven, hundreds of ‘prayer warriors’ have descended on Washington D.C. to undertake a crucial mission: protect U.S. President-elect Donald Trump by building a ‘prayer shield’ around him ahead of his Jan. 20 inauguration,” the website said.

“We’re actually a prayer group. We pray for leaders across our nation — a group of pastors come together to pray for our nation and our leaders, particularly the new administration,” Majette said.

Should such celestial interventions fail, however, Fox and Friends said Sunday morning that a group called “Bikers for Trump” are also traveling to the nation’s capital to act as roaming peacekeepers.

The group’s founder Chris Cox told Fox News, “We’re a force to be dealt with, we’re a political phenomenon,” but insisted they’re not a vigilante organization.

“In the event that we are needed, we certainly will form a wall of meat,” said Cox.

“What does that mean, ‘a wall of meat?’” the Fox and Friends hosts asked.

“We’ll be shoulder-to-shoulder with our brothers and toe-to-toe with anyone that is going to break through any police barriers, that’s going to be assaulting women, spitting on them, throwing things at them.”

Avoiding the appearance of evil is a long-standing policy among people of integrity. Apparently, no person of integrity has been in charge of the office of the Architect for many years. I hope the Lefties choke on their bowl of sour grapes.

So — you are telling us that a new Architect of the Capitol is changing things?

Perhaps you’d do well to check your facts first.

A US counterintelligence task force was established by the CIA in 2016 to investigate possible Russian funding of President-elect Donald Trump’s presidential campaign, the BBC reported on Friday.

The task force included the FBI, the Treasury and Justice Departments, the CIA, the Office of the Director of National Intelligence, and the National Security Agency (NSA).

It was set up after the director of the CIA, John Brennan, received a recording of a conversation about money from the Kremlin going into Trump’s campaign coffers, the BBC’s Paul Wood reported. The recording was apparently passed to the CIA by the intelligence agency of one of the Baltic States.

On October 15, the task force was granted a warrant by a judge in the FISA court — named after the Foreign Intelligence Surveillance Act — to intercept the electronic records from two Russian banks that may have been implicated in the money transfer, a senior intelligence official told the BBC. Trump was not named in the warrant, but three of his associates were the subject of the inquiry.

Once again, this has nothing to do with the post. PLEASE try to stay on topic.

The topic is the urinauguration.

you can demean JM’s golden boy or she will start deleting your comments. Only pro-trump posting accepted here

Trump is my golden boy?! Since when? He was never my choice but he will be President in 5 days and I’ve been very impressed with cabinet choices?

At least try to take your meds!

It would appear his meds are not legal.