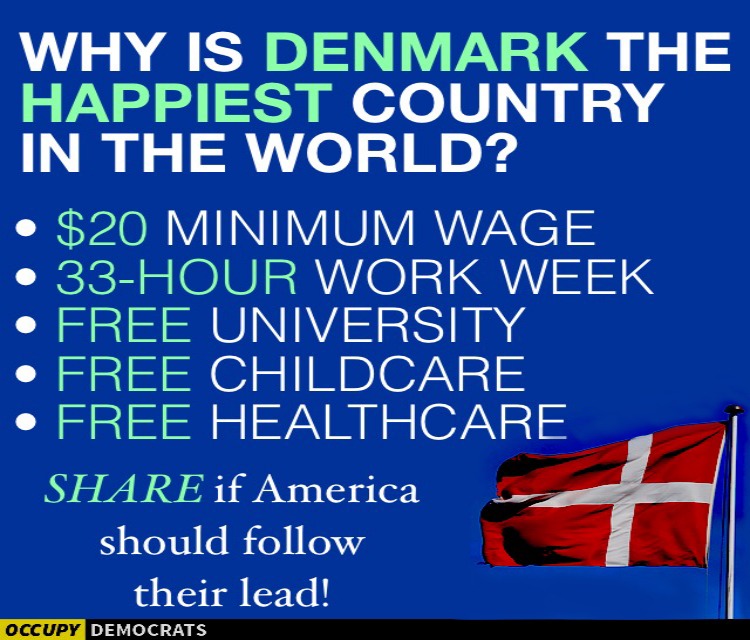 Are memes like this partly responsible for the rise of Democratic socialism in the U.S.?

The Great War and Modern Propaganda

On occasion of the centennial of the Armistice that ended World War I – Nov. 11, 1918 —  I am thinking a lot about “fake news” and “memes,” as propaganda and propaganda posters were critical in the “War to End All Wars” – a conflict that wound up killing and injuring some 40 million people.

As a rule, I do not post “memes” on my Facebook page, unless they are funny.  I believe they have bad consequences for our society.

Above you will see a meme from the group Occupy Democrats, which touts how great it would be if the U.S were more like Denmark, with its generous social welfare state.  In other words, “democratic socialism.”

So, whenever I see the pro-Scandinavian meme – or some liberal defense of socialism – I keep Edsall’s column bookmarked and ready to respond back with the link. Yes, I have liberal friends on Facebook (though a number of snowflakes have unfriended me since the 2016 election).

However, despite Edsall’s column, and a bevy of material one can find to document how the U.S. cannot become Sweden, the Democrat far Left is infatuated with socialism. The shocker came this summer when a Gallup Poll showed, 60 percent of Democrats actually had a favorable view of socialism.  And, this fall, a number of Democratic Socialists like Bernie Sanders were elected to Congress, notably, the very young and naïve  Alexandria Ocasio-Cortez of New York.

To be sure, the Leftist tilt of our universities, public schools and media and Hollywood are largely to blame for the socialist takeover of the Democratic Party.

However, I have been thinking long and hard how social media and memes have helped perpetrate this myth and the Democrat’s sharp move to the far Left.  And, in many respects, memes have worked to blind a number of conservatives about our failings. As such, they are another cause of the great divide in this nation.

According to Wikipedia, World War I saw “Atrocity propaganda”  — a form of advertising to justify the war and each side’s efforts. “…As in any war -the truth suffered. Propaganda ensured that the people only got to know what their governments wanted them to know. In World War One, the lengths to which governments would go to in an effort to blacken the enemy’s name reached a new level.”

In addition, press censorship and government propaganda suppressed “the grim horrors of war [and] alienated the soldier from civilians,” according to a review of the late Rutgers professor Paul Fussell’s landmark book “The Great War and Modern Memory”

Note the line: “The truth suffered.” But in the end, it was Planet Earth that suffered the most.  Besides the 40 million casualties, four major empires fell and communism germinated in Russia. The maps drawn at the Treaty of Versailles in 1919 only temporarily brought peace until imperial aims of Germany, Japan and Italy brought out World War II, the Holocaust and even more death and destruction. 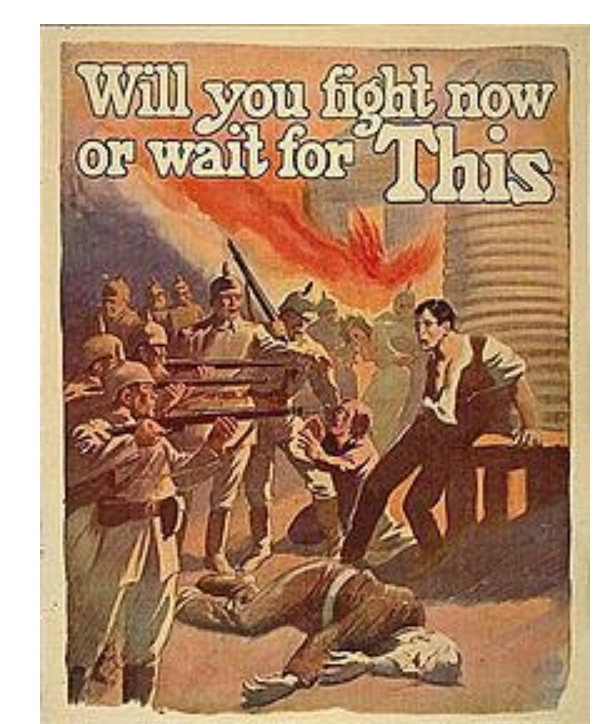 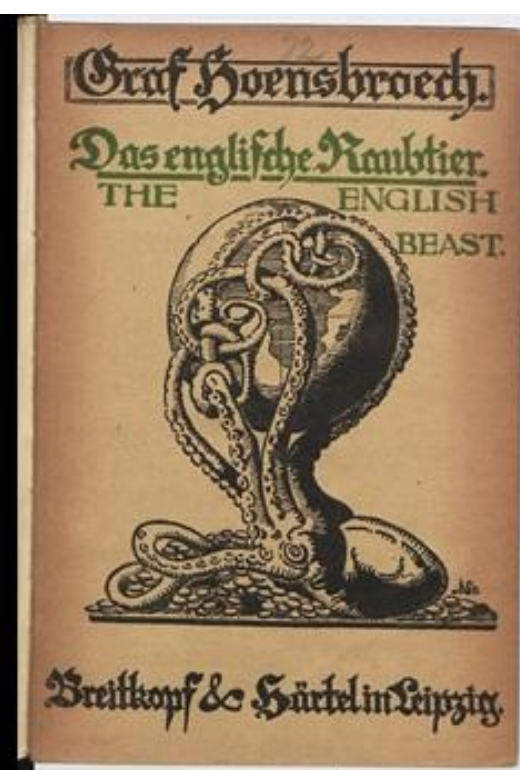 The English Beast, a propagandist pamphlet produced shortly after the war in Germany. The image shows England as a monstrous giant squid, lying on a bed of money and choking the globe with its twisting tentacles.

In other words, propaganda can lead to serious consequences.

Today, the United States is divided politically, not by trenches,   and the major problem confronting our democracy is that liberals and conservatives go at each other often without knowing the full facts.

The three cable networks and various blogs and media outlets like the Huffington Post and Breitbart put out biased news to suit the views of their audiences, and for profit.  So, “fake news” is for real – but it’s on the Right, as well as the Left.

Memes are a propaganda tool designed to take complex issues and turn it into a visual graphic that’s easy to read and which pushes our hot buttons.  It’s like a TV commercial without the sound.

Today, the average news consumer needs a B.S. detector whenever they read an article, Facebook post or watch a spot on TV.  One has to be quick with Googling facts before posting, it would seem. You post something based on emotion, or “share” something that strikes you, be prepared that you have been conned. Memes make it so easy to share propaganda and perpetuate myths and lies.

I believe conservatives, who tout “fact over feeling,” are better than this.  We should stand tall for fact and universal truth, particularly in the face of the romanticism and excessive idealism of our opponents.

While it’s convenient and easy to repost and “share” news from Breitbart, The Daily Caller or any number of conservative news outlets, it’s far better for us to post articles like that from the NY Times (above) or the Wall Street Journal, Financial Times or the Economist.

Even posting something from The Weekly Standard or National Review is preferred to Breitbart.

In addition, we should not cancel our subscriptions to liberal newspapers out of resentment.   The loss of your business will not change their coverage one bit. But if you don’t feel like paying the Post, Times or Virginian Pilot for a subscription, watch MSDNC and CNN for free — primarily to hear what the other side is saying.

Finally , stop posting memes unless they are humorous in nature.  Don’t fall into purveying propaganda. It’s destructive to our democracy and we saw how it was abused in the Great War, in which millions died.