Latest Posts
Thanksgiving COVID restrictions show how people will avoid...
6th Congressional District leading the way when it...
Give Thanks with a Grateful Heart
Advanced Aptitude Testing
Tears and laughter at Thanksgiving
Race, COVID and the Washington Post
Joe Biden has no path to victory 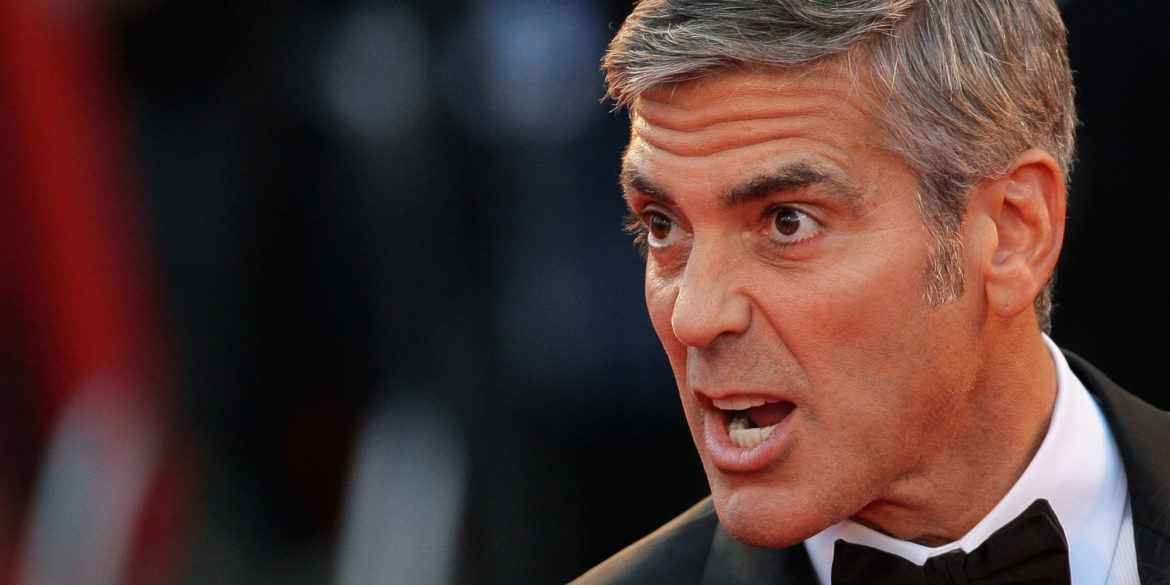 The Green-Eyed Monster Gets to George Clooney

Jealousy is an ugly trait even in someone as beautiful as George Clooney. The legendary liberal and foul-mouthed Clooney took to Twitter over the weekend in, as far as I can tell, an unprovoked attack on Steve Bannon calling him a “F###ing Failed Screen Writer.” It seems that before Bannon went into politics he tried his hand at writing a Hollywood script, and failed. Wow, how embarrassing.

But why drop the F bomb on someone?

Well, you may say that Clooney is just an angry liberal who has still not gotten over Hillary losing the Presidency. That could be true, but I think there is more to it. I think Clooney is jealous that Bannon accomplished something far greater than anything Clooney has up to now. That is Bannon was instrumental in getting a President elected. Only 45, up to now men, have been elected to that office. So being involved in a winning Presidential campaign at a high level is a real feather in anyone’s cap. If you don’t believe me just ask Bob Shrum.

And isn’t that a far greater achievement than writing a Hollywood script? Or having a minor part in the 80’s sitcom “The Facts of Life”? Although, if I had a chance I would ask Clooney what it was like to work with Kim Fields. For those of you that don’t remember she played the effervescent ‘Tootie’ on the show.

Clooney is an unabashed liberal that is for sure, but he is also one of the dimmest in the constellation of Hollywood stars. A reflexive liberal with the most facile of arguments at the ready. Arguments that if forced to define or defend he couldn’t.

An example, last spring he complained that an “obscene amount” of money is being spent in politics. How does he define an obscene amount? He doesn’t. The interview I witnessed was nothing more than a liberal NBC reporter asking him softballs and nodding as Clooney spoke. No real follow up was involved.

How much money is the right amount, either in terms of a dollar figure or possibly what percentage of say the GDP, should be spent on campaigns for President?  Clooney doesn’t offer a formula to allow us to ascertain how much should be spent.

Perhaps he has adopted the Potter Stewart definition of obscenity. Stewart was a supreme court justice who said I can’t define obscenity but “I know what it is when I see it.”

The New York Yankees payroll in 2017 is estimated to be over 154 million dollars. Does George think that is an obscene amount of money to pay men to play a child’s game?

Perhaps Clooney believes that too much money in politics corrupts the system because candidates with more money have an unfair advantage.

Happily Hillary debunked that theory. Through fundraisers like Clooney’s, she tried to buy the Presidency. According to Reuters Hillary Clinton raised over $520 million for her campaign compared to only $270 million for Trump, much of which came out of his own pocket. And if you consider SuperPacs and outside groups her money advantage was even greater. And if you consider the free media she received from the adoring Washington press corps her money advantage would be something like 10 to 1.

My theory is that Clooney made the obscenity comment because he assumed that Trump would outspend Clinton. At some point he realized she had more money so he dropped the complaint.

The good news, it didn’t work. Money can only get you so far in politics. All the money in the world couldn’t get Hillary elected.

George, money in politics is not obscene, but dropping the F bomb on someone you don’t know is.