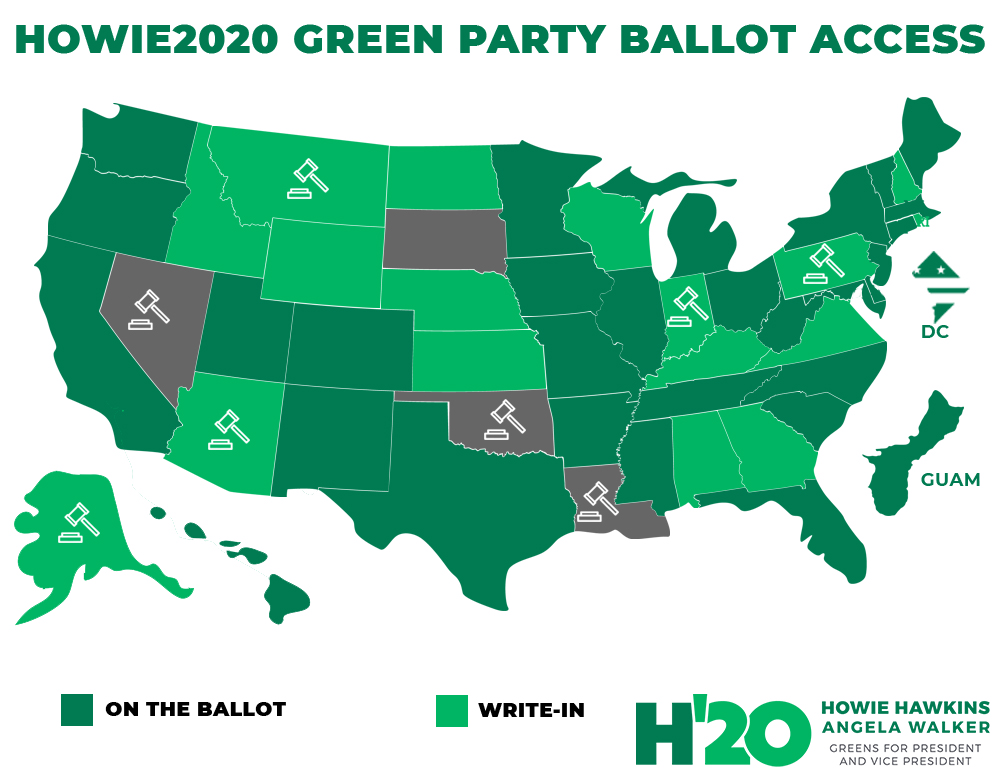 The fact the Green Party candidate is only on the ballot in 29 states this year vs. 43 in 2016 could be a factor in whether Donald Trump wins re-election or not.

At the start of the 2020 presidential race, I had hoped for Joe Biden winning the  Democratic Party nomination over socialist Bernie Sanders, which went against conventional wisdom at the time.

My reasoning was that Biden being more centrist would turn off the radical Left of the party, who would flock to the Green Party candidate â€“ assuming the Leftist Greens would nominate a strong candidate.

Then, COVID came along and Sanders backed out of the race and endorsed Biden.  Democrats united against Trump and embraced the leftist socialist platform, and the Green Party nominated an unknown, Howie Hawkins, who has garnered no national media coverage and has limited ballot access.

In 2016, Green Party presidential candidate Jill Stein garnered some 1.4 million votes nationwide, and Libertarian Gary Johnson got 4.5 million. Stein,  was on the ballot in 43 states  and she had the highest vote total for a Green candidate since Ralph Nader, the partyâ€™s founder, in 2000 (when he got 2.7% of the national vote in the race between Democrat Al Gore and Republican George W. Bush).

Stein and Johnson were on the news a lot in 2016, getting a lot of free media, or â€œearned mediaâ€ as I termed it in my book on winning and serving in local elected office.

This year  however,  Hawkins, is only on the ballot in 29 states plus the District of Columbia, and the Greens acknowledge on their web site: Due to the COVID-19 outbreak and restrictions on social interaction, collecting ballot access petition signatures will be almost impossible.

Furthermore, in key swing states where Biden and Trump are competing for electoral votes, Hawkins is only on the ballot in Florida, Ohio, North Carolina, Michigan, Minnesota and Arizona.  He is not on the ballot in Arizona, Nevada, New Hampshire and Wisconsin.

But after the 2016 election, the leftist web site Vox cited political scientists, Kyle Kopko from Elizabethtown College, and Christopher Devine with the University of Dayton,  who believe Jill Stein may very well have delivered the 2016 election to Donald Trump, but it was primarily Trumpâ€™s strong message to â€œForgotten Americansâ€ and Hillary Clintonâ€™s corruption and unlikability.

â€œIn Michigan, Wisconsin and Pennsylvania, one could plausibly blame third parties for the outcome. In Michigan, Clinton lost by less than a percentage point, a deficit she could have recovered from with half of Steinâ€™s votes. Again in Wisconsin and Pennsylvania, where Clinton lost by one point, Jill Steinâ€™s votes would have covered her loss. Had Clinton won all three states, she would have won the election.

â€œ â€¦According to Kopko and Devineâ€™s analysis, if Clinton were given all of Stein and Johnsonâ€™s votes, Trump still would have won Iowa, Ohio, Georgia, and North Carolina. But Clinton would have won Florida, Pennsylvania, Wisconsin, and Michigan â€” enough to win her the election. Kopko and Devineâ€™s analysis was completed before all votes were counted.

â€œThe final totals revealed that, in fact, Steinâ€™s total voters exceeded Clintonâ€™s margin of victory. In other words, if every Stein voter had voted for Clinton instead, she could have won Pennsylvania, Michigan, Wisconsin and the presidency.â€

Historically, Stein did phenomenal for a Green candidate â€“ much better than her 469,000 votes as the partyâ€™s presidential candidate in 2012.

Rapper Kanye West, who at one time endorsed Trump, is considered a spoiler candidate to help the president, but is on the ballot in just 12 states â€“ and only one pivotal state, Minnesota â€“ according toÂ  Ballotpedia.Â

Libertarian Party Presidential candidate Jo Jorgenson is on the ballot in all 50 states and D.C., according to her web site.   However, she has failed to garner much national media attention as did Johnson in 2016.

In addition, the general consensus of political scientists and pundits is that Libertarian candidates generally draw votes from GOP and Democratic presidential contenders equally, at least in 2016

I remain hopeful Trump will win, the GOP will keep the Senate, and am working for the GOP ticket.

However, I am not making predictions.  Because I believed those polls in 2016 and was seeing a lot of anti-Trump blowback on the ground, I actually thought Hillary was going to win it.