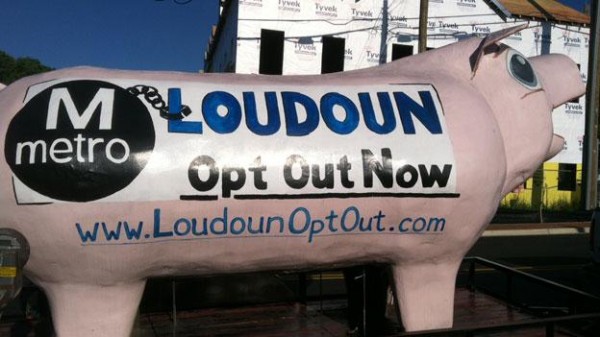 The hits just keep on coming for Loudoun County

On Tuesday the Washington Post reported that the Silver Line, or as we like to call it the Choo Choo to Loudoun, will be delayed by 1 full year, at a cost of an additional 95 million dollars.

Let that sink in for a minute, 95 million dollars!

By the way that is today’s estimated cost. Like all other preliminary estimates on overruns, you can fully expect this number to grow by 40% or more, as has happened with every Metro financial projection.

So the key questions to ask our elected officials, especially Matt Letourneau and Phyllis Randall are as follows:

How much of these cost overruns are to be paid for by Loudoun taxpayers?

Where the hell is that money to come from?

Chairwoman of the Board of Supervisors Phyllis Randall at her most recent State of the County address was all in with METRO to Loudoun depicting flowers, blue skies, and economic development as far as the eye could see. This rosy picture is divorced from the facts and despite all the news and evidence to the contrary is singing the praises of this disastrous idea. Letourneau, on the other hand, is still hiding under his desk mumbling about economic development. Both of these elected officials are clueless as what to do in preparation of this financial debacle called Metro to Loudoun County.

While METRO to Loudoun is developing into the largest blunder in County History,  this pair is focused on a 62% pay raise for the next board, which will be voted on tonight, July 20th.

The root cause of all this Silver Line related BS is the undue influence of real estate developers in Loudoun and Fairfax counties.

They lobbied for the Silver Line to be extended past Dulles into Loudoun, all so they can build 25k+ high density housing units. They’re the ones that sold that “walkable downtown area” nonsense to Fairfax County that resulted in FOUR (comically useless) stops in Tysons. And they’re the ones that are currently density-packing the crap out of the area surrounding the Reston stations.

The people that already live in these areas get almost no benefit from all of this additional development. But they’ll be the ones stuck with the bill for the extra schools and infrastructure. Not to mention the chronically-increasing traffic problems.

That’s not to let local gov’t off the hook, none of this is possible without their collusion.

BING! BING! BING! We have a winner. You sir are entirely correct! Developers and the Chamber of Commerce pushed for metro.

Loudoun is starting to be more and more like Washington DC.

That is true but not exactly music to our ears! As we say “Don’t Fairfax Loudoun”!