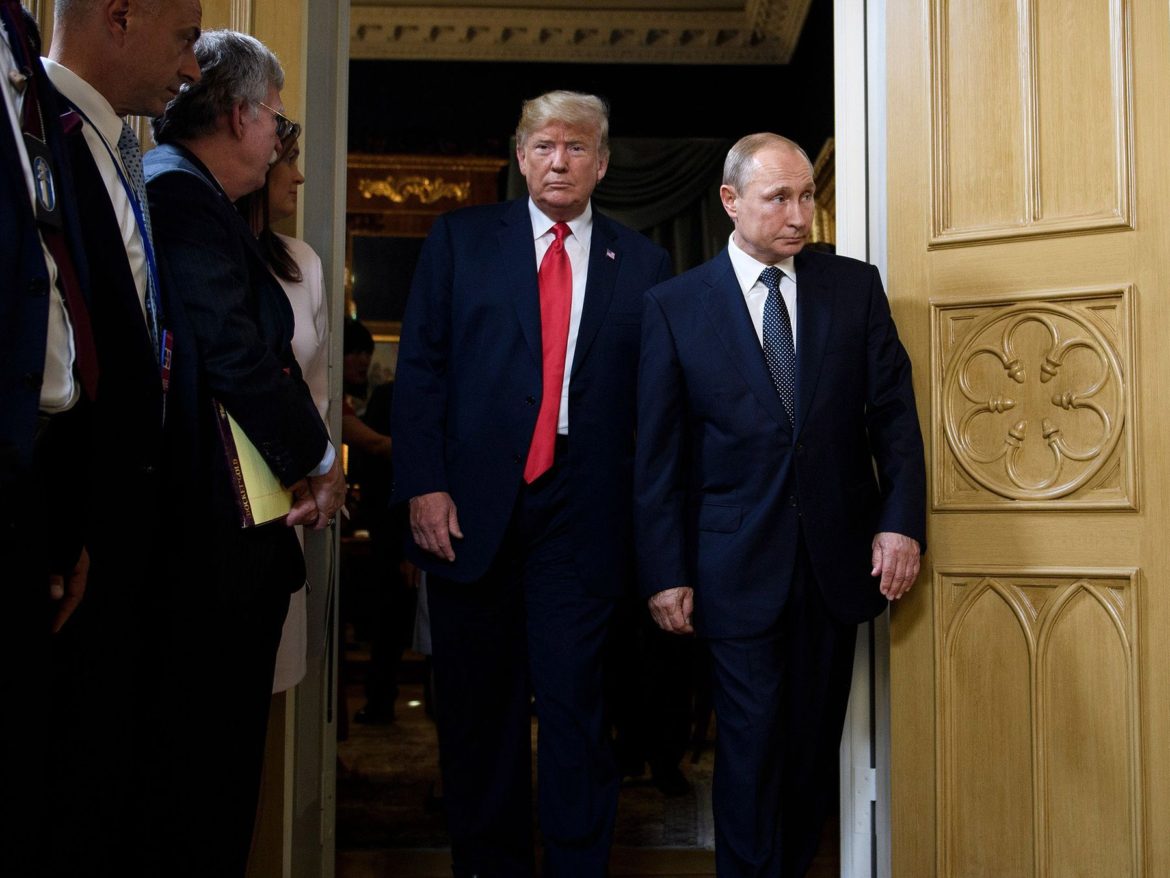 The Holier than Thou Brigade

The negative reactions to President Trump’s meeting with Vlad Putin have an utterly hysterical and nonsensical tenor to them.  I am not going to repeat them here but what occurs to me is that those “Holier than Thou” brigade members would prefer a nuclear war than give any credit to President Trump for anything.

The attacks on the Trump/Putin meeting started as soon as it was announced, and escalated with each passing day.  The crescendo was reached when the ultimate “Holier than Thou” card was played by Deputy Attorney General Rosenstein.  He filed an indictment against Russian election meddlers the day before the President was to meet with Putin.

After the closed-door meeting, Trump and Putin held a press conference.  Apparently, to satisfy the “Holier than Thou” brigade, Trump was supposed to treat Putin uncivilly even though the avowed purpose of the entire event was to try to calm down the rhetoric and see if there were some areas of agreement.  (Under such circumstances, you don’t curse your opponent or shake your fist in his face, you try to reason with him and hand out some limited measures of praise.)

Don’t get me wrong here.  I spent most of my career in the DoD dealing with the Soviet and then Russian enemy.  The CIA and DIA had, and still have, an agenda that treats Russia as an enemy. Nevertheless, it is a good idea to try to ratchet down a situation where mistakes could lead to much wider conflict and war.  (Better a soccer ball than a nuclear warhead).

By the way, spying, stealing, and other forms of influence are practiced worldwide, and our intelligence apparatus is quite sophisticated in that regard.  During my career, I helped the CIA and DIA. I also ran into Russians trying to play spy games. The NATO countries, Israel and Japan were ever present in trying to ”acquire” American technology information.  Probably the worst of this latter bunch was France who was notorious for stealing and then selling obtained information to the highest bidder. (One of my associates hated the French and refused to meet with them or help them in any way.  He had had some rather negative experiences with them during WW2.)

The “holier than thou” brigade wasn’t overly concerned about the Obama years, and he made more than a few international mistakes with Libya, Syria, ISIS and Iran among the worst.  Yet he was treated rather differentially, something that has not occurred and likely will not occur during a Trump Presidency. His “Make America Great Again” agenda is like a red cape to a bull.  Does the “holier than thou” brigade want to make America less than great? Apparently so.

I am glad that President Trump met with Putin.  His meeting with Kim Jong Un, also widely condemned and ridiculed, has had a number of benefits for America and her Pacific allies.  Maybe the same will occur with Putin. Only time will tell.

Addendum:  There is no comparison between Putin and Stalin.  Putin is a KGB thug whose purpose is to “make Russia great again”.  Stalin, on the other hand, is the second greatest mass murderer in modern history having killed over 50 million Russian and East block subjects during his reign.  Only Mao, who is credited with over 70 million dead Chinese subjects, outranks him for genocidal slaughter.

The Holier than Thou Brigade was last modified: July 17th, 2018 by Dr. Robert Warren

Now the WH confirms that they are considering turning former US ambassadors over to Russia for interrogation. I kid you not…Traitor Trump.

Another spin from the left. There is no deal either way but you will certainly try to concoct one. By the way, the ambassador, not ambassadors, was the Obama ambassador to Russia.

I think the FBI ought to bring this ambassador in for questioning about Russian collusion, but since he is an Obama guy it is hands off time. Strangely, the Special Counsel has little real interest in anything Obama/Clinton.

I said “considering”. That alone should make your jaw drop. But you don’t care about American diplomats being handed over to hostile foreign powers because you are an anti-American Trumpster.

If the FBI wishes to interview him, that is perfectly legit…but it won’t happen because there is nothing to investigate. Just more Trump GOP projection.

Unlike you, I remember when the obama/Clinton folks tried to cover Benghazi by claiming it was all about an anti-muslim film. The poor guy had made a couple minute trailer and ended up back in jail for this trumped up lie. That happened, not your bogus assertion. How about poor Elian Gonzales? Am betting you prefer to ignore that.

“In addition to McFaul, the Russian government also looking to question Putin critic Bill Browder, whose attorney Sergei Magnitzky died under suspicious sanctions while in Russian custody. It also wants to question former congressional aide Kyle Parker, who drafted a series of sanctions known as the Magnitsky Act, which Browder lobbied for.”

Crickets from the Trump GOP. Traitors – every last one.

The OMB projects the deficit to rise by $425 Billion over the next two years – but corporate CEOs are happy with their stock buybacks.

“Worker pay in the second quarter dropped nearly one percent below its first-quarter level, according to the PayScale Index, one measure of worker pay. When accounting for inflation, the drop is even steeper. Year-over-year, rising prices have eaten up still-modest pay gains for many workers, with the result that real wages fell 1.4 percent from the prior year, according to PayScale. The drop was broad, with 80 percent of industries and two-thirds of metro areas affected.”

The Trump GOP is to blame. Plain and simple.

And apparently you think the tax cut didn’t help. We have your data for one quarter at best. Somehow, the predictions for the year are for over 4% growth which will translate into greater pay for workers because of employment competition. The overall trends are positive but that doesn’t mean there won’t be periods of negativity.

By the way, I am happy to take any and all blame you want to pass out as that blame is for more good news.

We are already at full employment and have been for some time. So the question is where’s the money for working Americans?

“Businesses are spending nearly $700 billion on repurchasing their own stock so far this year, according to research from TrimTabs. Corporations set a record in Q2, announcing $433 billion worth of buybacks — nearly doubling the previous record, which was set in Q1.”

We were never at full employment under obama.

“The Federal Reserve considers a base unemployment rate (the U-3 rate) of 5.0 to 5.2 percent as “full employment” in the economy. The recovery has now achieved that level, known technically as the Non-Accelerating Inflation Rate of Unemployment, or NAIRU. Sep 4, 2015”

“Under such circumstances, you don’t curse your opponent or shake your fist in his face…”

How silly you are to support this oaf, Trump.

And yet you gleefully supported the anti-American Obama, the sexual predator Clinton, the goofy Carter, the vicious LBJ and the playboy JFK.

You know, every Republican president going back to Eisenhower has been harassed by the left and its msm cronies. Nixon, Ford, Reagan, Bush 1, Bush 2 and now Trump were all oafs. After a while, your complaint is meaningless, stupid and insulting to anyone with half a brain – which, by the way, is more than enough to tackle a half troll.

The only one on that list who was disloyal to their country and their oath of office was a Republican – now the GOP has delivered us another disloyal president.

Clinton was impeached. Nixon resigned. You need to get your disloyalty arguments straightened out.

Clinton was not convicted and did nothing that was remotely disloyal to the country. Nixon directed a criminal break-in of the DNC HQ then he obstructed justice. He resigned because he was informed that he would be impeached and found guilty.

Disloyal GOP presidents are getting to be a regular thing.

Clinton was impeached and not removed in the senate on a party line vote. Nixon did not direct the breaking, he tried to cover it up. Clinton committed an actual crime – perjury for which he lost his law license.

Only the Trump GOP would think that obstruction of justice is not an “actual crime”.

You have to be charged with a crime. Only someone ignorant of the law and the Constitution would make the statement you have just made.

Not true. One can be guilty of a crime even though he has not been charged. Pretty basic logic – I guess you would find that challenging, though. Alas…

No. Guilt is a legal concept.

“noun
1.
the fact of having committed a specified or implied offense or crime.”

Very disappointed with your effort as of late. Sorry but a person who commits a crime is not always convicted in a court of law (or even indicted). Really very simple.

And only the Clinton Dems would think he didn’t obstruct justice even though he lost his law license for perjury and paid off $750k to Paula Jones.

This is freaking ridiculous. Even Trump thinks so.

Could you be a bit more specific?

It seems President Trump has changed his mind, https://www.bloomberg.com/news/articles/2018-07-17/trump-says-he-accepts-u-s-finding-russia-meddled-in-election

I saw Trump’s comment and his subsequent explanation. He said he misspoke the word “would” for the word “wouldn’t”. I am tired of the requirement that Trump be somehow perfect – and also a press that throws away a lot of good work because of a word???? It is obvious that Trump is hated for winning the presidential election and the left plus a lot of globalist RINOs will attack at every opportunity.

Trying to come to some kind of accommodation with Putin, as was the case with Kim, is a good thing. Just don’t understand this bellicose desire on the part of a lot of American leaders. I am not a fan of death and destruction.