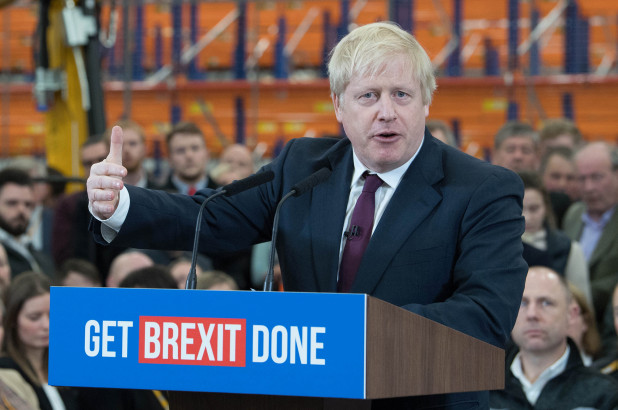 â€œ..the modern individual is an invention determined by language, association, and the workaday realities of living. Nothing more.â€

Itâ€™s astonishing how the transmission belt of history keeps bringing old ideas around, then back around again. It proves the ancient wisdom from the Book of Ecclesiastes: â€œWhat has been will be again, what has been done will be done again; there is nothing new under the sun.â€

Time and again in the back and forth of human history, we see the battle lines are binary; righteousness versus darkness, liberty opposing compulsion, freedom combating oppression, mercy challenging brutality. Always in the drama of how we share life together as societies and nations, mankind wars again and again on the same bloody fields.

The only difference in our era is that history comes at the speed of the electron, so the ebbs and flow of history are squeezed together like a peanut butter and jelly sandwich. Â Â

Boris Johnsonâ€™s smashing victory recently over the Marxist Jeremy Corbyn in the United Kingdom, and what that means for Brexit, polishes another facet in the head-on collision we are witnessing. Itâ€™s a fight that has been steadily growing for decades; working-class citizens are in various stages of revolt against the collectivist forces of radical liberalism run by a self-perpetuating and extraordinarily corrupt â€œruling class.â€

Not only in the U.K. and the United States, but in virtually every Western nation (and now in Hong Kong against the communist leadership in China), there is a raging confrontation between modern â€œpopulism,â€ for want of a better word, and the current socialist states led by the self-proclaimed elite class, who came to influence in the aftermath of the last world war, followed by their offspring.

Whether itâ€™s the professional political class, the protected radical educational establishment, the captains of global, transnational businesses, the wannabe robber barons of the 21st-century tech world, the morally bankrupt news and entertainment complex, or the feeble religious and intellectual classes, the West has been too often led by empty and amoral men and women who share a collective mindset. They view individualism, personal autonomy, and human freedom as problems to be solved in the coming new age, that absolute truth doesnâ€™t exist, and that they alone own the tools to create a utopian, perfect world.

Of course, as demonstrated by the moral chaos the ruling classes have unleashed on the planet, they possess no moral rightness â€“ wisdom – and no inner courage that comes from the conviction of truths beyond themselves.

They are the hollow generations of this era.

As much as Brexit, President Trump and Prime Minister Johnson, and the ongoing political rebellion against the ruling class across Europe and elsewhere, is a welcome rejection, there remain the unrelenting and unending war-games run by the ruling classes and the worldwide socialist movement. Itâ€™s never ceasing, and many of us have cataloged some of the attacks and subversions that the radical left launches.

But to bring about the â€œnew age,â€ the radicals have always needed first to destroy faith, and specifically Christianity and its claims of exclusivity. They have systematically worked to remove religion from the public life and to demean and demote personal faith through the educational establishment and the news and entertainment industry, creating stereotypes and deconstructing the history of the faith and substituting a new pseudo-history. They have infested many of the seminaries, and now are stalking evangelicalism under the guise of the social justice movement.

I was mindful of all of this while I reviewed a large selection of writing recently, by sociologists, psychologists, and such who have been busy this century researching and writing about the concept of – for want of a more manageable description – â€œselfhood.â€ What does it mean to be an autonomous individual with a defined and permanent â€œself?â€ Is there any such thing as a â€œcoreâ€ of ourselves that lasts a lifetime?

The central refrain that at least some of the thinking and ongoing research proposes seems to boil down to this; there may be no core to our self-awareness. What we recognize as self-awareness may merely be an illusion created by the continual building and interaction of relationships that feed us like a stream over a lifetime.

This current trend also seems to diminish or at least re-classify the concept of inner-life and â€œselfhoodâ€ and suggests that the modern individual is an invention determined by language, association, and the workaday realities of living. Nothing more.

Other social scientists, employing this line of investigation, explain that there is no â€œrealâ€ you. Instead, you are only a creation of this social environment; the â€œselfâ€ has died.

Understanding what it means to be a person, to have a â€œcoreâ€ of being, self-awareness, and conscience has been pondered since at least Aristotle thousands of years ago, of course. But, some of the current research and conversation is more accurately a picture window on post-modernist thought that seems to be fashioning a weapon for use in the political wars.

Itâ€™s been re-packaged and piggy-backs on the proto-Marxist writings of the last several centuries and influenced most recently by the late Michael Foucault, a French social scientist, who famously wrote that the â€œidea of man was an invention of recent date,â€ in his 1970 tome, The Order of Things, which presumed to trace the paternity of ideas across time.

All of this renewed speculation on selfhood and how individuals process their roles coincides with the explosive growth of the information age. The transformative power of the microchip has collapsed the space between the self-directed individual and family unit â€“ while allowing governments and businesses the enormous unrestricted power to collect and use detailed personal information to redefine the individual into an algorithm â€“ just a piece of code.

In this sense, technology may diminish or erase the individualâ€™s sense of distinctiveness and self-worth. Hovering like smoke in a busy pool hall, this reduced sense of self fills the room of modern life, but isnâ€™t in itself anything more than a distraction from an ancient truth that fashioned us – we are fearfully and wonderfully created.

If selfhood can be redefined into a strictly communitarian construct, reconfigured, and integrated into the public mind, then the foundations of Western political thought, and the Biblical teaching on who and what a person is, can be destroyed all the faster.

The craft of the totalitarians, socialists, and Marxists has always been the ability to draft disciples into an ideology that rejects an observable worldview and truth; for a mirage, a faÃ§ade of reality conjured up from the worst of manâ€™s depravities.

The irony is that the radicals reject the self-evident reality for a worldview that is enthralled with death while it preaches peace; and can only consume that which already exists by someone else’s mind and brawn, for it builds nothing that it doesnâ€™t take.

With apologies to the sociologists, psychologists and others, the ancient Scriptures define the inner self eloquently and profoundly. We each are marvelously hand-crafted by a Creator, so detailed that He knows the number of â€œhairs on our head.â€ We individually bear His image and have access even to the wisdom of how to live and prosper in this world â€“ using detailed instructions straight from the manufacturer.

Itâ€™s a binary, either, or deal. We’re either accidents of whatever assembled itself out of the primordial goo, and simply the product of the mud of time and the communities that oozed out with us. Or, weâ€™re children of God, each wonderfully made and blessed to bless, to create a “new world” that doesnâ€™t revolve around us, but Him, employing the ageless Truth.