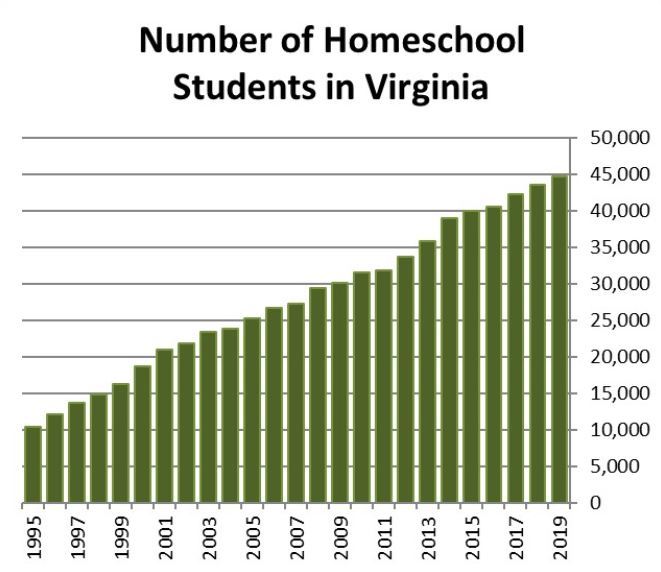 Home schooling has been on the rise in Virginia for many years. The number of homeschooled students reached nearly 45,000 in 2019; if homeschoolers were a school division, they would have comprised the seventh largest of Virginia’s 133 school divisions. Demographer Hamilton Lombard at the Demographics Research Group at the University of Virginia, expects the homeschool trend to continue.

There still are significant barriers to homeschooling, particularly the time commitment required by one or both parents, but other barriers are falling. Even before the COVID-19 epidemic, thousands of parents were making the switch every year, pulling their children out of school and educating them at home. COVID-19 likely will accelerate the trend by increasing acceptance of working at home and introducing many families to virtual learning. Writes Lombard in the StatChat blog:

Prior to the pandemic, Milton Gaither, who studies the history of education at Messiah College, observed that the best way to make sense of the explosive growth in homeschooling is to recognize that it is part of “a larger renegotiation of the accepted boundaries between public and private, personal and institutional.” This can been seen in the growing popularity (even before the pandemic) of other home-based trends, such as working from home, home-based healthcare, and even home birthing.

Certainly, in 2020 most Americans have had to renegotiate the boundaries between their public and private lives as they have adapted to the pandemic. When the pandemic is over, it appears likely that the boundaries between public and private life will not return to past norms. Telecommuting, which was already growing rapidly in Virginia, has been boosted substantially by the pandemic, with many employers planning to continue offering telecommuting as an option in the future.

What long-term effects the pandemic will have on education remain to be seen, but so far, the shift for many to a more technology-reliant and home-based lifestyle has helped create social conditions more conducive to homeschooling. If Milton Gaither is correct, the future growth of telecommuting is likely to occur in synchrony with the growth of homeschooling and other home-based activities.

Parents give many reasons for homeschooling their children. Some want to provide religious or moral instruction the children won’t get in public school. Some have children with cognitive or emotional disabilities that make them unsuitable for classroom learning. One in six, according to a 2016 survey Lombard cites, were dissatisfied with the academic instruction. And a third expressed concern about the school environment, such as safety, drugs, or negative peer pressure.

Bacon’s bottom line: Lombard has identified some of the critical drivers behind the homeschool trend. I would point to at least two others.

One is the growing sophistication of the homeschool movement. Once upon a time, the stereotypical image of a homeschool parent was of a stay-at-home-mother who taught the children herself. As the movement has evolved, parents have formed informal you-help-me-and-I’ll-help-you arrangements and even some formally organized cooperatives. A small industry has arisen around supplying instructional materials the homeschool sector. Meanwhile, the rise of virtual instruction allows homeschoolers to access advanced content and material that their parents may lack the background to provide.

A factor driving homeschooling in the future, I predict, will be the increasing alienation of a many parents from school systems where educational elites have imposed social-justice principles. Discipline and classroom disruption has always been an issue in public schools, which are constrained in their ability to expel children with behavioral problems. But the growing insistence upon (a) mainstreaming children with cognitive or emotional problems and (b) dialing back suspensions and other sanctions for disciplinary infractions on the grounds that minorities are disproportionately impacted will prompt many parents offended by disorderly  classrooms to yank their children. Adding to the disciplinary issue is the oncoming wave of political indoctrination under the guise of “equity and inclusion.” Many parents likely will object to their children being lectured about white fragility and white privilege.

Expect more parents than ever to “vote with their feet” by opting out of the standard educational model of all public schools and most private schools. Increasingly, people are understanding that it makes little sense to march children in lockstep through 12 grades, with a standard of 180 days of schooling a year, regardless of a child’s unique learning styles or pace of learning.