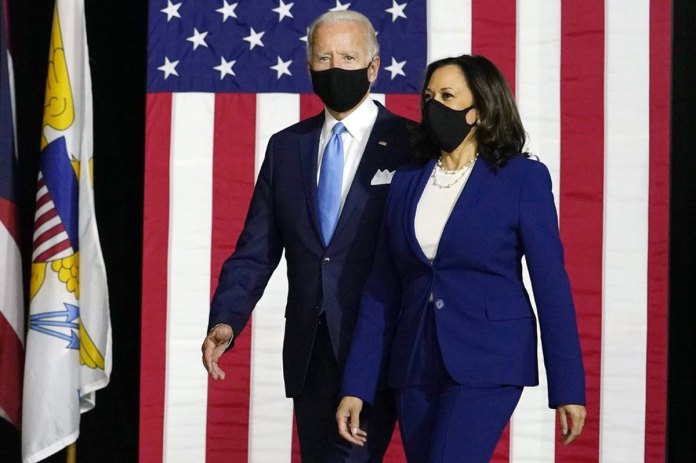 Kamela! Kamela! Oh have you met Kamela? â€“ Kamela the lady of colorâ€¦

(With apologies to Groucho Marx and Lydia, TTL)

As if reading from a script (which they probably are) every Big Media reporter and liberal political pundit has been rapturously referring to Joe Bidenâ€™s vice-presidential pick, Senator Kamela Harris, as a â€œwoman of color.â€ Itâ€™s a historical event. (Certainly a hysterical one.) The country will never be the same. Although, as Yogi Berra (or was it Casey Stengel?) famously observed, â€œThings are more like they are now, than they ever wereâ€¦â€

All seriousness aside, though, what untold numbers of Americans really want to know is â€“

Senator Harris has been posing as a former poor black child from the â€œghettoâ€ â€“ sort of â€“ who had to endure the horror of busing. But her parents have no direct African ancestry, and there is no evidence that she grew up poor or disadvantaged. Her mom was Indian â€“ turban, not war-bonnet â€“ and her pop was Jamaican. Evidently both parents were well-educated Ph-doctors with high-powered jobs. But there is a connection to slavery. Another report discloses that her Jamaican ancestors owned slaves. (So far the senator hasnâ€™t applied for the Order of the Walking Eagle1 award â€“ although she is certainly eligible.)

The color-thing, as some might call it, is being widely touted as the senatorâ€™s main credential for the #2 spot on the Biden-ticket. Indeed, the senator has bragged on it, herself. Although she served as California Attorney General, she seems anxious to keep that tidbit from her past on the down-low â€“ probably to avoid offending BLM-rioters and the â€œdefund-the-copsâ€ crowd. The senator hasnâ€™t exactly apologized for jailing all those brigands, pot-heads and killers during her earlier career, but she tap-dances around it, hoping that friendly reporters will raise no inconvenient questions about her former association with white supremacist law-persons. (Where is the â€œmemory-holeâ€ when you really need it?)

A good friend of mine grew up in India, but came to the USA to study in the early 1960s. Eventually he became a naturalized citizen, and had a long career as a scientist for a federal agency. Like many people of his country of origin, his skin is a medium shade of tan. One time I asked him if his colleagues thought he was white or black. With a twinkle in his eye he said, â€œMy white colleagues think Iâ€™m black, and my black colleagues think Iâ€™m white.â€ I know he got (and held) his position because of his academic credentials, experience, and technical skills. Race was certainly not one of his â€œcredentials.â€

But in Senator Harrisâ€™s case, race and gender are touted as her primary qualifications for the VP-job â€“ as she, Mr. Biden, Democrat pols, and media reporters endlessly remind us. Most Americans wouldnâ€™t consider being operated on by a doctor who gained his (or her) title because of race or ethnicity. Yet a significant faction think itâ€™s perfectly OK for the second chair to the most powerful leader in the world to be chosen in exactly that way. (Go figure.)

A candidateâ€™s skin-color is now a credential for that office which outweighs intelligence, personality, honesty, leadership skills, and the ability to work with various interests. Is this really where we want to go? Just how far are we willing to follow a fixation on the color of a personâ€™s skin? Havenâ€™t we thrown all that racist rubbish on the trash-heap, where it belongs? Years ago, William Faulkner wrote: â€œIn the South the past isnâ€™t being relived; the past isnâ€™t even past.â€ Is that our objective? 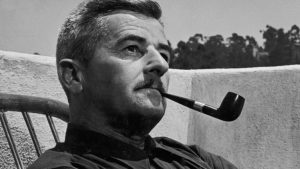 In articles posted earlier this year I argued that since 1960 Democrats have managed to win the presidency only with â€œmystery candidatesâ€ whose political positions were unknown or unexamined. To support my theory I reviewed candidacies of John Kennedy, Jimmy Carter, Bill Clinton, and â€“ the champ of them all â€“ Barack Hussein Obama. Each one:

When Senator Obama ran on his Hope and Change shtick, he gave some open hints, either deliberately or by accident, on what he planned to do â€“ i.e., redistributing wealth, opening our borders, bankrupting the coal industry, stopping shale-oil fracking, making electricity costs â€œskyrocket;â€ etc. Yet adoring crowds still ran after him, like children running after the Pied Piper of Hamelin, because he â€œlooked and sounded so good,â€ as one caller to a radio talk-show recounted. â€œSure, I voted for him,â€ he said, â€œbut I never thought he would screw up this badly.â€ It was a â€œmystery candidacyâ€ for the ages â€“ hopefully never to be repeated.

With a half-century of public â€œserviceâ€ behind him, Joe Biden could hardly hope to run as a mystery candidate, His positions are well known, and the audio-video record is chock-full of his gaffe-a-minute forensic style. TV-clips of him sniffing the hair of attractive women have made the Playboy Hit-Parade. He is an entirely known quantity. (Much too well-known, those ladies might say.)

Unexpectedly, the COVID pandemic arrived to keep Mr. Biden hidden in his basement â€“ well away from votersâ€™ eyes and ears for months on end. Whenever one of his semi-coherent statements is released, friendly media organs edit the most embarrassing passages out of the clips. By midyear, with voters preoccupied with the virus, Joe Biden found himself riding a â€œbasement campaignâ€ to big leads over President Trump. By staying out of sight, he became a re-invented â€œblank slate,â€ and his poll-ratings soared to reflect approval based onâ€¦wellâ€¦nothing, really. Seeing how successful it has been to keep Joe out of public view, members of his inner circle have started talking of keeping him away from the televised in-person debates which have been established presidential campaign-events since 1960.

An ancient nugget of American political wisdom is: â€œYou canâ€™t beat somebody with nobody.â€ It grew out of our nationâ€™s political experience long before the advent of radio, TV, and internet, in which candidate-images, real or invented, are continually spun. I donâ€™t know if that wisdom still holds, but this campaign will probably tell us. Donald Trump is a known (and formidable) quantity, while Joe Biden has been running not only as an â€œempty suitâ€ but as a phantom candidate with no suit at all. 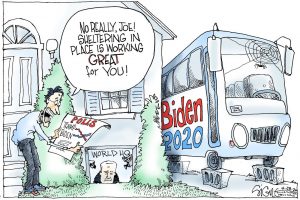 The Biden camp kept the â€œphantomâ€ shtick going as long as it seemed effective, but when they saw Joeâ€™s numbers slipping they knew they had to re-energize the act. Voila! Enter Senator Harris. Beyond her highly-valued gender and racial bona fides, she brings a known record as a radical, far-left California pol. Political analysts say she is farther left than Bernie Sanders. This makes liberals ecstatic, since the conventional wisdom is that sooner or later â€“ hopefully sooner (if the fates allow) â€“ she will take over as president, after Good Old Joe falls over, has an unfortunate accident, or runs off with a campaign aid-ette.

But Senator Kamelaâ€™s entry into the presidential sweepstakes has left many Democrats and Republicans puzzled over whatâ€™s become of Joe Bidenâ€™s â€œmoderate centristâ€ campaign and his basement mystery candidacy. The latter was supposed to recast him as a competent, reassuring new leader who would ride in to restore peace and â€œnormalcyâ€ to a nation which has been turned on its head during Trumpâ€™s unsettling term. “Normalcy-Joe” was going to appeal to nervous independent voters. What happened to that guy and that campaign?

To counter what looks like a redirection of the Biden campaign â€“ signaled by the selection of far lefty Senator Harris â€“ Big Media has led off by unanimously describing her as a â€œpragmatic moderate.â€ This is supposed to assure jittery centrists that whatever those rascally Republicans might claim about Kamela, Good Old Joe is still running on his soothing â€œsave the countryâ€ platform. Nothing to see here. All is well.

These could be just the opening salvos of a mighty media effort to recast Miss Kamela as a completely different brand of politician than she has been for the past thirty years â€“ as a â€œkinder, gentlerâ€ radical leftist, if you will. But on the other hand, it could just be half of a â€œHoudini strategyâ€ which attempts to:

If the Biden-Harris team can pull this off, it will be a feat of legerdemain that would have amazed The Great Houdini himself. And, unfortunately, it will also prove that Americans are dumber than I ever imagined we could be.

We mustnâ€™t let this gang get anywhere near the White House â€“ not even the basement.