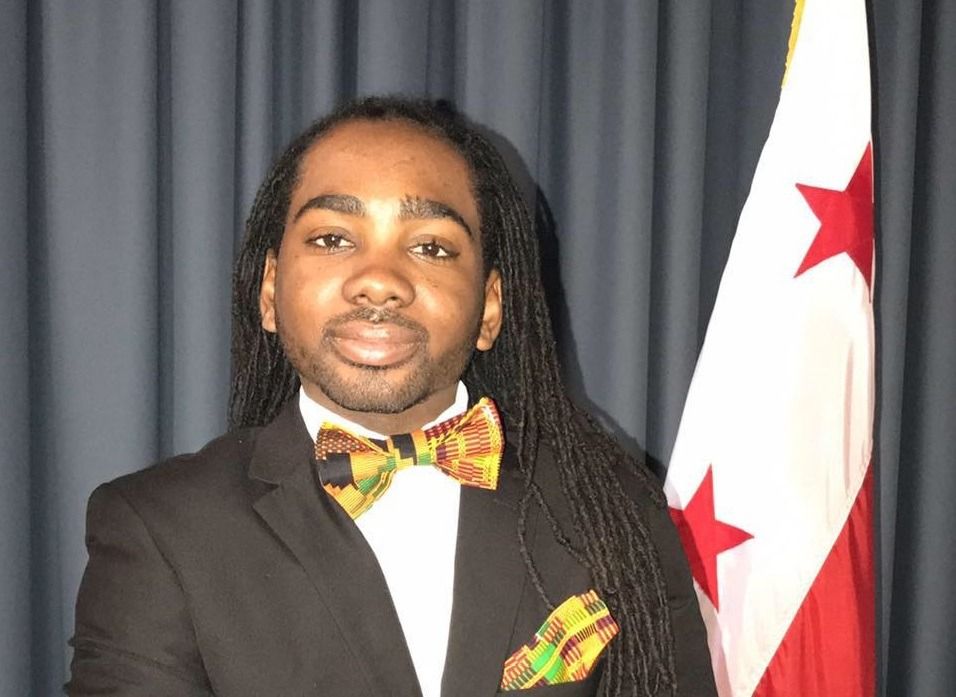 The hypocrisy of ‘Trayon and the Jews’

Had a Republican said what this DC Councilmember said, he or she would be ridden out on a rail

In the 11th month of my first year as a Loudoun Supervisor, I said a local group of atheists, who had made a big do for three previous Christmases about the creche being on the Loudoun Courthouse lawn, were behaving “like a bunch of terrorists.”

My comments, first reported in the Washington Times in November 2012, soon went viral, thanks also to me making the fatal mistake of being interviewed on Channel 4.  The segment even aired on the Leftist “The Young Turks” and the Huffington Post.

Although I apologized on air and said it was a “poor choice of words,” (Probably meant “extremist” but “terrorist” came out of my mouth and into print,) atheists from around the nation came down on me, leaving threatening voice mails and comments on my Facebook page.  Local Democrats also made hay about it.

I removed myself from lighting the menorah at the Town of Leesburg’s annual tree lighting event and was never invited back by the mayor (a Democrat).  A local councilmember condemned my remarks, too.

At a subsequent board of supervisors meeting, I had to withstand an hour of verbal rebuke by atheists and Democrats who demanded my resignation.  I was not censured by our all-GOP board, but our pseudo Republican chairman, Scott York, spent the next month marginalizing and ridiculing me on the dais whenever he could.  His top aide was an atheist and disliked me, so York also yanked my chairmanship of a Joint Schools Committee.

Thankfully, the faith community came to my defense, but my fellow synagogue members shunned me and the rabbi offered no solace whatsoever.  I soon left that congregation.

The Anti-Defamation League (ADL) called me to “discuss.” My aide resigned to take another job the next month.  My name was forever in the Google hits and it hurt me when I applied for jobs.

I finally resurrected myself and was only asked once about it in 2016 when I ran for Council.

Flash forward to this past month with one DC Councilmember Trayon White, a Democrat and African American, who made the outlandish remark that the Rothschild banking family, who are Jewish, control the weather.  He said in a video: “Y’all better pay attention to this climate control, man, this climate manipulation…that’s a model based off the Rothschilds controlling the climate to create natural disasters they can pay for to own the cities, man. Be careful.”

Jewish groups and rabbis stepped in, but instead of demanding a resignation or censure (he did apologize for the remarks), they decided to give White an “education.”  He was invited to a Passover seder and was given a tour of the U.S Holocaust museum with a local female rabbi as the guide.

There, his aide asked inane questions about whether the Warsaw ghetto was “like a gated community.”  “More like a prison,” the rabbi said. He saw a photo from mid 30s Nazi Germany with Storm Troopers surrounding a Jewish woman and asked if they were “protecting her.”  The rabbi said “they were marching her” (parading her around in ridicule, no doubt).

Then, “The Washington Post” discovered he used campaign funds to contribute to a Lewis Farrakhan speech in Chicago, where the aging Nation of Islam leader gave among his most anti-Semitic tirades of his career.

Only then, did Jewish groups pounce. It took a week before the liberal Jewish Community Relations Council of DC, which arranged for the Holocaust museum tour for White, and American Jewish Committee (which is decidedly more neocon) to ask for the Council to reprimand him.

Three members of the all-Democrat DC City Council, one Jewish, announced they would bring him up for censure.  But when the vote was taken  April 23, only these three voted for rebuke and it died.

Council President Phil Mendelson, who is Jewish, defended his vote saying: “The contribution is under investigation, and the time to react is when we understand or get the conclusion of that investigation, which I hope is quickly.  But I do recognize the inappropriateness of supporting anti-Semitic organizations.”

Inappropriate?  It’s more than that — it is despicable.

Council member Elissa Silverman (I-At Large), who has been critical of Farrakhan’s local influence, and is Jewish, was so accommodating to White, it made my stomach ill. The Post reported: “She doesn’t think a reprimand would be warranted because other lawmakers who misused constituent service funds weren’t reprimanded.”

In his defense, Martin, 34, did not grow up in the 1970s-90s era when the Holocaust was all over the news.  He was but nine when the Museum was established. Also, anti-Semitism and anti-Israel views are much higher in the black community, especially in urban areas.

However, he is an adult and politician and you’d think he would at least get an ounce of the rebuke and criticism I got in 2012.  But there is a double standard when it comes to Democrats and minority Democrats at that.

When a Republican, like me, uses the “terrorist” word to describe just one group of atheists, we get accused of saying we feel that way about ALL such folks and lose our chairmanships of committees. Even if we apologize profusely, we face much stiffer consequences and rebuke from the liberal media.  Even our own Republicans jump on us.

Recall the numerous GOP leaders and candidates who asked Trump to get out of the 2016 race when his remarks about women and their vaginas or the 2007 resignation of Senate Majority Leader Trent Lott for making favorable comments about one-time segregationist Strom Thurmond.

What’s even more unbelievable about the Tryon White matter is the total lack of attention from the national media, including conservative media and DC’s other newspaper, “The Washington Times.”

Angering me even more is the coddling White got from the local Jewish community and the failure of Jewish councilmembers to put aside partisanship and censure him.  Even the Republican Jewish Coalition, which condemned a GOP House candidate, Arthur Jones for his anti-Semitic comments but has said nothing about White.  Did the Anti-Defamation League arrange for a chit-chat with White like they did with me regarding the creche?

It’s dismaying that American Jews will get dystopic about Donald Trump, Steve Bannon and Charlottesville, but won’t say “boo” about the Nation of Islam and their sympathizers who helped organize the recent anti-Trump “women’s march” in DC.

There are explanations for all of this, which I hope to address in a future TBE column as we observe, next month, the 70th anniversary of Israel’s creation.

The hypocrisy of ‘Trayon and the Jews’ was last modified: April 24th, 2018 by Guest Contributor Ken Reid

[…] was able to abscond without any censure or reprimand from his liberal colleagues, despite making outrageous anti-Semitic statements, asking inane questions during a tour of the National Holocaust Museum in Washington (and then […]

I know it is too little, too late, but Trump would have doubled down not tried to apologize or explain. We all make poor choices in words but to continue with an apology tour amounts to feeding blood to sharks. I have no trouble with either terrorist or extremist – and would defend both. I point out that every day we hear and see crazy, vitriolic and unbelievably ignorant things from the left and they not only don’t apologize they keep up a constant drumbeat until appearance becomes a reality. My view is to confront confrontation particularly in the current political world being given to us by global socialists whose intent is to tear apart the very foundation of the USA.

You might be correct. Perhaps if this happened in the Trump era, i may not have apologized at all. However, they are not “terorrists.” Zealots and extremists maybe, but terrorist was not the right word to use. The point of this article is to show how a Democrat who uses dumb language gets away with no reprimand at all, and is treated to passover seders and a private tour of the Holocaust museum (the average person has to wait months to get tickets), but I get the wrath of liberalism thrown at me, lose my aide,, lose my commitree chairmanship, and am not invited to do the menorah lighting until 2016 when a new mayor was in charge.

Or it is the Atheists that control the weather machines.

This post modern political correctness crap fouls up the gears of our Republic — we should not play dat.

Trayon is a nutter, crazy as the day is long, and still more ignorant. Good people shun him, regardless of their party affiliation or his.

Ken Reid – you are Jewish, and very likely an Ashkenazi Jew. My mother is Ashkenazi and therefore my DNA reveals that I am a little over 50% Ashkenazi Jew. I would have perished in Hitler’s gas chambers no matter how patriotic I was or how devout of a Catholic. You are as politically astute as I am – if not more so. Therefore, you must bethat we Ashkenazi exert an influence in the American news media that is WAY, WAY, WAY BEYOND our numbers. For ABC, CBS, and NBC every network CEO and news president is an Ashkenazi Jews. It is precisely this monopoly of influence exerted by our cousins that fuels the line of “Jews controlling the media.” I don’t use those words because I believe we occupy those positions due to our very high IQ and our media and political drive and savvy. However, if you have anyone to complain about, I suggest you start at your local JCC where I am sure you are bound to bend an ear of one of those responsible for this egregious double standard.

Good points. Hope to see you write some more good stuff up here!

The news media is on the side of the Democrats. Look at the scope of Federal Spending and government spending in general. Even though the majority of politicians are Republicans, the majority of civil servants are Democrats. Most of the mass media is owned by large corporations. They take one look at the six trillion the government spend every year and reams of tax laws and regulations, and then they focus on their profit line. Yep! They are going to give the Democrats favorable media coverage.

The stupidity is the Republicans who, as noted, pounce on one another and help Democrats out. Republicans need to accept that politics in America is a knife fight. If Democrats won’t punish their own for doing wrong, then Republicans must respond in kind. We need to exert our middle finger to liberals more often.