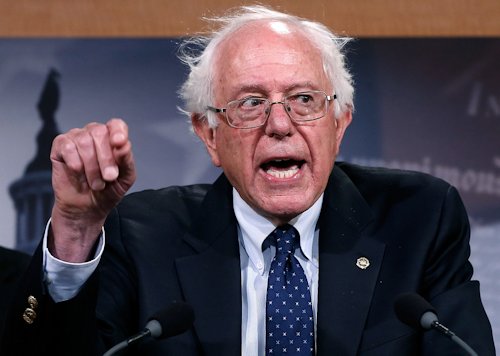 The Ideological Imperialism of Bernie Sanders

In the Pope’s view, and I agree with him, we are living […] in a world which worships not love of brothers and sisters, not love of the poor and the sick, but worships the acquisition of money and great wealth.” – Bernie Sanders, September 14, 2015 – Liberty University

When Bernie Sanders spoke to the students at Liberty University in the fall of 2015, the Vermont Senator established himself as the principle caricature of socialist idealism in the 21st century. He hit every emotional cliché crafted carefully over the generations by “the left” – woven strategically for an audience of Christians, most likely to be within their own heightened state of youthful idealism, to plant the seeds of white guilt and the regret of privilege. Truly, it was a brilliant speech (reprehensible as it was).

While all terms for “the left” have been discredited, or defined so specifically as to have become impossible to use in conversation, I will refer to this liberal, socialist, marxist, progressive ideology simply as “ideological imperialism”. We’ve all heard the phrase, “I am my brothers’ keeper” – but while this statement may say something about you and how you feel, it certainly has never obligated your brother to a similar affection or commitment. This is the dilemma which the ideological imperialist must overcome.

The ideological imperialist judges the world according to one primary standard which depends upon the foundational principle of uniformity. Justice is viewed as a uniformity of outcomes. In a just world, individuals who are trying to live their lives ought to experience similar outcomes. Differences in outcome are, by definition, unjust and therefore a cause of great concern. You must remember that when we are talking about ideology or idealism, we begin with “our ends” and work our way backwards intellectually.

For example, economic equality is considered to be an ideological good. Therefore anything which prevents economic equality is unjust. Anything that causes economic inequality is bad by virtue of it’s consequence. Whether or not these causes are objective or natural is quite beside the point. If something causes economic inequality, then it is by definition bad. The idealist and the ideologue do not view reality as being morally neutral. In other words, if I want to get from point A to point B, and there is a mountain between them making it harder for me to get from one point to the other, I do not simply accept that mountain as an unfortunately aspect of reality, but rather as an injustice, as “something bad”.

Therefore, the idealist views government as a tool to curb these natural impediments. If you want to build a railroad through a mountain, it will require quite a bit of dynamite (or force). The same is true if you wish to create economic equality in a world which does not naturally produce it – to accomplish this end requires quite a bit of force. That force is the perfectly natural and legitimate function of government, in this view, and such force becomes the policy of ideological imperialists.

However, this exercise of force and this necessary rejection of reality inevitably leads to all manners of catastrophe, suffering, and dysfunction. Therefore, these idealists are forced to constantly justify their policies as necessary means to ends which morality dictates we are obligated to achieve. They view this way of thinking as entirely natural, as Man has employed such thinking in his interaction with nature for thousands of years. Rivers are bad because they make it harder to get from one side to the other, so Man builds bridges and defeats nature. Mountains make it hard to travel and Man blasts tunnels. Coal is hard to get, buried underneath the earth, but Man digs mines, forces their way down to the coal and takes it, by force.

There is no reason, in their mind, that Man ought not deal with Man the way Man deals with Nature.

“‘The worship of the ancient golden calf has returned in a new and ruthless guise in the idolatry of money and the dictatorship of an impersonal economy lacking a truly human purpose,’” he said, quoting Pope Francis. (Sanders, Liberty Speech)

It is important to understand that the economy is not a mountain, nor a river; the economy is people. The economy is people building, manufacturing, and providing services for other people at an acceptable rate of exchange between both the buyer and the seller. A free economy is the most truly human thing any human can experience; and yet Senator Sanders finds it to be immoral, because any single economic exchange is an exchange by and between individuals, and not an exchange on behalf of Mankind as a whole. The role of government, therefore, must be to restrain these free exchanges between individuals on behalf of Mankind as a whole, and judged by virtue of the consequences of the exchange relative to its effect on the larger uniformity which, morally, must be our goal.

Now here is my point. Some of you may agree with me, and some of you may not, but in my view, it would be hard for anyone in this room today to make the case that the United States of America, our great country, a country which all of us love, it would be hard to make the case that we are a just society, or anything resembling a just society today. (Senator Senators, Liberty Speech, Washington Post)

Why are we not a just society? Because we are not uniform, we are not equal, we are not all experiencing the same outcomes.

In the Oliver Stone film Alexander, the historical character Ptolemy, played by Anthony Hopkins, admits about Alexander the Great, “I never believed in his dream. None of us did. That’s the truth of his life. The dreamers exhaust us. They must die before they kill us with their blasted dreams“. The same is true of the idealists and ideological imperialists.

Man is not like a mountain you can blast through or a river over which you build a bridge – He is not a bonsai tree to be dwarfed, trimmed, and shaped through force on behalf of justice. Man is a free and independent being, meant to achieve a moral and ethical civilization through the voluntary exchange of goods and ideas which lift the societal standards of all, despite such natural inequalities which serve as the consequence of genes, or luck, or will power.

One of my favorite songs was written and performed by Rush, entitled The Trees. I’ll leave the poetry below, as a post script, and to solidify the point.

There is unrest in the forest
There is trouble with the trees
For the maples want more sunlight
And the oaks ignore their pleas
The trouble with the maples
(And they’re quite convinced they’re right)
They say the oaks are just too lofty
And they grab up all the light
But the oaks can’t help their feelings
If they like the way they’re made
And they wonder why the maples
Can’t be happy in their shade
There is trouble in the forest
And the creatures all have fled
As the maples scream ‘Oppression!’
And the oaks just shake their heads
So the maples formed a union
And demanded equal rights
‘The oaks are just too greedy
We will make them give us light’
Now there’s no more oak oppression
For they passed a noble law
And the trees are all kept equal
By hatchet, axe and saw