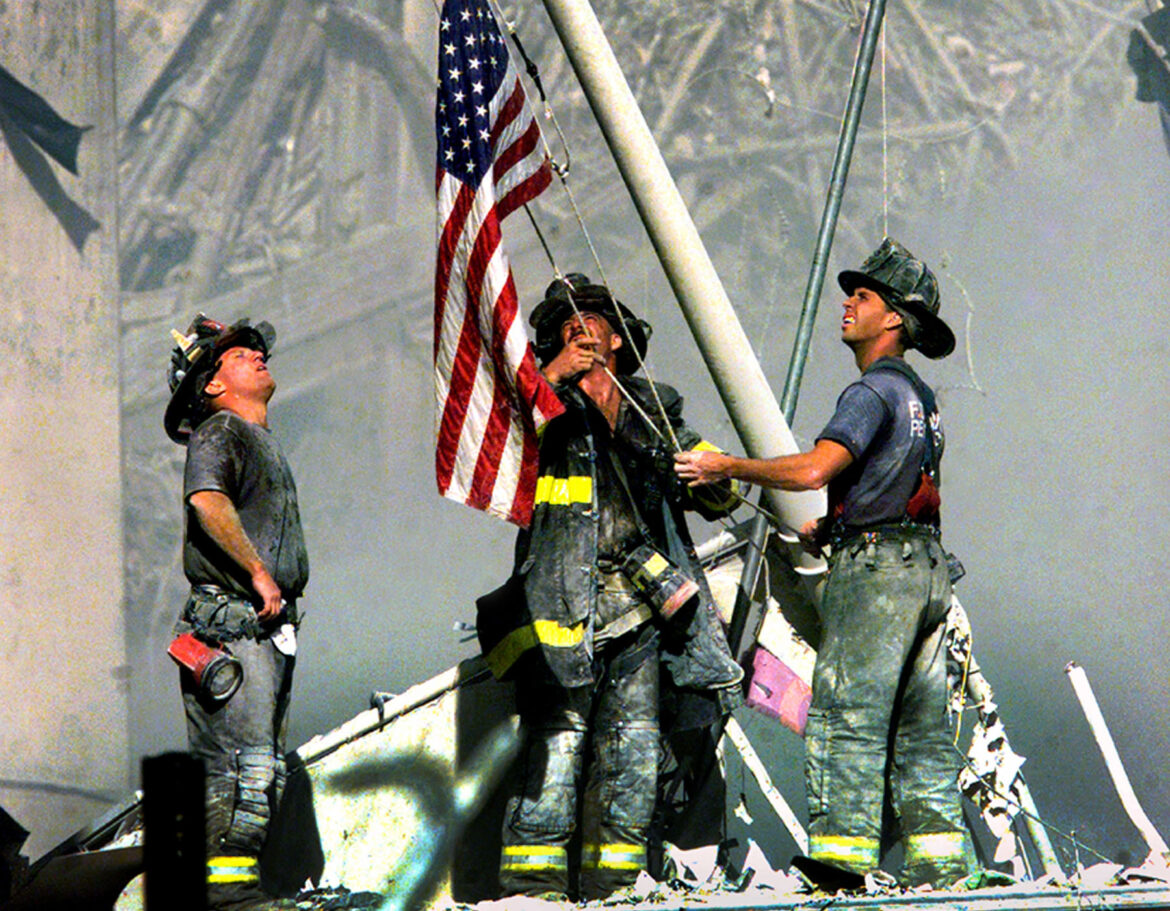 After twenty-one years one would think that the haunting images of 9/11 would fade  away in the fog of time. If anything for me and I suspect others, on the anniversary of 9/11 they have grown stronger as our mind continues to process the trauma of an event that occurred over a decade ago. Every day when I walk past the photograph of my  Pentagon office, I still see the faces of my former “shipmates” looking back and asking “why me” before they perished in an inferno that no one could survive.

Perhaps it is due to “survivor’s guilt” that  I am not ready yet to fully process their loss; however, in the meantime, there are two other images from that horrific day that continue to haunt me both day and night.  These images define the tragedy of innocent lives lost and our national resolve and unity to avenge their senseless loss.

The first is the video of a young woman jumping from the conflagration at the top of the Twin Towers to meet certain death. In her last moments on earth, she had the presence of mind to hold her skirt down in an act of modesty in her final moments of life.  Perhaps, a small but yes symbolic gesture that will ever define her humility and grace under pressure.

The second image is the group of New York City firefighters along with their chaplain who are suiting up and preparing to advance towards the raging inferno in the Twin Towers. They knew that a mass fire on the upper floors would ultimately weaken the structural integrity of the building and it would soon come crashing down and entomb them in the rubble.

One need only look into their eyes to see that they acknowledged they were doomed to die but yet they knew it was their duty to press on in an attempt to save their fellow man. That day they demonstrated the reality of John 15:13  “There is no greater love than to lay down one’s life for one’s friends.” Yes, the images of that day will forever define who we are as a nation but for many of us who survived we are burdened with the guilt that we did not perish.

I like many veterans and first responders have PTSD but through shame and its associated stigma neglected for many years to seek treatment thinking I  could carry the burden myself. This impacted not only my mental and physical health but unfortunately those closest to me. PTSD is not a sign of weakness by rather our defense mechanism to deal with the trauma that is great to bear.

If this defines you seek professional help if not for yourself but for your loved ones.  After all, PTSD is a warrior’s sickness, not a coward’s sickness. There is no shame in admitting that you need help – make that your legacy to those who died on 9/11.

I guess this is the 21st time we have relived 911? When does it end? How many times have we relived the reasons for 911? Zero?

I moved forward long ago. I kinda let it all go when the National Security advisor at that time, Condi Rice was promoted a few years later. Sorta like George Floyd is a hero after passing counterfeit money while being high on Fentanyl and resisting arrest. And the arresting officer got life in prison. And, then the corrupt government convicted him twice for the same crime, which is unconstitutional. Write about that.

More BS. Why is a Queen or anyone else 3000 miles away who lived 96 years, possessed riches beyond belief, never worked a day in their life, supposed to be so important to me? I am sorry for their loss, but she had 96 years. Remember, their loss.

People abandon God to worship people on the other side the planet, and riches. Strange, but people will gladly worship anything but the Lord.

And just look at the results.

Does anyone relive WW1? How about WW2? With the passage of time there is no one left alive to relive ancient events so things go into history books. 9/11 is still alive. The injuries are still occurring. Give it 75 years and it will be like WW2 is today. Give it 100 years and it is in the history books like. WW1.

Ah this isn’t the place for this comment.. but well here goes… This event as horrible for individual people as it was, was a watershed event in history for the US. It launched the neocons into policy prominence. It set off twenty years of stupid useless bankrupting wars… bankrupting except for the coffers of Lockheed Martin, Raytheon et al. It set the US on a disasterous course with neocons, not many of whom served in wars or sent their children to them, creating one ruinous stupid conflict in motion. after another..most recently Ukraine.
The US dollar is stretched to the limit know paying for the wars, the stupid attempts at occupying countries with trillions lost not to mention lives..
The dollar is now likely on its way out as the reserve currency. Putin is creating a new currency standard. He plays chess and we have Dopey Joe and his merry band of neocon jagoffs playing tic tac toe and not well.. All this so the neocon bastards of three administrations can muck around in Ukraine… with no clear goal there except to f with Russia.. So these idiots launched an economic war on Russia that they are losing big… and taking the West down with it.. So much for the bankers “soft power”… You can only print so much money when the other guy has what is the real value… i guess you can burn the Euros in your fireplace, but Putin has your energy dumbasses.. Note to the neocons and bankers: when the US is no longer the reserve currency you’ve got some big debt issues… the world won’t lend to you nor can you monetize your debt to pay for the MIC but worse… the welfare state. I say worse because when that welfare state is under stress… well those George Floyd Riots two years ago are nothing compared to when that welfare state is cut back..
There is a horrible human tragedy in the day… but another tragedy is that it exposed the US and its policy makers as morons..God bless those people and their families affected by that day and the people and families thrown into twenty years of conflict… for what?