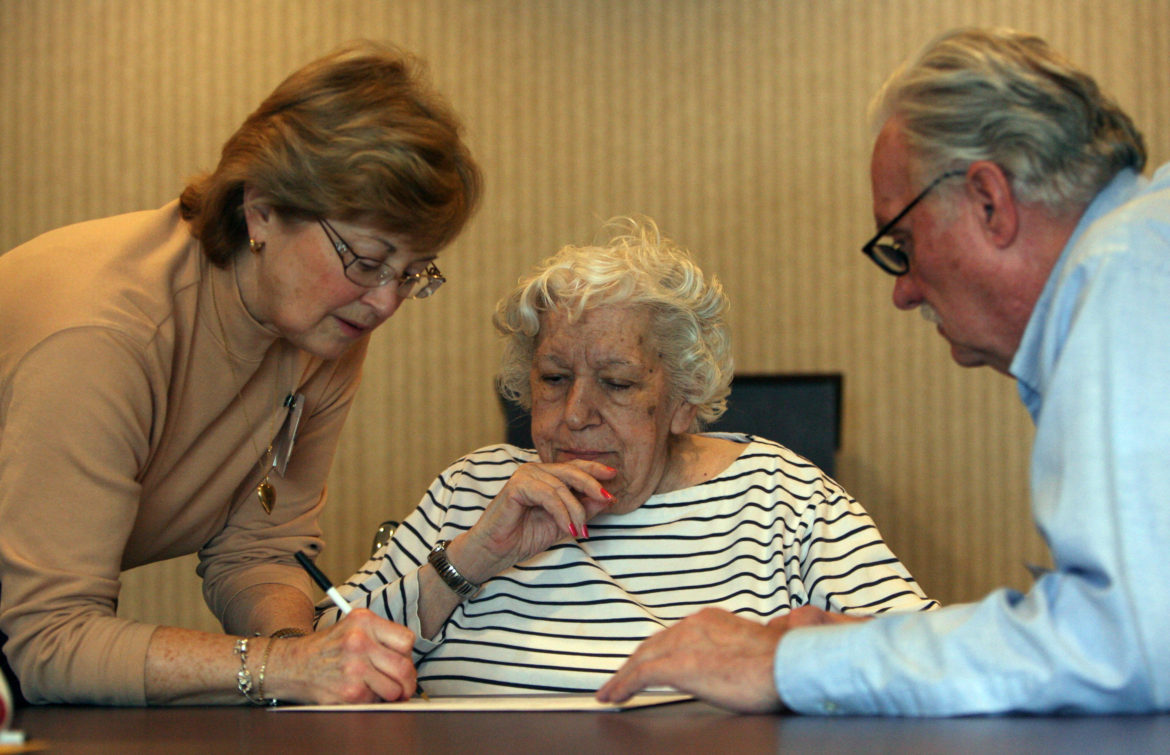 The Importance of Nursing Home Voting

The following story is true.  The names have been omitted to protect the innocent and not interfere with a possible ongoing investigation.

Several months prior to the 2016 Presidential Election a conscientious Commonwealth Attorney received a packet in the mail from the county’s General Registrar.

The Registrar also being a conscientious public servant, responsible for registering new voters, maintaining the state’s online Voter information system (VERIS),  planning and execution of preparations for the coming elections, and processing the 32 Absentee Ballot Requests by Mail that were sent in from the local Nursing Home.

The Registrar noticed that all of the 32 Absentee Ballot Requests form were filled in by the same person, presumably an employee at the Nursing Home.  There were also questions about some of the signatures on the form.  This prompted the Registrar into making copies and mailing them to the county’s Commonwealth’s Attorney.

Receipt of the forms from the Registrar prompted a call to the Captain of the State Police Barracks to request an investigator to begin looking into what was going on at the Nursing Home.  The story gets better.

The Detective shows up at the Nursing Home and proceeds with questioning of patients.  He approached two elderly female patients in a semi-private room, identifies himself as a member of the State Police and asks the lady in the first bed if she remembered filling out and signing the Absentee Ballot by Mail Request.  She responded that she had not voted in years.  Her roommate tried to remind her that patients were assembled in the eating area to sign the form provided to them by the Nursing Home.

At about the same time, a nurse’s aide showed up and not knowing who the gentleman in the nice suit was, informed the officer that the elderly lady in the first bed was demented and would not remember anything that happened the day before.

Of course during this time the Ballots requested were being prepared and sent to the Nursing Home by the Registrar’s office.

Eventually, the person that had filled out all 32 of the ballot requests was identified and was scheduled to be interviewed along with the Nursing Home Administrator.

At this point, I have to stop my narrative since the investigation is ongoing and what happens next is up to the Commonwealth Virginia.

I can report, since it is now five months after the election, that none of the official ballots sent to the Nursing Home were received by the Registrar prior to November 8th.

So what can we learn from this little story that occurred in a small county in rural Virginia:

We need to wake up to the fact that we are in a fight for control of our government by the left by any means necessary.  Being nice and accommodating is the natural response by most conservatives.  The left is playing hard ball, and we are playing with bean bags.

The Importance of Nursing Home Voting was last modified: May 23rd, 2017 by Guest Contributor Reagan George

Wait. Democrats say there is NO voter fraud ANYWHERE even though people have been jailed for it. Do you mean to say Democrats are liars?

If interested, here is a link to a series of articles by Chris Wright about nursing home voter fraud. I highly recommend it

Reagan and Jeanine – thanks for posting this, never thought about how the libs can infiltrate a nursing home. Showing they’ll stop at nothing and there’s never going too low for them. Despicable.

Sounds like a great opportunity to increase jobs for Republicans.

As an Election Officer for many years, I can attest to how the Democrats bus in nursing home residents to the polls and “help” them vote.

This is a serious, ongoing problem.

OBVIOUSLY, the voter can mark anything she or he may like. In the precinct where I am an official (for many years) there are many voters who fill out the proper form to have assistance. In your county why don’t you request an audit of all the ‘helper’ forms to see if there is any biased used of the forms. For example, as you claim, you should be able to discern from the ‘helper’ forms IF a local political party official(s) is ‘helping’ more than one voter during the election day, or if a local political party official is requesting numerous absentee ballots on behalf of a nursing home, etc If you cannot produce evidence you appear to be ridiculous. Perhaps you also believe that aliens are voting in mass numbers after hypnotizing Officials to see them as the voter rather than with those monstrously large black eyes? Perhaps you also believe that you have magical powers of special knowledge like Tinker Bell? All of ya’ll hocus pocus’ ‘mumbo jumbo’ ‘tweeting twatting’ Republicans need to gather your evidence and present it, IF you are serious.

I find the author’s story to be entirely credible. I have worked as a poll watcher and have seen the busloads of people arrive from the nursing homes. Some are lucid and can present ID’s and respond to questions. However, there are many who are clearly confused, who don’t know where they are, or why they are there. Those people are accompanied to the voting stations with their “helpers” to “assist” them with their vote. There is no doubt that there is abuse/fraud happening, but it is practically impossible for the local election official to stop it. They are not equipped to make mental evaluations on the spot in a busy polling station, and they never deny anyone to vote on that basis. If the helper presents a valid ID for the voter, and the voter doesn’t object, they are both going into the booth to cast a vote.

So in one sense you are right…. nobody can prove anything. But if you ever worked the polls, you know damn well what is happening, and it is shameful exploitation of the elderly for crass political advantage.

WHAT a hideous suggestion by the writer: to create barriers to old and sick people from voting! WHAT’s next Republicans: DEATH PANELS?! Oh, yeah, you already voted to HASTEN THE DEATH OF OLD PEOPLE in the House-passed Trumpcare. Now we know: Republicans like DEATH PANELS when it suits their wicked purposes.

LOL You forgot the /sarc tag on your post.

The writer of this article is AGAINST the Democrats’ exploitation of the sick and elderly.

No, it seems that Trumpcare – as passed by the House – will give away billions to the wealthy while charge the sick and elderly higher premiums and co-pays. That is Trump-Death Panels.

Just remeber that the only barrier created in this instance was by the nursing home administrator and staff with no regard for their patient’s voting priviledges. When they knew that their voting fraud scheme was found out they did not hesitate to ditch each of their patient’s ballot. Sunlight is an effective disinfectant.

Its all mumbo jumbo hocus locus tweets twattsie … unless you take you concerns to authorities. Your local electoral board. Your local Commonwealth Attorney. PLEASE DO!

You might want to read the article before commenting. The story was told to me by a Commonwealth Attorney. How much more authorative can it be.

Pardon. We were eager to see what charges were made and didn’t see any. Apparently, none, yet.

You are correct, to my knowledge the investigation is on going. The point is that the Nursing Home did not hesitate to deny their patients their vote that they were so eager to assist them in their voting that even though the ballots were sent to the Nursing Home they were never mailed to the Registrar before the election. So much for vote suppression. Sounds to me that this might be tampering with the US Mail. Maybe the wrong Prosecutor is involved.