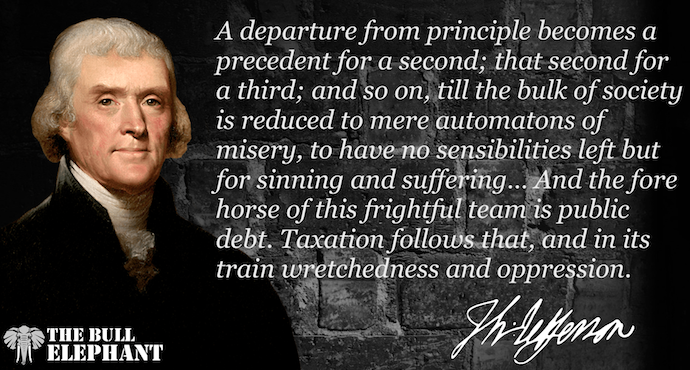 There is an old saying that the difference between a rich man and a poor one is based on the direction of compound interest.  With their ability to invest, the rich use compound interest for their benefit.  But for the working class, often mired in debt and interest payments, compound interest is like a heavy chain around the neck.

Our government is a case study of the latter, and there can be no doubt that deficit spending is going to catch up with us.  Because current estimates indicate that by 2030 just entitlements and interest payments on the nation’s debt will consume all projected revenues, with nothing left for defense and discretionary spending.  So, how will folks react when the bills come due?

Consider today’s children, and what they will face in 2030 as they are beginning their adult lives and getting started in their careers.  They will have to pay high federal tax rates to support the nearly 70 million Baby Boomers, plus the welfare class, and then interest on the debt that they had nothing to do with.  Does anyone think they will gladly fork over their money to a government that offers them nothing but a never ending pile of bills to pay?  Speaking of Baby Boomers, I can almost guarantee there will be serious proposals to implement means testing of Social Security and government pensions.  There will also be proposals to nationalize millions of 401k’s and IRAs.  This huge demographic is not going to be happy at all, and blood will boil.

And finally, what about the huge welfare class, whose members have often been raised on WIC, food stamps, Medicaid, and SSI?  Does anyone think this demographic is going to accept the coming austerity peacefully when the inevitable reduction of their benefits is mandated?  And should the federal government fail just one time in replenishing those 50 million plus EBT cards on the first of the month, widespread food riots will likely occur and civil order may vanish in many parts of our country.

There is one group that stands to profit from this mess.  They are the banking elites, or what the Occupy Wall Street Crowd refers to as the “banksters,” who profit from this debt and have bought off politicians to fight every common sense measure to reign in excessive spending.  In fact, I could never fathom why politicians would oppose a balanced budget amendment, but once I came to understand the mechanisms of the Federal Reserve – in reality, a private central bank run for the profit of its shareholders – and the nature of our debt-based currency, then the pieces of the puzzle began to fit into place.

Over 100 years ago the banksters in America and Europe foisted the Federal Reserve System on the American people to create a financial system that worked solely for their benefit while forcing the rest of us to pay interest on the debt.  It is no coincidence that the Income Tax Amendment was added to our Constitution in the very same year, 1913, the Federal Reserve Act was passed.

We all know the bottom line.  The federal government has made so many promises to so many disparate groups that there are now inexorable demographic and fiscal forces moving to tear this country apart when the fiscal bill comes due.  And if anyone thinks that the USA is bound to hang together for an eternity simply because “the matter of secession was settled by the Civil War,” and the states will fall in line, then he or she is not living in Realville.

Mark, since the year began, there are signs that this world economy thing is unraveling.. When the debt and money creation by central bank bubble bursts.. oh boy, it is going to be ugly. Those who trust the central bank, crony capitalist insider world of managing the economy might look to the last crisis wherein they created a phony prosperity via easy home mortgages. Let’s see… loaning money in the form of ARM 7 year loans that are going to baloon.. to people who have a snowball’s chance in hell of paying those loans back… bundling those loans, applying lipstick to a pig in the form of insurance for the bundles… Now how did that work out?

Stonewall – you are correct. Third world immigrants will not save the day, rather they will usher in our demise more quickly. The Chamber of Commerce, along with their bought off stooges in the GOP Establishment, and German Chancellor Merkel think along the same lines and are producing the same disastrous results.

Aside from the obvious that our own populations are going to strain entitlements beyond the capacity of the tax base now.. the Democrats and GOPe want more immigration from the Third World. The Chamber of Commerce’s Tom Donohue just blasted the “nativists” last week yet again. Right now those entitlements are living on borrowed money… I love the fantasy that immigration is going to grow us into prosperity along with some schmlatzy idiocy about “we are all a nation of immigrants.” Now idiots, we are a nation of welfare.

I wonder where the elites will immigrate to when this country becomes the disaster that they have foisted on the population?

You are begging for a tax increase.

I don’t know who they are going to tax…

Whoever lobbyists want them to tax. In this case, as usual, the middle-class.

The Middle Class is shrinking. Badly. Those are the suckers who get to pay, not the elites who have a million ways to shelter income, but the middle class with their salaried income can’t hide from payroll taxes.

Right Stonewall. As I posted on FB recently, given my income, if my wife wanted to get a job she would be taxed at 28% federal, 5.75% state, 7.75% SS, 1.9% Medicare. That is over 43% of her income would go to taxes!!! But, most of the rich people get their income from investments which are taxed at a lower rate. So you are right. The middle class and upper-middle class bear the brunt of this bankster rip off.

you tax those with money. Makes no sense any other way. Sort of like why you would rob a bank…..