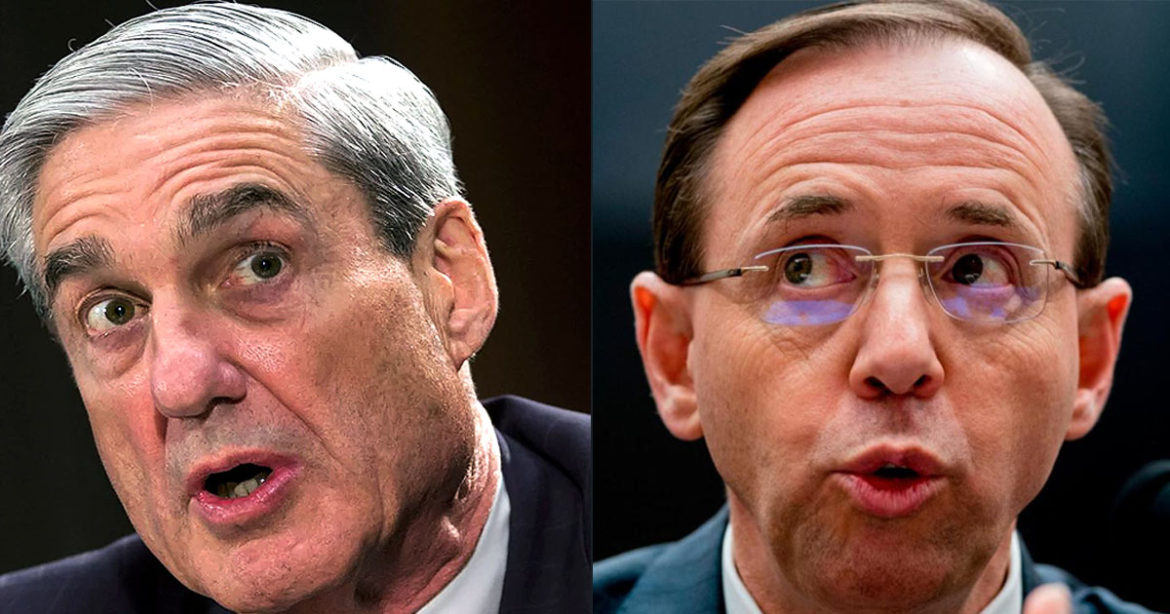 In some of the FBI/DOJ e-mails, there was a reference to an â€œinsurance policyâ€ in the event that Hillary Clinton lost the presidential election. Â It wasnâ€™t until recently that the real meaning of this was clearly understood. While there was rampant speculation over the implications, there was no clear and direct connections between those words and specific actions. Â As a result of this weekâ€™s reports on wiretapping involving the communications of the President, the Rosenstein appointed Special Counsel is the â€œinsurance policyâ€.

While the criminal behavior at the highest levels of the Obama administrationâ€™s DOJ and FBI goes unpunished, Muellerâ€™s Special Counsel runs amok far beyond what its mandate is or should be. Â Individuals who have marginal connections to President Trump or even no presidential election connections are being threatened, arrested and bankrupted by insinuation or appearance of illegality. Â The costs to defend themselves and their reputations from probing investigations unsupported by relevant or reasonable proof are extensive. Fake claims are made and the leftist media picks them up, embellishes them, and then runs them as page one news. Â This is a direct assault on the Constitution, the Rule of Law, and the American citizenry by a small group of socialist leaning politicians and their bureaucratic handmaidens.

What is most astonishing is that most if not all of the prosecutorial activity has focused on President Trumpâ€™s friends and associates – Â all too often before he even decided to run for president. The FBI invasions of Trumpâ€™s personal lawyer and a couple of confidants were draconian at best and frightening in their implications. Â The potential for a violent confrontation leading to injury or death was obvious but apparently not considered in the FBI /DOJ rush to activate the â€œinsurance policyâ€. The wiretapping of the Trump campaign and presidency by an agency of government that the president supposedly controls is stunning.

I remember the coup attempt against then President Nixon. Â First, Vice President Spiro Agnew was taken out because he â€œtook money under the tableâ€ while Governor of Maryland. Â The fact that every governor of Maryland up to that point â€œtook money under the tableâ€ was well known â€“ the governorâ€™s salary was a joke and quite insufficient to run the state or even live day to day.

Next came Nixon. Â The Watergate burglary was a â€œdirty tricksâ€ operation gone wrong. Â The burglary was based on the concern that the Democrat Party had been infiltrated by communists and socialists, and that their presidential run was tainted accordingly. Â Today, the Democrat leadership doesnâ€™t even bother to hide the socialist and communist foundation of their Party. (Bernie Sanders has carved out a sizeable group of Democrats who openly avow socialism to replace the American Democratic Republic.) Â Nixon made the mistake of underestimating the importance of the burglary and the hostility of the press. He resigned his office.

In a little over 6 months, we will once again go to the polls to elect federal representatives and senators. Â Â The Democrats and far too many Republican establishment leaders are hoping that the Democrats take over the Congress so that Trumpâ€™s populist agenda can be stopped by bogus impeachment attempts, shutting down any investigation of the FBI/DOJ â€œinsurance policyâ€ activity, or simply stonewalling President for the rest of his term. Â The situation here is beyond serious for the country. It is dire. Americaâ€™s opposition both within and without have the EU model of global socialism as its preferred form of government. Hopefully, the American citizenry has another idea, reinvigorating the meaning of the American ideal.

The Insurance Policy was last modified: May 6th, 2018 by Dr. Robert Warren

First off, let’s be clear. This is not just a Republican or Democrat thing. It is increasingly clear that Republicans and Democrats are virtually the same thing, and that operatives of both parties ‘elected’ to office find it highly palatable to enrich themselves by parasitically feeding off of the American body politic, and have done so in criminal acts for decades on end.

Remember, it was Catherine Austin Fitts of the first Bush administration who blew the whistle on HUD as being run as a criminal enterprise. Many decades later, it turns out that it was not just HUD. It was the entire Federal government with the States not all that much better. The establishment political class of both parties are as guilty as hell, both with blood on their hands and with an immense burden of responsibility for the degeneration of America into a cesspool of criminal corruption.

If I have a reservation about this article, which by the way I am very glad to see, it is that the article does not speak with sufficient sweep to the absolute nature of the fraud which has been deliberately and systematically perpetrated upon the American people by both of the Socialist/Marxist parties, Democrat and Republican alike, but also the uber-elites which these parties willing serve.

The fraud you speak of is not usually vested in an open and obvious coup using law enforcement powers – although you might argue that Nixon was the victim of such abuse. What is amazing to me is the coup by Democrats and the GOPe started virtually on the day President Trump was elected. Essentially, it was and is just too obvious and the constant insane screaming of the left has focused the minds of citizens on what is happening. When you overplay you hand, the results arenâ€™t usually in your favor. The global socialists have exposed themselves.

Donâ€™t let people like this the writer of this article try to flat out lie and mislead you to believe the Democrats are behind Trumpâ€™s legal woes. Or, try to move the focus to Obama or Hillary. Hillary and Obama are gone, have been for a year and a half.

Sure. The very first thing President Trump wanted was a Special Counsel to investigate him. Please explain this logic as it doesnâ€™t make sense.

For a year and a half, when the focus should have been on Hillary and the corruption in the DOJ/FBI, it has been conveniently focused on the Trump administration and Trump friendships/associates. It is interesting that people in the Obama DOJ/FBI are being fired, have resigned or have been referred for prosecution. Nice try at deflection, but the facts keep rolling out and undermining your comments at every turn.

By the way, who is stonewalling the building of the wall? Democrats and RINOs. And even with that, Trump continues to make progress and, by the way, Mexico is building the wall because there are fewer illegals on welfare than there would have been under Hillary.

You are a brain dead frekinâ€™ idiot. You fail to mention that Trump Republican Rosenstein appointed the special prosecutor because Limbaugh and Hannity refuse to allow you to see that. Limbaugh and Hannity want to keep the focus off the current administration and on Obama/Hillary or any Democrat. What dirt does Sessions, another Trump Republican appointee, have on Trump that prevents Trump from firing him?

You are to flat out ignorant and stupid to understand that Hillary, or the members of any previous administration, are not going to be prosecuted by anybody. Why? Because if Sessions/Trump open that door, then as soon as their term is up, the next administration would go after them. Pelosi wanted to prosecute Bush 43â€™, but Obama was smart enough to slam that door shut real fast. But, you are far to stupid, brain dead, and ignorant to comprehend any actual facts.

Comey did what he did for Lynch for one reason. He had Hillary picked as the winnner of the election and wanted to keep his sweet FBI job with the $60 million jet, big salary, benefits, and power. That is truth. But, when Hillary lost, his plans went down the toilet. Comey is an over rated village idiot who only wanted to keep his job. A job for which he was not qualified, in spite of his overwhelming Senate support. Most likely the Senate gave overwhelming support to the Comey confirmation because they knew he was an idiot, who was unlikely to go after members of the congress as FBI director.

By letting people like you vote, a very good legal case probably could be made that election laws are being violated regarding brain dead people voting. I have watched your BS for years. You are one stupid, ignorant, SOB, and you choose to remain so.

So youâ€™re not really following this issue?

Obviously not. Just another anti-Trumper scared of the truth.

Glad to see this on TBE. Us “crazy” treepers over at CTH have been following developments regarding the “insurance policy” and the “small group” for some time now. I don’t comment at CTH, but there is a wealth of info on the site.

CTH has done an amazing job of following the story and explaining the implications. Democrats and RINOs want this to go away and are scared to death of the next shoes to drop. The fear of the â€œswampâ€ is the truth as the foundation of their house of lies is crumbling.