Ever since 1980, even before I could vote, I have been working on GOP campaigns – first as a foot soldier for Reagan/Bush/Wolf in NOVA, and last as a regional field director for Ed Gillespie for Governor in 2017.  And in one way or another, I have been involved in pretty much each campaign for either local, state, or federal office since 1980, either as a foot soldier, a steering committee member, a campaign manager, or a candidate.

For maybe the second time ever, I decided to sit out a campaign, and to watch it from the sidelines and/or blog about the race instead of being an active participant on one team or another.  And that campaign is the race to replace Bob Goodlatte in Virginia’s 6th Congressional District.

I sat out this race for a multitude of reasons.  Among them I am so very impressed with the quality of candidates we have in the race.  Another reason was I a candidate for (and won) a Town Council seat in Strasburg Va. There are other reasons which are my no one else’s business.   As many of you are aware, I have blogged about this race at least twice for TBE – and have watched multiple candidate forums and have spoken personally to 7 of the 8 candidates at length.  And to be honest, it’s difficult for a guy like me who likes being involved in everything to sit out a race. It’s been a fascinating yet bizarre experience. Here is what I have learned in sitting out a race yet being an uncommitted delegate: 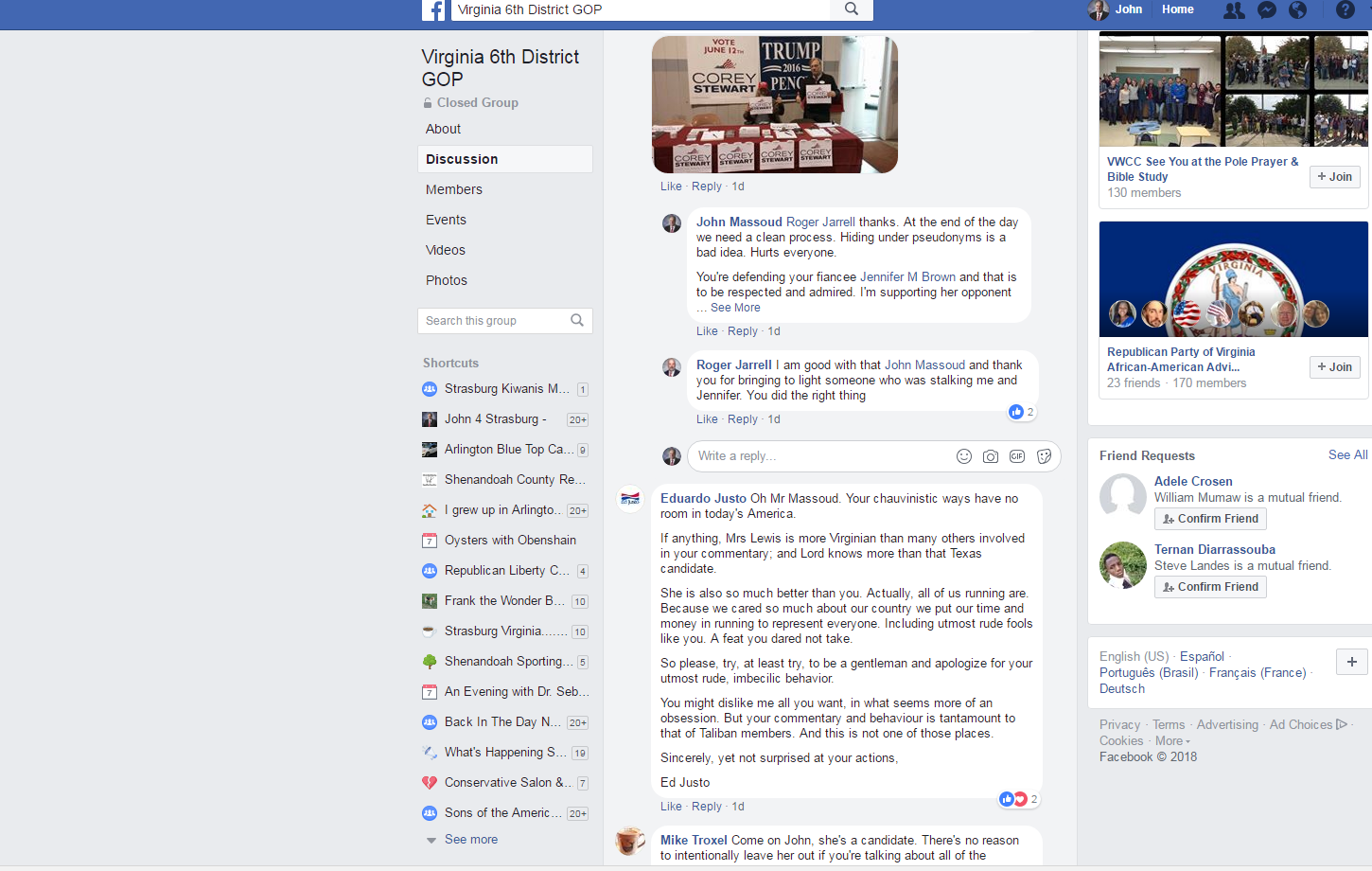 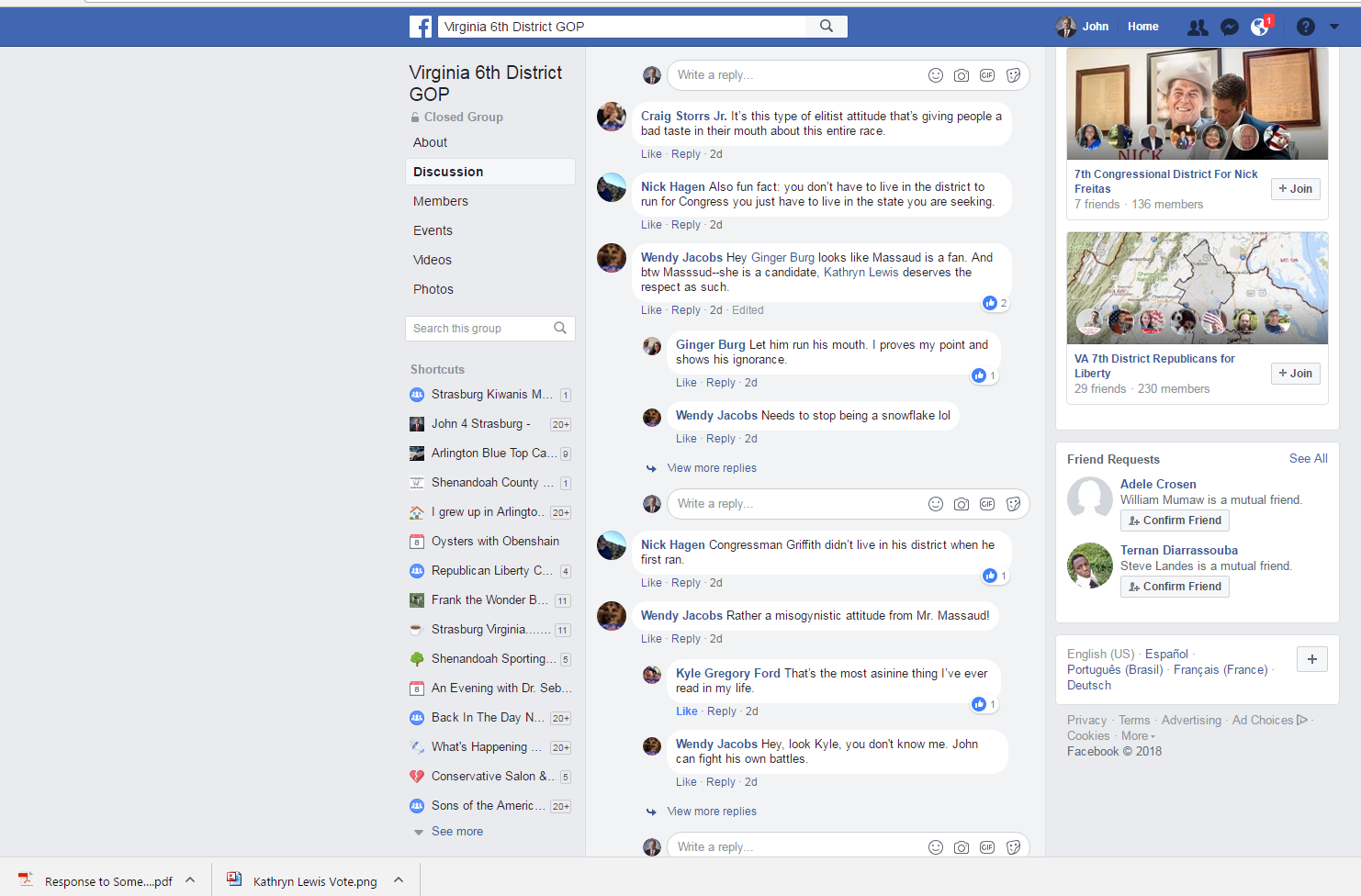 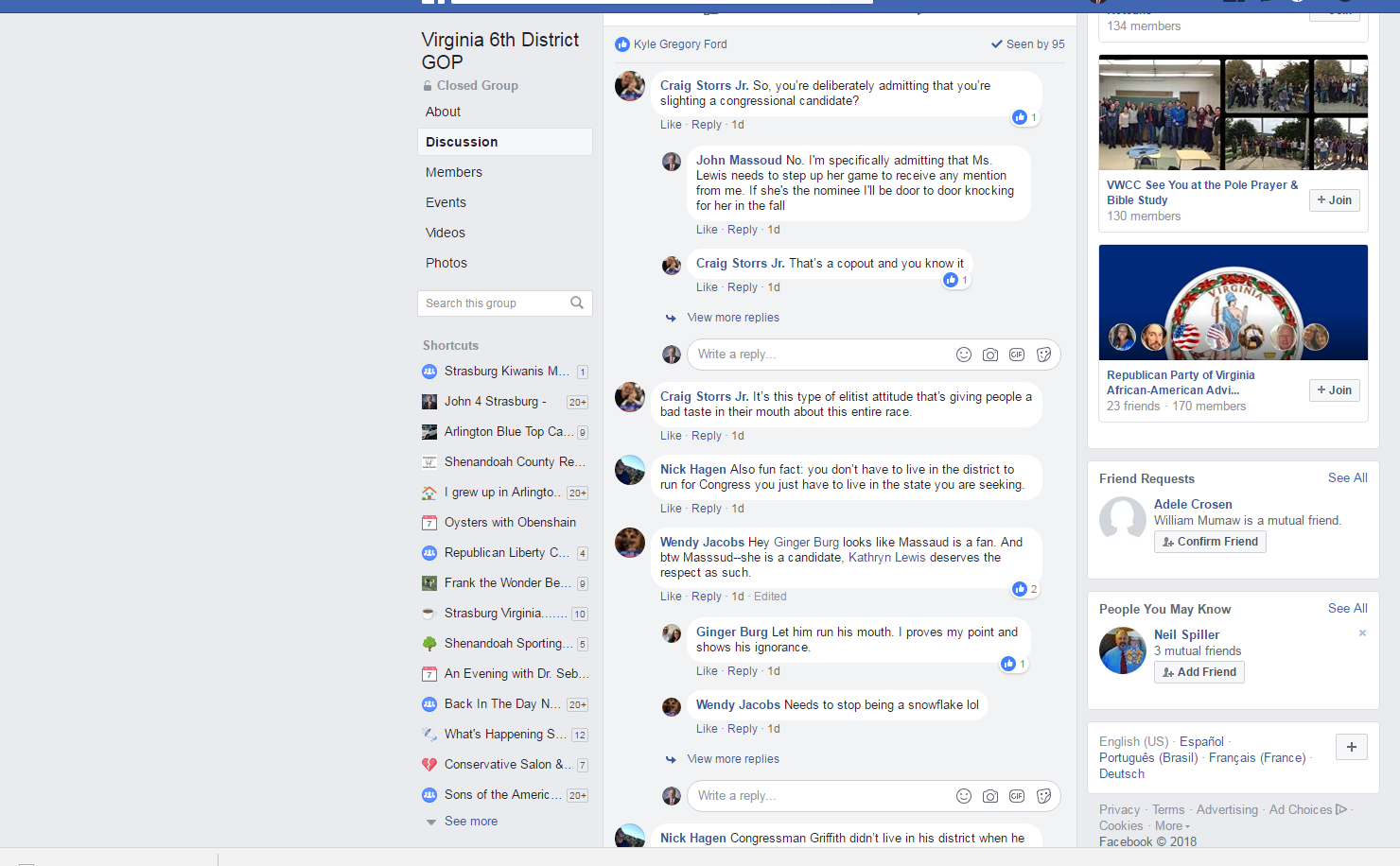 2.The new definition of “establishment”.  According to most dictionaries, establishment means “ruling class” or elite.  However now the term means anyone who disagrees with you on an issue. Calling a fellow conservative a “member of the establishment” or an elitist snob is as stupid as a liberal calling any conservative a racist.  Usually people call others names only when they can’t come up with a better argument as to why their candidate of choice is the better one. Here’s some news for certain online warriors. Cynthia Dunbar is not a monster.  Scott Sayre is not an establishment hack. Ben Cline is a great American and amazing conservative legislator. Chaz Haywood may not be as conservative as Cline or Dunbar, but he’s not a screaming liberal either. Jennifer Brown may not be my 1st choice for District Chair, but she’s an outstanding young lady with a bright future and deserves respect.    And one can declare their support for Desjadon/Pope/Wright/Lewis and be a good person too.

3. The 2nd tier of candidates is as impressive, if not more so, than the 1st tier.  Instead of being out there telling everyone why they should be voting for my preferred candidate, I’ve gotten to know 7 of the 8 Congressional candidates quite well.  And the more I see of all of the candidates, the more I am impressed by Mike Desjadon, Elliot Pope, and Dr. Douglas Wright. Dr. Wright has become an outstanding speaker on the stump and is quite the charming gentleman.  For those who love policy wonks, listen to Mike Desjadon talk about the health care system, and how it needs to be fixed. One can see him sitting in the backrooms of Washington DC cobbling together a deal to put a patient centered replacement of Obama Care into service.  Elliot Pope is just an amazing young man who understands that we need to work on our youth to get them interested in the GOP and the conservative movement, or else we are doomed. Don’t be afraid to take a chance and vote for one of the 2nd tier candidates.   At the very least we need to encourage younger Americans like Kathryn Lewis, Elliot Pope, and Mike Desjadon to run for public office.

4. A reminder that the people working behind the scenes to get their candidates elected are heroes as well.  The work that so many are doing on behalf of their candidates of choice never ceases to amaze me. The staffers and volunteers who can make a positive case for their candidate of choice are the very best of us, and more should take lessons on how to act from their actions.  From Cody Hanshaw to Tyler Adams to Matt Tederick to Anne Fitzgerald to Dianne Wyss and Karen Kwiatkowski and so many more that there is not enough time to mention them all – we don’t have a democracy without the tireless work of each of the campaign staffers. Special shout out to Elizabeth Small of Orkney Springs for all her hard work and always being a class act.

Remember that CD6 is a highly Republican district.  The man or woman who you vote for likely will be the next Congressman/woman from the Valley and Valley region.  Think hard on who you will support, and be sure to go to the convention and support them. I will always tell you to vote for the most conservative person running.  Hope you do. But having been in politics a long time, I must remind you that 7 people will lose on the 19th and one will win.   And the one that will win need our support.  Whoever wins the 8, they will have my 100% support and should have yours also.   Don’t let a loss get you down. Learn from it and do better next time. And don’t let some wannabe online tough guy or know it all dissuade you from voting for the candidate of your choice.  Smile and be strong. See you in Harrisonburg.

The Joys of Being an Unaffiliated Delegate in the 6th Congressional District Race was last modified: May 8th, 2018 by John Massoud

How any delegates are there for this convention and how do they break down by unit?

I have a theory, one that perhaps better explains the 6th and other party follies.

A different theory from a secret contest among GOP leadership to out-crazy the 10th (good luck with that, there is only one Shak)

I believe that we are witnessing a power shift or realignment between two factions of the conservative bandwagon.

I submit that the dominant (dormant) ‘fellowship’ is being transmogrified into one we can call… ‘dominion.’ Watch as chairs are being arranged, hats being traded, and new business cards and titles.

I wonder if more democrats then republicans will vote in the republican primary next month.
Changing the subject. Did a DNA test. Received the results and joined ancestry dot com 2 weeks ago. https://uploads.disquscdn.com/images/9a355d2c489cbe1c059becf9e3261cb8dcf6f69142f5c5a1f341c900fdfd3428.jpg . Having a grand time with that..

That’s why they are doing it. They want to depress the turnout of anyone they can’t confirm is their supporter. That’s why there have been so many smears against Cynthia Dunbar. The other campaigns are scared of her support.

If you want to strike a blow against the negative campaigning, you don’t stay home. You show up and make your voice heard.

Yes, certainly, plus you can always go to conventions to work against will of voters/nominee and then #NEVER support him.

Mick. I get your point. But here’s the weird part. These online tough guys are getting so weird now, they’re going after their own people. Can’t tell you how many people supporting a certain candidate are sick of the name calling from other supporters of their same candidate. Mr. Storrs has been a major instigator here – and so have his online buddies. I can name you multiple Ben Cline supporters that Mr. Storrs has trashed online. And I believe that Mr. Storrs is supporting Ben Cline as well. The Cline people are going to need to sit on Mr. Storrs or else. And Mr. Storrs is not the only one. And it’s not just the Cline supporters. I can name you people from other campaigns as well who are acting like childish you know what’s. I just named Storrs because he and a couple of his buddies thought it would be acceptable to mess with me.

It got really stupid between Team Gillespie and Team Corey last year. But there you kinda knew where everyone’s loyalties lay. I’d keep telling members of Team Gillespie to lay off Corey supporters, but they’d not do so. Which is really stupid – you want people who will work. Not that some of the Stewart supporters were any better – but you get the idea.

In all campaigns you’re going to have partisan nutballs — part and parcel of politics.

I note and enjoy noting the primary players who do not, can not, and/or will not enthusiastically support the nominee. I especially enjoy nudging local Republicans who were foolishly opposite of the always right me.

On the plus side, I did see most all on Team Corey hustling for Ed at the express direction of the Stewart brass with the message ‘there is no way it’s going to be Corey’s fault if Ed does not win.’

Which is why you are our hero. Obviously I need to get a better hero huh?

You are my hero, even if you weren’t chairman of the international cabal that owns and controls TBE.

Ahhh I see that you have been talking to Mr. Justo! Let me guess, if you lived in CD 6, you’d be supporting Eduardo.

Hey, if you want to make it a contest, I’ll see your Eduardo and raise you a shadyshak.com. After the nominations, we can see which District hurts the party more.

You’re not supporting Shak? Why did I think you’d be a Shak Hill kinda guy?

Oh no you din’t . Where is my dueling glove… I shall demand satisfaction!

I never said you were an elitist snob. I said that the attitude that you were exhibiting by determining which candidates were and were not legitimate was “elitist.” I certainly don’t think that you, as a person, are an “elitist snob.” I merely think in this instance, the ignoring of a candidate simply because you didn’t like a performance is an “elitist attitude.” I apologize if I didn’t make the distinction clear.

You may remember that we became at least acquainted when I was Delegate Berg’s legislative assistant in Winchester. During that time I never even thought you were an elitist snob. Just in this instance it is, in my opinion, an elitist attitude.

You absolutely nailed the definition of establishment.

Although I have no idea why, last year Mr. Storrs began harassing me on Facebook. Blocking him solved the problem. I’m not sure what his issue is, but from what you say it sounds like he is becoming a political bully. That’s unfortunate.

Harassing. That’s interesting since I can’t remember anything that would be considered that. Though if you’d like to PM me, I’m more than happy to discuss it.

Yes, commenting on two different “accounts” because I didn’t realize I had already registered one.

No, after that encounter I have no interest in speaking with you. I had hoped you were a decent, likeminded guy from your work with Delegate Berg. But, for some reason, you decided to act like a jerk at that time.

Ok. I’m sorry you feel that way. If you don’t want to accept my attempt to rectify the situation, I understand that.