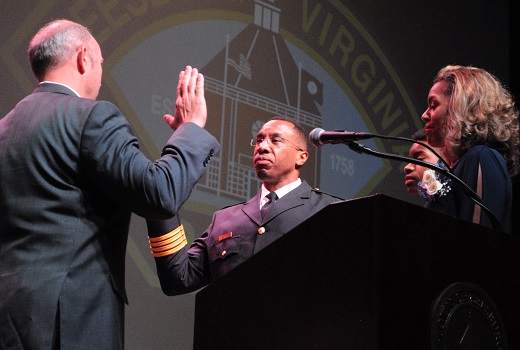 A few recent articles in our local publications gave me a raised eyebrow when I began to lump the situations together.

The first was an article in the LoudounNow dated September 29, 2016 entitled, â€œâ€™Weâ€™re Hiringâ€™: Law Enforcement Agencies Ramp Up Recruiting Effortsâ€ written by Danielle Nadler and Renss Greene. Â The article describes the troubling number of vacancies at the Loudoun County Sheriffâ€™s Office, currently at 48, as well as the number at Leesburg Police Department, which stands at 18.

The second article came the next day in the Loudoun Times Mirror: Â â€œA new day in Leesburg: Brown sworn in as police chief.â€ Â Brown, a former Captain at the Sheriffâ€™s office, has big shoes to fill with the departure of long time Chief Joe Price.

Now, weâ€™ve all read online grumblings in postings from Deputies within the Sheriffâ€™s Office about their dissatisfaction with the current administration. Â After being reelected, Mike Chapman has issued at least five memos shifting deputies around the department, in large numbers, often with no notice to those reassigned. Â Â Typically issued late on a Friday, this practice mirrors the way federal agencies take actions and make announcements they donâ€™t want reported.

I have nothing but admiration and respect for the men and woman of this agency. Your assertion of bias is a gratuitous assertion and therefore rejected without merit.

Ok Greg. I retract that statement. Let’s work together to give both the Leesburg Police and the Loudoun County Sheriff all of our support! We need to fill the ranks with top individuals who can keep this county safe and unified! I applaud ALL who risk their lives for our safety, and thank you in advance for your help in recruiting the finest for this important task! God Bless Loudoun County and Leesburg Police Officers!!!

This article has no basis and Greg Stone obviously has his own bias against the LCSO! Sheriff Mike Chapman does an exemplary job and I will personally apply to work with him! Mike has Integrity and ALWAYS maintains an efficient system of placement for the Deputies under his command!

Obviously there will be those that second guess the Sheriff, but his impeccable record of Law and Order speaks for itself!