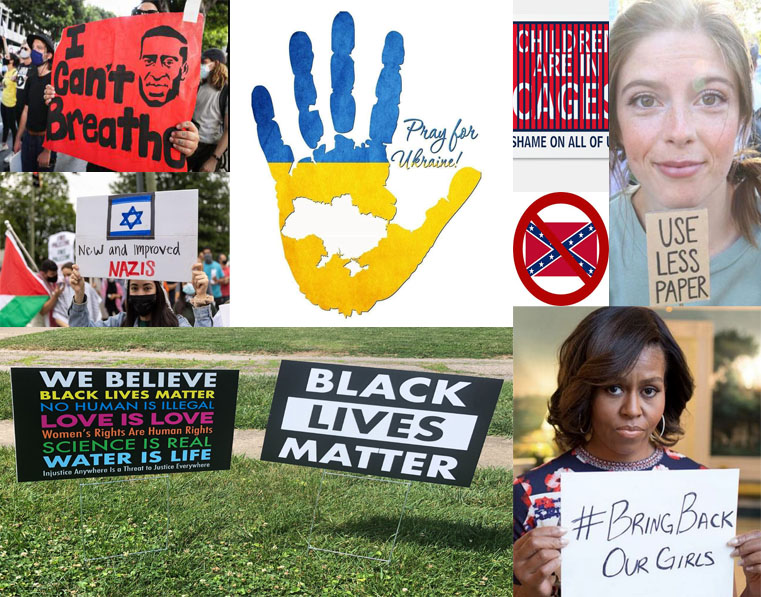 The Left has knee jerk compassion for whatever cause makes them touchy-feely. Ukraine joins the list

The Left and Right unite for Ukraine against Russian aggression

We should really appreciate the worldâ€™s unity in opposing Vladimir Putinâ€™s invasion of Ukraine, and glad it has temporarily united the Left and Right in this country â€“ although, thereâ€™s plenty of finger pointing going on in the blogosphere and social media.

I believe Putin miscalculated how the democracies of the world would be so united against Russian military aggression and how it would solidify the Ukrainian people to fight (although reports indicate some 500,000 in this nation of 44 million have fled to other nations).  Airbnb is picking up the slack by offering its hosts to refugees

How can any human not show any compassion when we see video of children crying, reports of 16 kids dead, and other innocent lives lost?

Even liberal Sean Penn is in Kyiv to do a documentary to dramatize the great brave Ukrainians and pump up support for more U.S. military actionÂ

And, we see in Ukrainians ourselves â€“ a European country fighting for its independence and freedom from a would-be dictator.

However, the cynic in me finds irony about how the American Left has come to post all these â€œPray for Ukraineâ€ and yellow and blue flags on their Facebook pages.Â  I donâ€™t think many understand this countryâ€™s past.

Liberal mobs stormed through Richmond and other cities the last two years defacing and tearing down monuments to Confederate generals and Christopher Columbus.  Even statutes of Thomas Jefferson and Abraham Lincoln were not spared in other cities.  Democrat politicians in Virginia and other states didnâ€™t say boo.

It seems anyone who owned slaves, even for a hot minute like the Declaration signer John Witherspoon in my hometown of Princeton, NJ, was destined to have their name removed from a school. Itâ€™s now Princeton Middle School.

Ukraine, if you didnâ€™t know, has erected monuments to a number of nationalist leaders, who, unlike Confederate generals, committed genocidal acts against Jews, and also Poles and other minorities.Â  A few of their faces are on the currency.Â  You can read about Bohdan Khmelnytsky here and Stepan Bandera hereÂ .

My guess is that Putin, in his madness, thought that some peoples would remember Ukrainian complicity with the Nazis (whom they viewed as liberators from Stalin), and respond favorably to his neo Nazi charges against Ukraineâ€™s leadershipÂ

I guess Vlad forgot that todayâ€™s Left has a double standard when regarding the oppression of Jews vs. â€œbrown people.â€ Â  The woke who control academia, the media and Hollywood also rejoiced when communism fell in Eastern Europe – -although they fought President Reaganâ€™s nuclear buildup in the 1980s which pushed the Soviet Union over the edge.

Of course, Ukraine has turned the corner.Â  Its president, Vlodomyr Zelensky, a Jew, is a hero for his resolve.Â  Ukraineâ€™s Jews live peacefully and frankly, face fewer anti-Semitic acts than Jews in France.Â  So, as a Jew (whose grandmother was born in Odessa but filedÂ  with her family to America) I forgive, and Israel is backing Zelensky Â

But the American South has turned the corner on segregation and slavery of blacks, but its monuments, buildings and streets named for Confederates are being erased by Leftist revisionist â€œcancel culture.â€Â Folks who descended from Confederate veterans or slave owners, who have no ounce of racism in their blood, are fearful of speaking up.Â  Italian Americans who helped erect Columbus statues are silent in face of the Leftist mobs.

In addition, itâ€™s funny seeing liberals look the other way at Ukraineâ€™s government arming its citizens.  Their national legislature the day after the invasion allowed citizens to have not just any old handgun, but semi-automatic rifles.  Open carry in Ukraine is now legal!  Interesting that the Left whines about Americans owning guns, especially after a mass shooting, ignoring the fact the purpose of the 2nd amendment was not to protect you from criminals, but tyrants and foreign invaders.

In addition, itâ€™s amusing to see liberals wrap themselves around the â€œdemocracy flagâ€ when it suits their own political interests â€“ i.e., the January 6 â€œrebellionâ€™ by â€œwhite supremacist Trump supporters,â€ but turns a deaf ear to complaints about cancel culture and the stifling of free speech, and excessive expansion of government under Biden.

One thing I do doubt â€“ Democrats will take no ownership over how their anti-fossil fuel policies facilitated this crisis, and same goes for Europe kowtowing to the radical environmentalists by closing nuclear power plants â€“ thus making countries, notably Germany. more dependent on Russia for natural gas

Finally, I really do not believe Democrats have any fire in their belly to send troops into combat or escalate this matter.Â  Liberals like Nancy Pelosi have equated the late February invasion as â€œPutinâ€™s Sudetenlandâ€ â€“ a reference to Hitler demanding the heavily German-speaking area of the former Czechoslovakia be brought into the Third Reich in 1939.Â  You can’t on the one hand make the 1939 comparison without backing it up with boots on the ground, can you?

However, we need to welcome liberals to the pro-democracy, pro-free speech, pro-gun ownership fold and can only hope they will stay consistent for liberty.  I hope this is not just a fad or phase like: â€œBring back our Girlsâ€ in Nigeria.  Boko Haran, which kidnapped those kids, is still around committing acts of terror.

The Left and Right unite for Ukraine against Russian aggression was last modified: February 28th, 2022 by Guest Contributor Ken Reid

Ukraine will be dead by the weekend because the West has become too woke to care about reality.

David, You know that you can sign up to go fight there right nowâ€¦ you know that, rightâ€¦?? You and your AK can go play Rambo to your heartâ€™s contentâ€¦. I strongly encourage you to do just that!!

Another soy-boy commenting from his mama’s basement telling others they need to man up or shut up. By the time I could fly to Poland and walk to Ukraine with my AR, they will all be eating Russian caviar. Eric, I enlisted at 17 and was in a war at 19. I later became an officer, airborne, etc. I did read about the foreign legion they are putting together and fantasized about it for a few minutes because, in actuality, my military specialty was interrogating Russians. However, Russians were in short supply and I ended up interrogating Iraqis, although one did speak some Russian and had spent time training in Russia. I’ve done other interesting things too. What has been your contribution? How many lattes have you consumed to keep the American economy functioning?

Excuses are like Democrats; everyone knows one and they all stink. What Russia is doing to Ukraine, the Republicans will do to Democrats in November, Eric. I look forward to your annihilation.

Both Democrat and GOP administrations enabled this to happen. The fact it’s happening post- trump, post-Olympics and when oil prices are skyrocketing is interesting, to say the least. But the only point of my article is how liberals allow their emotions to overtake reason when the underdog is attacked. Doesnt matter who the underdog is — it can be a drug addicted thug like George Floyd (now statues are erected to him) or a country that epitomizes “whiteness” and erects monuments to fascists who murdered Poles, Jews and other ethnic minorities. And, lately, CNN reports Ukrainian citizens (white) are given priority for leaving the country over African guest workers (black). So, all it takes is for Al Sharpton or some loudmouth activist to blow the whistle on this one and it will put the Democrats in a quandry. Again, I am happy we are united against Putin, but I seriously doubt Republicans or Democrats in Congress, nor the NATO leaders, want to put their soldiers and sailors in harm’s way and escalate this conflict. So, all the sympathy for Ukraine is just that — like what Obama did with Boko Haran (Bring back Our Girls).

Welcome democrats, they are a bigger enemy than Putin!

Not surprised a Putin supporter feels that way, Jonathanâ€¦

Democrats are a greater enemy that Putin because Democrats are destroying the USA from the inside. It is my hope that after November’s overwhelming Republican victory that we recognize how harmful the Democrat Party is and actively work to dismantle it completely.