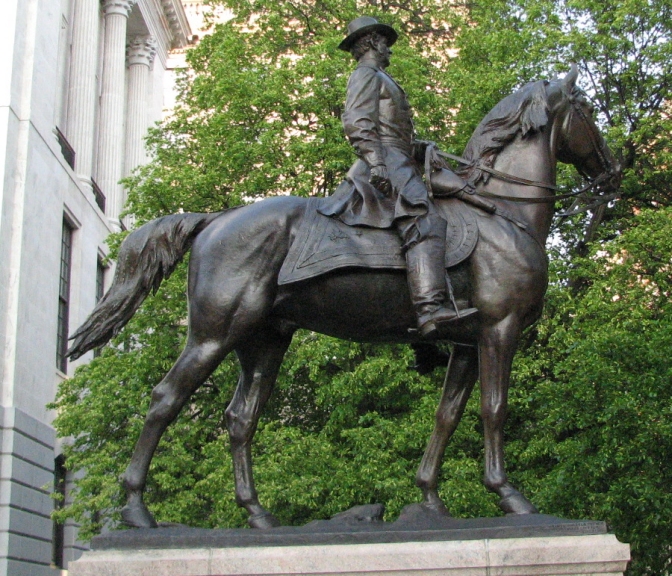 Just when we think that the modern day PC crowd cannot become any more stupid, they reach a new low.  See Massachusetts State Rep Michelle Dubois, who wants a statue of Union Major General Joseph Hooker removed from the Massachusetts State House because his last name is offensive to her and to women.

Most of history only knows about Joe Hooker from his mismanagement of the Battle of Chancellorsville, however Hooker was and should be considered a Union hero.  Hooker had been the great-grandson of a Revolutionary War Captain from Massachusetts, and had been a hero in the Mexican War of 1848, being “brevetted” three different times (meaning he received 3 honorary promotions – something which did not happen a lot in the minuscule pre Civil War US Army.  After retiring from the Regular US Army before the War, Hooker applied and was commissioned as a Brigadier General in the US Army, and was known as one of the Union’s finest fighting generals. When the US Army was being led by such incompetents as McClellan “who was known to have a permanent case of the slows” and John Pope, who miraculously lost an entire Confederate army during the 2nd Manassas campaign, Major General Hooker was being noticed for combat aggressiveness and being one of the best fighters of the Army of the Potomac.  Most students of the Civil War agree that if Hooker had not been wounded at the Battle of Sharpsburg, the Union might have won the battle and that would have been the end of the Army of Northern Virginia.

Hooker badly lost Chancellorsville, partly because of the stupidity of some of his subordinates, partly because he lost his confidence in his own generalship, and partly because of a head wound suffered on the final day of the battle.  If he had not suffered the head wound (likely a major concussion), odds are that Chancellorsville would not have been the great victory that it was. After performing horribly on the 1st day of the battle (not requiring the 11th Corps to fortify and totally misreading Lee’s intentions), Hooker had regained his fighting spirit the next day and was showing good generalship until a cannonball exploded near him on the 3rd day of the battle.  It was only after receiving this wound that Hooker became “shell shocked” and pulled his army back across the river against the advice of his generals.

Joe Hooker was an alcoholic and a schemer.  And his generalship at Chancellorsville was subpar by any standards.   But he also led the honor guard at President Lincoln’s funeral procession, meaning that he could not have been that horrible a general and had some popularity.  But let us talk about the Joe Hooker which Ms. DuBois should be taught about.

In a time when most of the Union brass did not want to fight the Civil War based on the abolition of slavery, Joe Hooker was an abolitionist who believed that the end of slavery should be an important part of waging the war, and was very supportive of Radical Republicans like Thaddeus Stevens. So the PC crowd like Ms. DuBois wants to remove the statue of a freedom fighter, a man who risked his life for the abolition of slavery and who was wounded multiple times on the battlefield and in service to his country.

How long must we wait for Ms. DuBois to call for the removal of any statue honoring Bill Clinton because he raped multiple women?

The Left Reaches a New Low – Banning Statues of Abolitionist Heroes Based On Their Name was last modified: March 19th, 2018 by John Massoud

Can we have a statue named Alotta Fagina?

Ophelia Rass is a real name.

Can we start erecting statutes of school resource officers who take down threats to our childeren?

The actual substance of the topic is ridiculous enough without your exaggerations.

Not a statue
Not a banning

Considering the amount of criticism “their media” is given for this kind of crap, it may behoove you to not do likewise.

Like AA though, I always appreciate a history lesson.

John,
I like the history that you remind us all of.
Great job!

Not to bust factual on you, but I’m not so sure the Madame Dubois called to tear down any statues. I think it was more like (paraphrasing here) “why don’t we add the cat’s first name so the sign in front of my office doesn’t say Hooker entrance?”

I hope I didn’t ruin your moment- who doesn’t love ragging on worthless legislators?