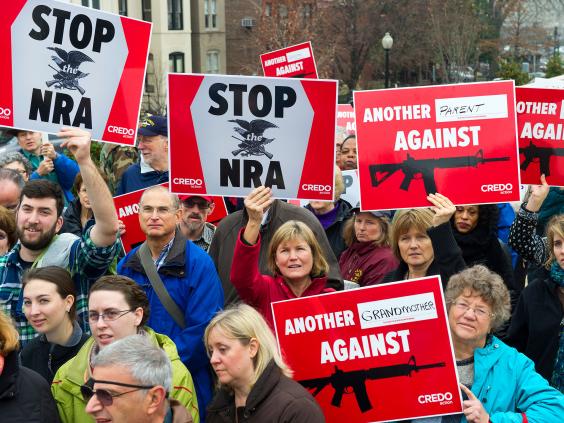 The Left’s Dirty Secret about School-shootings

The leftist/media blitz following the horrible mass-shooting at Marjory Stoneman Douglas High School in Parkland, Florida, has perhaps inadvertently let slip the dirtiest of dirty secrets about the political Left’s true objectives vis-à-vis the Constitution and American citizens’ right to be secure in their own persons and property. That dirty secret is this:

I fully expect to be denounced and pilloried from the left side of the political spectrum over that statement – much like the drubbing I got when I wrote about militant homosexuals’ war on the Boy Scouts a few years ago. [1]

Why would I say such a mean thing about a political faction whose adherents always claim that they want only “the best” for America? When we examine the evidence, I think it will become obvious why I make this claim.

Let’s start with the issue of the totally defenseless schools. As we all know, anyone can walk into almost any American public school-building, or onto the campus of any private school, without obstacle or challenge of any kind – no locked doors, no security-checkpoints, no guards. As we have learned from numerous terrible events, there is usually nothing or no one to stop an armed intruder from entering a school building and shooting down dozens or even scores of students.

Why that is so is mysterious to me. Shouldn’t a school be at least as secure from intrusion as the average business or government building? Why do schools have uncontrolled entrances? Indeed, why do they have so many entrances? Things being the way they are, wouldn’t it be prudent to keep all doors locked except the main entrances, which are guarded by armed security personnel?

Amazingly, this entirely sensible (and rather simple) security-measure is being debated – and often rejected – on grounds of cost. Reformed budget-hawks – including many who spend like drunken sailors on crack-brained educational “innovations” – are actually arguing that security-guards would be too expensive. Others say armed guards would disrupt the “academic atmosphere” of schools and make them into “armed camps.” (Does that precious atmosphere remain intact when armed villains roam the halls, shooting students down like rats in a corncrib?)

I don’t know whether to laugh or cry over this kind of idiotic thinking. Dirty Harry famously asked: “Do you feel lucky?” Clearly, many educators – mostly leftists – feel “lucky” enough to oppose even the easiest-to-implement measures that would stop the shootings. 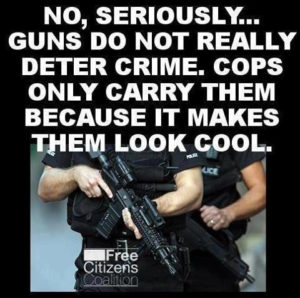 Next, consider the hysterical reactions to the reasonable idea of arming some school-staff so killers would not enjoy an unimpeded field of fire. Some of the objections might lead one to conclude that liberals consider teachers more dangerous than the odd murderer who drops in unannounced. One politician said a tearful first-grade teacher told him she didn’t want a gun. Others wailed that students might get hold of a teacher’s gun. Still other (truly unhinged) critics said a teacher might “go postal” and start wasting students and shoot up the teachers’ lounge. (Would that be a problem?) Really, could we get serious here?

In fact, no one has suggested that all teachers be armed. That would be absurd. But in most schools at least a couple of teachers or staff would be comfortable with arms and experienced in their use. Some might be military veterans or have had police-experience. Many Americans – even teachers – are also hunters. All armed staff would be volunteers, all would have thorough background-checks, and all would undergo police-training on how to oppose an armed perp in a crowded place. No one would simply be given a weapon.

Identities of armed staff would be a closely guarded secret known only to school officials, police and other members of the armed cadre. To prevent leaks which could endanger the school, unarmed staff – particularly if they oppose staff-arming – should not know.

In schools which lack volunteers, that fact should not be disclosed or publicized, as it would re-brand the school as a “gun-free zone.” That designation should henceforth be banned, by law. Experience has shown that just the assumption that someone might be armed – even when no one actually is – can deter crime. Most would-be Dillingers want easy marks, not the OK Corral. Statistics show that crime decreases when crooks think grandma might be packin’ a piece.

In 1950s Kenya, the Mau Mau terror had that British Colony in turmoil. To combat it, Kenya’s governors implemented a measure we would think radical today. Because Mau Mau violence mainly targeted whites who held government and business posts, the new law required every white adult – including men and women of every age – to carry a loaded weapon at all times. Police could ask any person to produce his/her weapon. Non-compliance resulted in a fine. With the regulation in force, the Mau Mau terror simply faded away. The game was no longer worth the candle. A people wise in the ways of war took necessary action when the enemy was at hand.

At this writing, all the sensible measures that would “harden” schools against further attacks have been rejected by leftists and media (is that redundant?) who demand more gun-control laws. But in a country of 3.8 million square miles, whose 300 million people already have 300 million firearms, would more laws banning certain kinds of guns – or even all guns! – prevent a person of evil intent from obtaining a firearm and committing some heinous act? Al Capone would have loved this, but the rest of us should be skeptical.

Australia’s recent experience with gun-laws is instructive. After all “registered” guns were outlawed and confiscated in 2014, the crime-rate shot up. Police report that armed robbery went up by 40%. In Victoria, homicides increased 300%. There is no word on whether citizens are pleased with the law’s results, but criminals are reportedly “ecstatic.” (Just kidding about ecstatic criminals, but the situation is no joke to Australians.)

The law’s inability to prevent mass-shootings was again demonstrated by failure, at several official levels, to register disturbed teen Jacob Cruz in a national database of people ineligible to buy a gun. Laws are worthless if responsible agencies don’t enforce them – and even more so when the law affects only people least likely to commit a crime. More gun-laws will not stop school-shootings. And while we’re at it, how about describing people correctly? Jacob Cruz might once have been a “troubled teen.” But now he is an accused murderer of seventeen people.

So if leftists don’t want to stop school-shootings – as their actions indicate – the logical question is: why not? Obviously, because they want something else. Only Americans acquainted with 20th century socialism will recognize that leftists’ real objective here is not stopping school-killings, but disarming the people so repressive socialist government can be established.

Younger people might think this is ridiculous, but the historical record is clear: Confiscating private arms preceded all the commie-takeovers in Russia, Germany, Poland, China, Hungary, North Korea, Cuba and Vietnam. Leftists know that an armed people will never accept full-blown socialism. Eliminating our Second Amendment is their key to getting control of the USA. To get the guns, leftists’ typical first step is creation of a societal environment so chaotic that people fear for their safety and become receptive to disarmament. Repeated, seemingly unstoppable school-massacres advance that aim. (C.f., Rahm Emanuel: never let a good crisis go to waste.)

And a logical second step is demonization and financial destruction of political factions or organizations that defend Second Amendment rights. Today we’re seeing that step play out in the hysterical media-attacks on the National Rifle Association – a patriotic defender of Second Amendment rights since the 1880s founded, in part, to help blacks defend themselves from KKK-oppression. The NRA also called on Americans to donate firearms to help the British people defend against an expected Nazi-invasion in 1940. Now we have ignorant school-children – who wouldn’t know Nazis from Nicaraguans – standing before TV cameras accusing the NRA of “killing children.” Is this what schools are teaching now? Wonderful! (My pop used to say, “It’s not funny enough to laugh at, but we’re too big to cry…”)

As I post this piece, eighteen businesses that I know of have been spooked into cutting business-ties with the NRA. [2] Most had offered discounts to NRA members; some had credit-card deals with the NRA; and others were simply donors. Leftists cheer these divestments, but there have been some unanticipated repercussions. Delta Airlines’ corporate headquarters and primary air-hub are in Atlanta. Their cancellation of discounts for NRA members has prompted some Georgia-legislators to threaten repeal of state tax-breaks on fuel previously given to Delta. Loss of that tax-break would cost the company tens of millions of dollars.

The media’s anti-gun crusade has also caused a spike in the NRA’s membership. Clear-minded citizens not aligned with the left’s gun-free objectives understand that the NRA did not cause the Parkland massacre. They see no reason to punish an organization which has done much good for the country over the past 130 years.

I don’t fancy myself a business-expert, but after a 40-year career I do know a few things. One of these – perhaps the most important – is that a business must stay focused on its mission, and never take a political stance that offends a significant part of its customer-base. That can be a fatal embrace. An old boss liked to say, “When things are going well, don’t start doing dumb stuff…” Delta was doing fine. Bashing the NRA was (as General Longstreet said of Gettysburg) “ground of no value.”

“The business of business is business…” was a hallowed statement of yore. It means that a business exists to deliver the best possible product to its customers, and earn profits for investors and owners. And incidentally (but not trivially), a business furnishes useful employment and income for its employees. It can’t do any of these useful things if it isn’t successful. Mixing a business in politics seldom turns out well – even when the involvement looks like a sure win. As they say, “[stuff] can happen” – recalling the recent, lamentable crash of the Great Airship Hillary.

We’ll have a deuce of a fight over guns, laws and schools before we figure out how to protect ourselves. Hopefully we have enough leaders who understand the problem and possess the will to implement solutions that protect Americans and preserve their precious freedoms. There are serious stakes here. It’s no time to “go wobbly.” 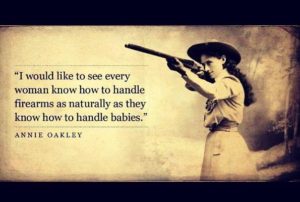 [2] Businesses that have discontinued commercial arrangements with the NRA: