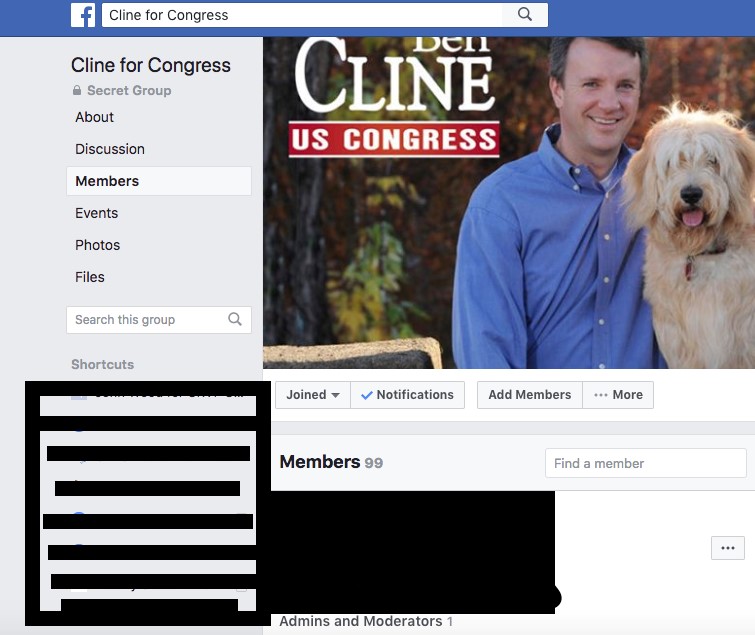 The loudest mouths in the 6th District are wrong: An opinion from a quiet observer

As I was preparing to take over as Chairman of my College Republicans chapter I was advised by several people I hold in high regard that it would be difficult to remain neutral as a CR chair and provide the most unbiased platform for campaigns if I was directly involved with a campaign. I took that to heart. I did not want my affiliations to become a roadblock to other CR’s in their search for a place within campaigns and the party infrastructure. While serving as CR Chairman I have not taken any paid political jobs. I even took it a step further and refused to make endorsements of any candidates until they received the official Republican Party nomination.

What I did do was keep my head down and lead my College Republican chapter to make nearly 100,000 voter contacts including knocking on roughly 30,000 doors in the fall.

I was raised with the belief that we are made with two ears and one mouth for a reason and for the last year I have rarely used my mouth. I have sat quietly and listened but now it is time to discuss some of the things I have encountered and to set the record straight on what has become a convoluted disaster of a Congressional race.

The sixth district convention is just a few short weeks away. As delegates, we will be called on to decide who will represent our Party for Congress in November, but there are people involved who are doing everything they can to make sure we stay at home.

They would have us believe there is some conspiracy between the district leadership and the Dunbar campaign to rig the convention. They have told us the committee has made decisions in favor of one campaign over the others.

These are just talking points and are simply not true.

The reality is that there have been numerous attempts to mislead delegates about Cynthia Dunbar. In fact most of these attacks have been personal attacks on her in an attempt to convince us to vote for anyone but Dunbar.

They have sent out fake emails, planted stories under fake names, and made up vicious lies about Cynthia Dunbar, her family, and her campaign.

Their actions have not been in response to a rigged party process but are rather a well-orchestrated smear campaign intended to tear down a candidate they see as a threat. They see Cynthia as a threat because she is bringing in new people to participate in party processes and they are finding it difficult to exert control over you.

The conduct of various members of these campaigns is beyond hard-ball politics. The most glaring example of this is a recent comment by Cline supporter and writer for Bearing Drift, Matt Colt Hall, on the John Frederick’s show talking about Cynthia Dunbar and her supporters. On April 27th, while talking about the 6th convention, Mr. Hall referred to Cynthia’s supporters as “narrow-minded, far-right wing, church groups.” Listen for yourself.

Mr. Hall’s comments are no different than Obama’s remark that “Christians cling to their guns and their Bible,” or Hillary Clinton’s infamous “basket of deplorables” insult.

In the heart of the 6th District is Liberty University where I and thousands of other “narrow-minded Christians” work every day to incorporate the Gospel into our professions. It seems Mr. Hall holds the opinion that church people have no place in the political process. Mr. Hall is directly affiliated with the Ben Cline campaign and if Mr. Cline does not share Mr. Hall’s thoughts about the delegates then why does he not condemn these comments from one of his own campaign members? If this is how the Cline campaign feels about me, then I want no part of it. It seems like they forgot that the final tenant in the Republican Creed is “That faith in God, as recognized by our Founding Fathers is essential to the moral fiber of the nation”.

Of course here is where the Cline campaign will tell you that Mr. Hall is “not on their payroll” and that “they cannot be responsible for everything their supporters say”. Sound reasonable? It might, if Matt Hall and others like Ginger Burg were not part of the “Ben Cline Nerve Center,” a private Facebook group used to “coordinate digital (and sometimes real world) efforts.”  According to Cline’s paid staffer and campaign advisor, Zach Werrell, this group is only for “key supporters” for “organizing our efforts and controlling the narrative on social media.” 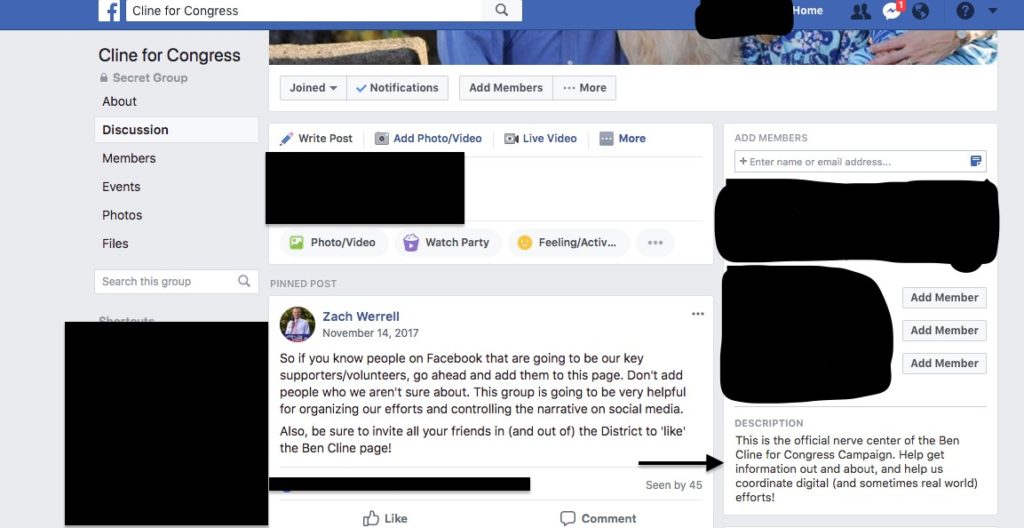 Here is a screenshot showing Matt Hall as a member of this private, ‘nerve center’ for the Cline Campaign: 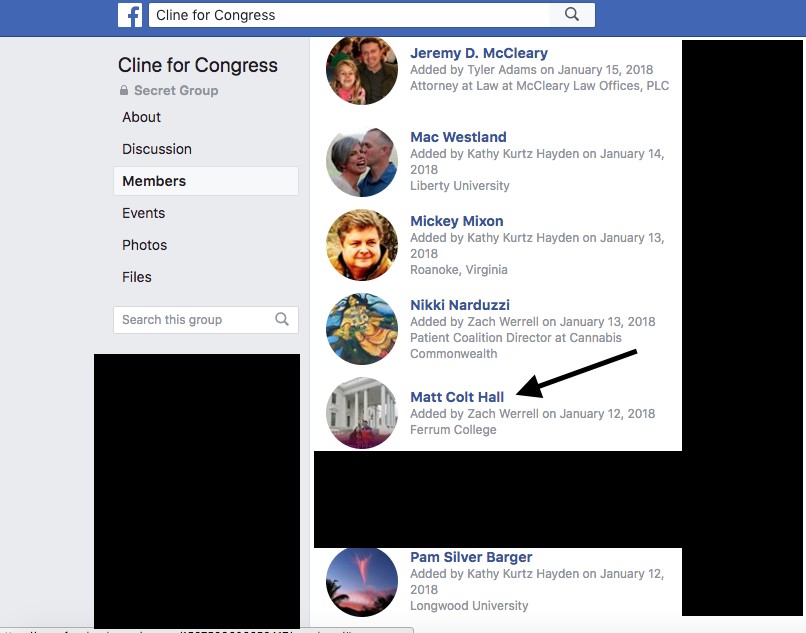 Here is another shot showing Ginger Burg, known for posting nasty attacks against Cynthia Dunbar, as a member of the ‘nerve center.’ 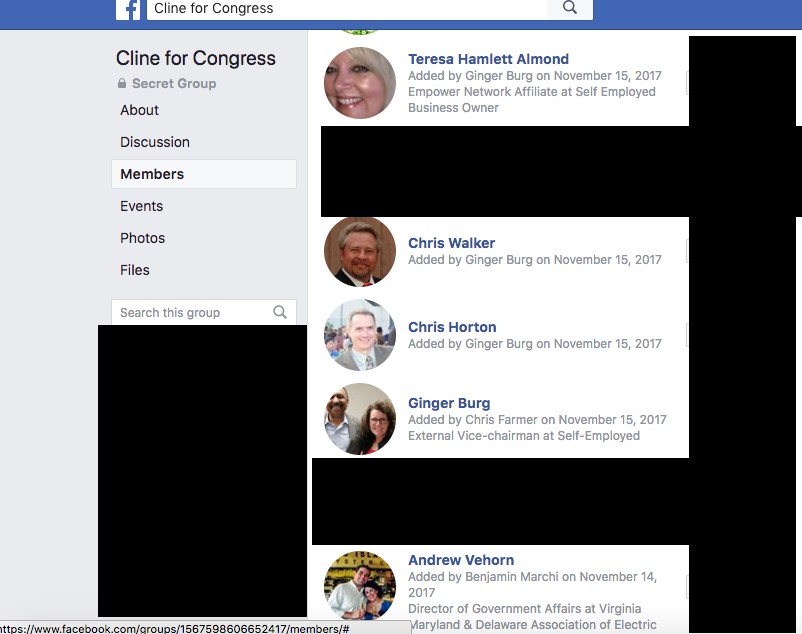 Sounds like they’re pretty close to the campaign to me.  In fact members of the “Cline nerve center” have been instructed by Zack to get out on social media and “smash Sayre and Dunbar” and that’s exactly what their campaign has attempted to do. 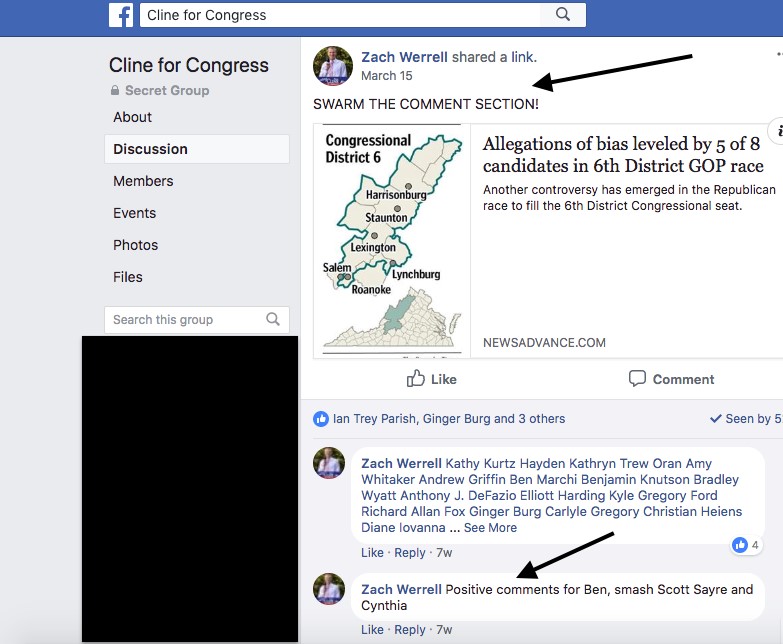 The Cline campaign should be condemning the actions by its members such as Ginger Berg and Matt Hall, and the instruction of coordinated attacks on Cynthia Dunbar. After all, Mr. CLINE HIMSELF IS A MEMBER of this “nerve center” and has direct access to the comments shared there, along with some other notable individuals such as Tim Phillips (Pres. – Americans for Prosperity), the Rev. Ben Knotts, Mark Lloyd, Nick Collette, Graven Craig, Steve Mullins, Kathy Hayden, Izzy Knight, Christian Heiens, Andrew Vehorn, and Kyle Ford. (Additional screenshots showing these names are available – but left out to preserve space). 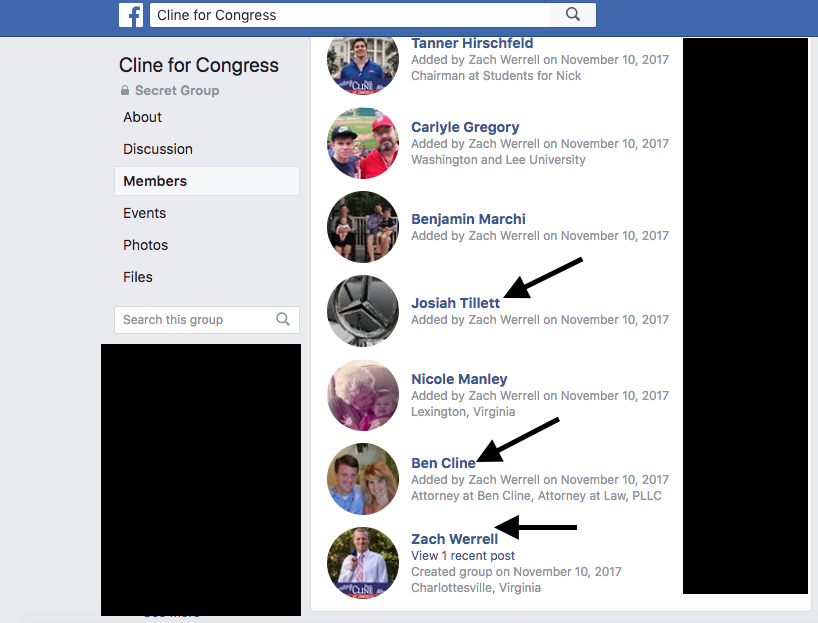 It really shouldn’t be a surprise that we have a hard time growing the party when this is what people are met with when they get involved with local Republican politics. Many of you who have signed up as a delegate for this convention are participating in a party function for the first time. To you I want to apologize for this being your inaugural experience. Republicans should be about robust but honest debate.

Our field for the election has an amazing amount of diversity in both experience and ideas for solutions. Unfortunately, the ugliness that has grown out of places like this Facebook group has overshadowed honest differences and has stunted useful debate. I have been shocked on more than a few occasions when individuals have lashed out at me for having a different opinion on issues like the structure of the convention or had a different opinion on a candidate. These are people who I count as friends and out of respect for them I will not mention their names because I have no desire to attack them. There has been enough attacks thus far and if Virginia Republicans are to succeed in winning our Congressional races and Senate race this year and to regain what we have lost we must come together and denounce this type of gutter tactics.

Thankfully, there is at least one campaign who has not participated in this mudslinging and personal attacks. Given that and the strength of her message and character I will NOW be supporting and endorsing CYNTHIA DUNBAR FOR CONGRESS.

For Mrs. Dunbar’s part she released a campaign pledge months ago to run a clean campaign and asked the other campaigns to join her in signing it.  Sadly there were no takers.

It’s time to raise the standard, stop the mudslinging and name calling for personal gain and take back our district for the people.

Thanks for your time and God bless.

I am John Wood.

The loudest mouths in the 6th District are wrong: An opinion from a quiet observer was last modified: May 9th, 2018 by Guest Contributor John Wood
6th district conventionBen ClineCynthia Dunbar
58 comments