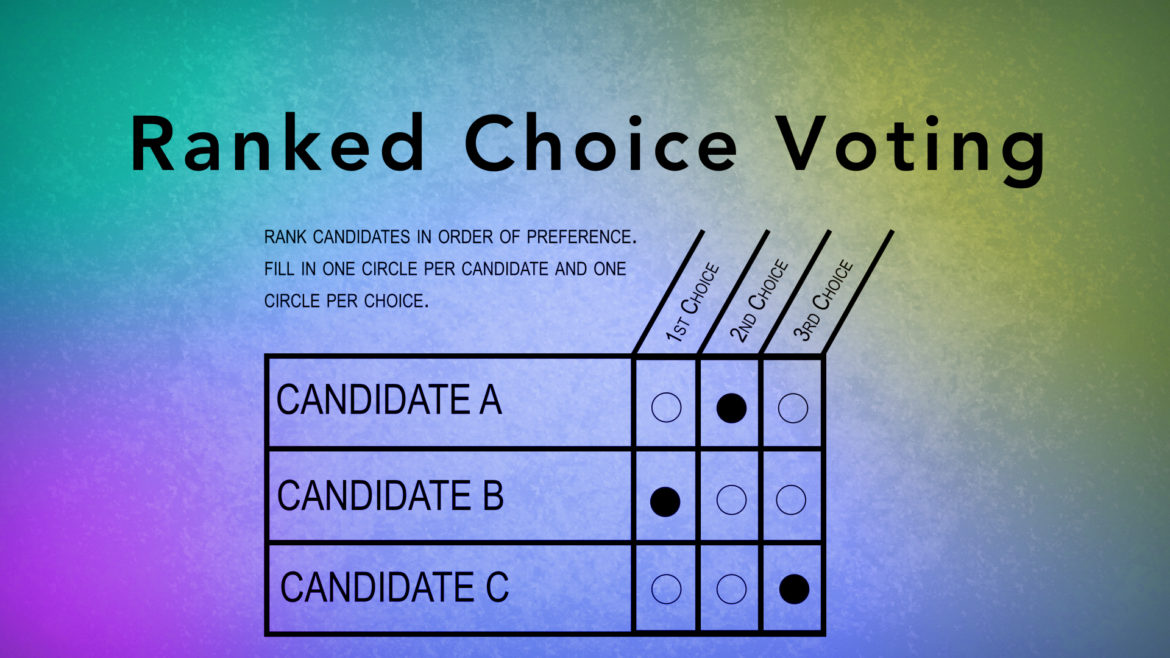 Ranked Choice Voting, or Instant Run-Off Voting, is by far the most superior method of electing representatives available in the United States – and yet, I never hear about it. Why?

What Is Ranked Choice Voting (RCV)?

Ranked Choice Voting allows voters to rank their candidate choices from first to worst. Imagine, no more voting for candidates that are your second or third choices just to prevent someone far worse from gaining a nomination or winning. Think what this could have meant to E.W. Jackson who shared supporters with Delegate Nick Freitas and Supervisor Corey Stewart. Everyone that wanted E.W. Jackson could have ranked him number one with either Corey Stewart or Nick Freitas number two. No one would have had to vote against anyone. Everyone could have walked away from the polls happy.

How Does It Work?

For a single office, like for a mayor or governor, RCV helps to elect a candidate more reflective of a majority of voters in a single election even when several viable candidates are in the race. It does this by counting the votes in rounds:

The greatest benefits of this system are that, instantly, the candidate with the broadest support wins, everyone gets to vote for their favorite candidate, and there is no time-consuming and expensive run-off elections.

Imagine how much more interesting the Republican Primary process in 2016 would have been if we could have ranked our candidates from first to worst in every state, utilizing instant run-offs to determine a single winner in every state. The results may not have been different, but I think you would have seen a great deal more candidates able to remain in the race after Iowa and New Hampshire.

RCV or Instant Runoff Voting (IRV) is the most “republican” manner for selecting our candidates. In fact, RCV/IRV would make conventions a triviality.

While Constitutional Amendments would be necessary for using RCV/IRV for statewide and national general elections, imagine just how many problems this would solve! If you really do favor the Libertarian candidate over the Republican candidate, you could vote Libertarian without any guilty knowledge of having “really voted for the Democrat”.

Not only would RCV/IRV encourage more people to run and offer minority wings of the Democrat and Republican Party a taller seat at the table, it would also have the benefit of reducing negative campaigning.

RCV/IRV Would Grow The Republican Party

Big Tents discourage participation when establishments decide (using vastly superior fundraising operations) on a single candidate. Ranked-Choice Voting would allow every faction to rank their candidate 1st, with the possibility that many other factions may, in fact, rank their candidate 2nd.

More people would be willing to join and participate in Republican Party politics if they felt that their voice actually mattered. In fact, what would be the point in having Libertarian, Constitution, or Whig parties if all of these folks could have a more meaningful seat at the Republican Table.

This is an important point.

Protecting the right to vote for men and women serving overseas in the armed forces or living abroad is of the highest importance. In places with runoff elections, including deployed military and other overseas voters means sending and receiving ballots multiple times: once for the first election and then again for the second. However, international mail takes time, and so military and overseas voters may not have time to receive, complete, and return a runoff ballot before the day of the election, which is why federal law requires at least 45 days between rounds of voting in federal elections. Still, many state and local runoff elections occur as little as one week after the first round, effectively disenfranchising overseas and military voters.

We’ve already seen HB 553 and HB 932 fail in the House of Delegates. I would encourage every Republican in the Commonwealth to contact their State Senator and State Delegate and ask them to support RCV/IRV for any locality looking to implement it; as well as encouraging them to amend the Virginia State Constitution to include provisions for RCV/IRV for statewide elections.

No single change to our voting system would have a more profound and positive impact on our politics than Ranked Choice Voting. I know that most of the people in power will oppose this, but that is all the more reason for us to demand they accept and support it.