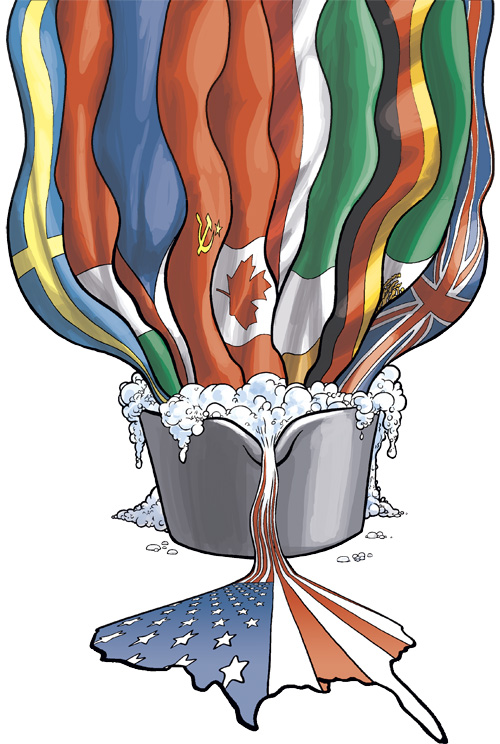 The Making of the Melting Pot

In May of 2015 my old elementary school, Public School (PS) 110 in lower Manhattan, celebrated its 110-year anniversary.Â  In honor of the occasion, the school published a special commemorative issue Â featuring â€œthen and nowâ€ photos comparing students from 2015 with those of 1905.Â  But what really piqued my interest in the commemorative issue was a two-page article from the May 29th, 1910 edition of the New York Times, which discussed in great detail the student self-government program at PS 110 and how it was turning â€œforeign children (overwhelmingly Jewish and Italian) into good Americans.â€Â  The excerpts below from the Times articles offer great insights into how educators over a century ago were instrumental in making the great Melting Pot.

When the new school building was erected five years ago, the student â€œgovernmentâ€ had been extended, and it served as a great help in solving problems with the foreign students.Â  Classes were formed for defective children, for the blind, and for children who speak no English.Â  These learn our language in a most amazing manner.

â€œIn two to six weeks the foreign children were able to take their place in regular classes,â€ said Miss Adeline Simpson, the school principal.Â  â€œThe work for defective children also is accomplishing great good.Â  The citizens of the two student governments, boys and girls, have been taught it is wrong to tease them, and any child who does so quickly will have charges preferred by some citizen.â€

Each student city is governed under a charter modeled on that of New York.Â  In this charter the officers are named, their duties outlined, and the rights and duties of citizens plainly stated.Â  For five years these two student cities have been thriving, and they have changed what was practically an ungovernable student body into one that well might be taken as a model for the city.Â

The school government, like real governments, is divided into three branches, legislative, executive, and judicial.Â  The judicial branch is the Board of Aldermen, which consists of one member from each â€œborough,â€ as the classes are called, elected by the citizens and serving for a school term.Â  The executive branch consists of the mayor, who, to aid him, appoints commissioners of police, health, and public works.

But the most interesting branch of this government is the judicial, power being vested in three judges who are elected by the citizens (students).Â  Before this real tribunal, offenders are arraigned by the District Attorney and his assistant, and no such offender â€œshall be denied the right of being represented by counsel, or of calling witnesses, or of trial by jury.â€ The jury consists of two judges of the court and three other citizens.Â  The Chief Justice presides.Â

Today, the student body of PS 110 consists of a disproportionately large immigrant population from all over the world â€“ Philippines, Ukraine, Latin America, Bosnia, Afghanistan, China, Korea, Guyana, and the Caribbean.Â  But in 2015 the PS 110 Principal boasts – not of making good Americans out of these students – but rather making them â€œcitizens of the world,â€ whatever the heck that means.

They say that the definition of insanity is doing the same thing over and over again when you know the result will not change.Â  To that I would like to add my definition of stupidity:Â  the replacement of the proven processes and methods that worked well in the past for things which do not work well today, such as multiculturalism and bi-lingual education.Â  Given this tendency to eschew the successful approaches used so effectively by earlier generations of educators, is it any wonder we have college students who do not understand our Constitution, the First Amendment, or the workings of American Â federalism, and who demand protection from â€œmicroaggressionâ€?Â  Â Â Â Â Â

The Making of the Melting Pot was last modified: January 1st, 2016 by Guest Contributor Mark Jaworowski

Boy, the Left and Bearing Drift are going to rue the day that they get the polyglot boarding house that they are creating here. Let’s import millions of poor people and then don’t encourage them to assimilate (the Left does that, Bearing Drift has some schmaltzy idea that they will by some miracle assimiliate despite their fellow supporters of illegal immigration’s insistence on diversity.)
You are going to get a strong shift LEFT–Democrats know that entitlement spending is popular with their new voters and Bearing Drift?? Someone else will pay for the cost of entitlements, not their beloved corporations.

Liberals and Bearing Drift Corporate Lackeys: Money does not come from Santa and we are pushing the budget limits to infinity… Say Bearing Drift… did you know that California with a budget that is in complete fantasy land has the highest number of poor people now in the US? Guess what else they are the champions of also due to their sanctuary status… Yup immigrants, legal and illegal..

Civics is no longer taught in our schools – neither public nor private. Our kids don’t know who we are and what we stand for. That’s why they are ripe for the picking when it comes to anti-Americanism and global governance. They care more about refugees than our own citizens who need assistance. Part of the plan to take us down.

what? Civics is taught in the schools. Have you been in a school lately? Do you have kids? Maybe you mean to say that the schools do not indoctrinate the kids into a unwavering belief in the GOP?

SD – this is a little bit off topic from my article, but I will offer my two cents.
I have four kids, and three of whom have attended public high schools in relatively conservative Stafford County. They have had “Government” as a subject. All three have varying opinions on how effectively it was taught.
My problem is not with civics but bi-lingual education and multiculturalism, particularly the latter, which I believe can be laden with too much America-bashing (it depends on the teacher) and little – if any – critical analysis of other cultures and political systems. For example, our neighbor, Mexico, is an almost failed state, with 20% of its population having left within the past two generations. Our students should know why so many people south of the border find political life insufferable there, and that in too many countries in Latin America the constitutions are like ice cream on a summer’s day – easily melted. Which is why I bristle when I hear American students pining for a “living and breathing constitution.”

Multiculturalism is the absolute base foundation of liberal progressive politics and the driving force enabling the necessary encouragement and maintenance of ethnic identity politics that has propped up the Obama administration and it’s agenda for the past eight years. The Democratic party’s sole reason to exist is to care and feed the continuing growth of the entitlement state. Without the ability to pick and choose those that receive and those that are denied among these groups by maintaining a constant state of friction within the competing population segments the elites that have self installed themselves on top of the multicultural pyramid would quickly see their power and control wane. As long as “my” problem or issue doesn’t become “our” problem or issue the progressive scam is allowed to thrive. At the end of the day maintaining the divisions of multiculturalism is far and away more critical to the typical governing elite then any adherence to forms of constitutional governance. If we can slay the multicultural dragon in it’s many political, educational and media manifestations today in the United States we can and will take our country back. Until then any hope of a return to a national identity will be an unachievable goal.

Requiring immigrants to learn English is important because we must have something that unifies us and help us to communicate with each other. Illegal immigration not only ignores the need to learn a unifying language but we often see illegals setting up their own underground communities. It’s not healthy for a country. Mexico would never allow it – but they encourage their citizens to come here and do it. If we’re dumb enough not to close the front door then you can’t blame illegals from coming in because they want a place to stay.