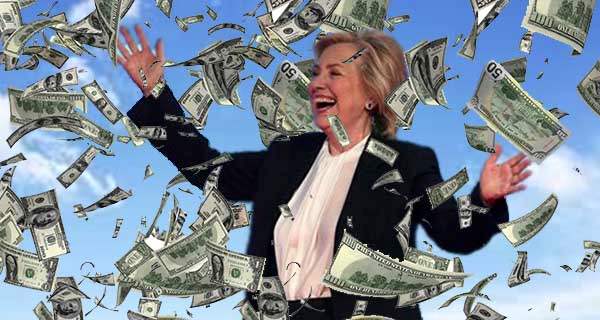 That golden oldie from the Nifty ‘50s has been running through my mind lately. Of course, the Money Tree didn’t exactly “happen” to most of us. A few twigs, perhaps, but nothing like the Mother Lode hit by former President Bill “Bubba” Clinton and his blushing bride, Hillary Diane. They scored really (really!) big – mostly under the radar – while the rest of the country was preoccupied with crashing Twin Towers, war in Iraq, suicide-bombers, Abu Ghraib, water-boarding, Obama’s “coronation,” a trashed economy, the Benghazi embassy-killings, IRS-corruption, the illegal immigration explosion, a runaway presidency, Obamacare, ISIS, a massive Congressional turnover; et cetera, et cetera, et cetera.

Word has finally leaked out, in dribs and drabs, that some $2 billion in “gifts” from foreign governments, businesses, investors and “friends” of Bill and Hill have flowed into coffers of the “Clinton Foundation” – a good deal of it on its way to the pockets of the Clintons, including their daughter, Chelsea, whose extraordinary talents have already made her a zillionaire. Most of this wonderful outpouring of generosity occurred after Mr. Clinton’s presidency and during Mrs. Clinton’s service as a U. S. senator (D-NY) and Secretary of State.

Donations and mega-fees for Bubba’s speeches grew during Mrs. Clinton’s run for the Gold in 2007-’08. Still more bucks poured in during her tour as Secretary of State, when several countries she was dealing with sent large donations to the Clinton Foundation. And her begging-cup truly overflowed during her 2016 presidential campaign, which tragically failed. Some curious reporters have looked into whether those “donations” from foreign governments – often in the millions of dollars – were quid pro quo for favorable treatment by Madame Hillary’s Department of State. Peter Schweizer’s book – Clinton Cash: The Untold Story of How and Why Foreign Governments and Businesses Helped Make Bill and Hillary Rich – details the source and timing of many transactions.

The latest info to emerge relates how Russia gained majority-control of Uranium One, a Canadian company formed by several long-time Clinton supporters, which owns uranium-mining interests stretching from Central Asia to the American West. Those partners made substantial donations to the Clinton Foundation during negotiations that ultimately permitted the Russian nuclear agency, Rosatom, to buy control of Uranium One. The deal significantly advanced Vladimir Putin’s goal of cornering the world’s uranium reserves.

“Beyond mines in Kazakhstan that are among the most lucrative in the world, the sale gave the Russians control of one-fifth of all uranium production capacity in the United States. Since uranium is considered a strategic asset, with implications for national security, the deal had to be approved by a committee composed of representatives from a number of U.S. government agencies. Among the agencies that eventually signed off was the State Department, then headed by Hillary Rodham Clinton.”

During the negotiations leading to this sale, Uranium One’s chairman made four donations to the Clinton Foundation totaling $2.35 million. Becker and McIntire further reported:

“Those contributions were not publicly disclosed by the Clintons, despite an agreement Hillary Clinton had struck with the Obama White House to publicly identify all donors. Other people with ties to the company made donations as well.”

Following Mrs. Clinton’s departure from State in 2013 – and undoubtedly in anticipation of her 2016 run for the presidency – funds continued to flow into the Clinton Foundation from all over. An exact total is not yet available (and may never be available.) But the money-gusher finally drew the attention of folks who wondered how much of that moolah actually funds the “good works” the foundation is supposedly doing. They found that just 15% of donations to the Clinton Foundation went toward actual charity work. The other 85% covered salaries, travel and various “expenses.” One report documented foundation-expenditures of some $50 million on Bill Clinton’s travel expenses since 2003. (Rumors that he rented the solid gold carriage once used by Hapsburg Empress Zita remain unconfirmed.)

In a radio interview with Hugh Hewitt, former GOP presidential candidate Mitt Romney said the Russian uranium deal “looks like bribery…” (Oh, no kidding?) Other political figures and commentators – not all of them Republicans – have chimed in, and the word “treason” has been mentioned. Mrs. Clinton’s media allies, who cheered her “historic” runs for the White House, have either fallen silent or said, in disappointed tones, how “bad” this looks.  One well-known Democrat pol admitted that “…it really doesn’t smell very good.” (Ya think?)

To Yours Truly, standing well downwind, the thing stinks to high heaven. A Republican caught in anything like this would be investigated by the FBI and almost certainly indicted. But no need to wait for a trial. The media would pile on a mountain of accusation and condemnation. (C.f. the Red Queen’s famous decree: “Sentence first, verdict after…”) And Dems would shed crocodile tears over the incurable corruption of all Republicans. It would be a total disaster for the GOP.

This has obviously not happened to the lovely Miss Hillary and her irrepressible Bubba. Savvy Clinton Way experts say the Clintons will follow their tried-and-true game-plan. First, they will hunker down and let most of the ill winds blow over. They will remain silent as long as possible, while sending out various flunkies to claim that ‘there’s not a shred of evidence,’ as did Brian Fallon, a spokesman for Hillary Clinton’s recent presidential campaign, who said:

“To suggest [that] the State Department, under then-Secretary Clinton, exerted undue influence in the U.S. government’s review of the sale of Uranium One is utterly baseless.”

Then, if the matter simply won’t go away, one or both of the Clintons will admit publicly that “mistakes were made,” while claiming that no laws were “intentionally” broken. (Translation: “Yeah, we did it, but we didn’t really enjoy it…”)

Finally, if all else fails, they will dramatically throw themselves on the mercy of the American People, ‘…whom we have faithfully served for our entire lives…’ With a lump in his eye and a tear in his throat, Bill Clinton will invoke God’s blessing on “this great country.” Only an emotional call to “go home by way of the altar,” while a choir sings “Just as I am,” will be missing from this shameless faux-evangelical shtick. (Somewhere, Elmer Gantry will be smiling.)

Will it work again? Probably…well, make that a definite “Maybe.” Republicans can’t stop the Clintons because Big Media reflexively defend them, saying it’s all about politics (or sex, or whatever). Only Democrats can keep Madame from monster-mashing onward with her post-election What Happened tour, and wrecking the party in the process.

Remember that Bill and Hill’s erstwhile supporters are mostly committed Democrats first, and Clinton aficionados second. Serious Dems want to win again, and for that they need a new “face” on the party. Many believed Hillary could be that face – although some (but not enough) saw that she was too damaged to win. This writer and a small company of others consistently warned that The People would never accept her. That prediction turned out to be true in enough states to deny her the brass ring. (God bless the Electoral College!)

So what’s the bottom line? A fifth-grader could tell you that a serving Cabinet Secretary taking money from countries she is dealing with – even if the funds go to a “foundation” run by (and for) her family – is a conflict of interest so absurdly corrupt that would be hilarious if it weren’t so serious. That this was done covertly, in violation of a sworn agreement to disclose such “gifts,” worsens the situation. And the further revelation that part of the pay-to-play arrangement probably damaged national security raises the specter of actual treason. This doesn’t just smell bad. It is bad! Even the staunchest Democrats can see that it goes far beyond politics. That’s why the complaints we’re hearing are coming mainly from the Clintons’ end of the political spectrum.

Barack Obama’s Department of Justice showed no interest in the Clinton Money Tree. But finally Mr. Trump’s DoJ seems to have discovered it. Will there be a serious investigation into the Clintons’ “Russia-connection?” We’ll see. Stay tuned.

I don’t often pray that Democrats will come to their senses to help the country, but I’m making an exception here. This is a dangerously corrupt couple – completely unbound by any sense of propriety or patriotism – who believe that rules apply to others, but not to them. Their wigged-out Madame Defarge absolutely must not be allowed anywhere near the awesome powers of the presidency. America will never be “ready for Hillary.” The thrill is gone – if it ever was there at all… 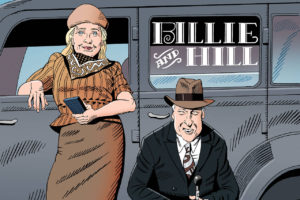 Do you seriously think you can pin a rap on us?

Speaking of uranium (and something that is relevant for today) why again did the gov’t recently decide to reduce the size of land at the Bears Ears Natinal Monument?

You’re a “software soldier”, shouldn’t be too hard for you to follow the money on that little arrangement.

Part of “looking forward” is restoration of the public’s trust in our system of justice. The People know the Clinton-Russia thing was as queer as a 3-dollar bill. Until that is addressed, there will be no “moving on.”

I guess, if you think retaliating against losing candidates is the thing to do, which is what many third world dictatorships do in trumped up elections. TThis is why Stewart or Jackson or Frietas will get spanked badly next year and why the Republican Party in VA is in total meltdown, need to look forward rather than trying to take VA back to 1850.

See here is the problem. Hillary used her government office for espionage —- yet Trump is being investigated. Hillary commits a massive crime and you cover it up. Trump does nothing but that is big (fake) news.

Funny that all crimes have to be investigated and prosecuted AFTER they are committed.

The nature of innocent until proven guilty.