The Most Lucrative College Majors and the Least

According to Anthony Carnevale, an economist at Georgetown University, college majors are more important than where you attend college. This is his chart showing the most lucrative majors, and the least lucrative majors: [read_more] 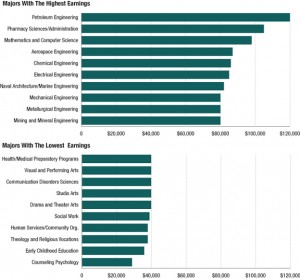 “Figures are median income for all full-time workers with bachelor’s degrees in each subject. Workers with graduate degrees are not included in the data.”

My first thought, ALL of the majors that make the most money require students to have a good math background. What a shame our public schools continue to dumb down math programs making it more and more difficult for students in the US to have the background necessary to major in the most lucrative fields. Is it any wonder that parents and students fight to get into TJHSST where those math courses are offered?  Too bad FCPS will never allow another TJ despite the fact that 3,000 students a year compete for 450 spaces..

The Most Lucrative College Majors and the Least was last modified: October 15th, 2014 by Jeanine Martin