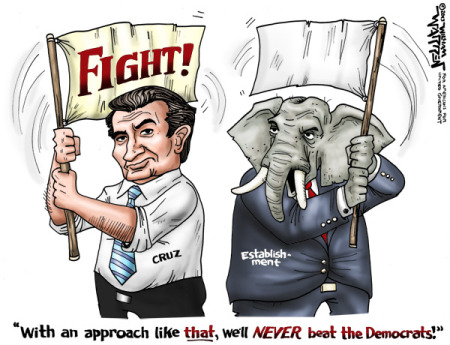 The Myth of the Establishment Republican

Despite what you hear on cable news and talk radio there is no such thing as an “Establishment Republican.” It is a pure contrivance. It was created for two reasons, ratings and simplicity.

I have been working the polls in primaries and general elections for the last twenty years. I have heard from literally hundreds of voters on what motivated them to vote and in all those years not one voter described themselves as an “Establishment Republican.”

I trace the roots of the term Establishment Republican to Rush Limbaugh and Sean Hannity, and others in the ‘conservative’ talk radio industry. After years of offering unstinting and blind loyalty to George W. Bush, they discovered conveniently about six years into it, and after W’s last mid term election, that conservatives were souring on W. It was clear that Limbaugh and the others had to redefine themselves if they wanted to keep their viewers.

It is ironic because if there were such a thing as an establishment Republican, Hannity and Limbaugh would fit the bill. Their obsequious support for Bush was downright embarrassing. Hannity even suggested that Bush might one day be on Mt. Rushmore. In another example, in an order not to hurt the Republican Party they waited until after Bush’s last midterm election to criticize him.

At least on fiscal issues and foreign policy one could argue that Bill Clinton was to the right of George W. Bush, yet Hannity and Limbaugh praised and defended Bush for a combined six hours a day for at least six years. Funny, they never mention W anymore. They don’t fondly reminisce about the glorious days of George W. Bush. No, they just talk about the evil Republican establishment, which they are fighting with all the strength they can muster. But despite their devotion to the Republican Party, Hannity and Limbaugh need high ratings to stay on the air. Their ratings still depend on conservatives tuning in.

Limbaugh and Hannity promise to slay the evil establishment. And never mind that while W. went on a spending binge and adopted a neo-conservative war in the Middle East, they carried W’s arguments.

Limbaugh backs Trump, not because Trump is a conservative, which he is far from, but because he fits the narrative of the battle against the Establishment Republicans.

In addition, the mainstream media likes the term Establishment Republican for the simplicity of it. They like simple categories and then they can assign which candidate belongs to which category. All part of the dumbing down of America.

The Republican Party needs to return to conservative principles and reject the fraudulent theories of Limbaugh, Trump and Hannity.