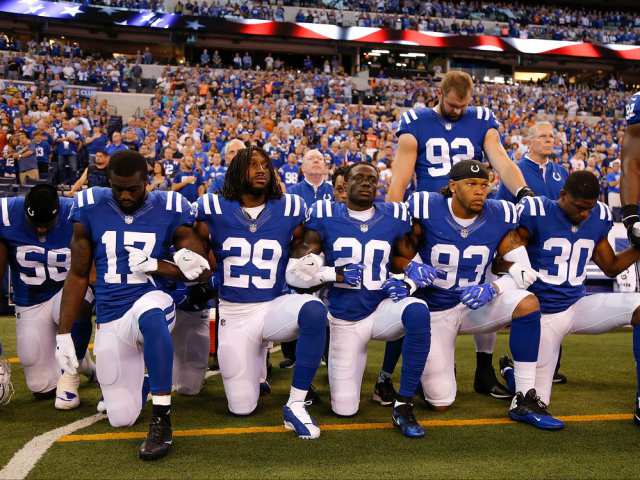 The Nashville Statement and NFL Football

All great civilizations and cultures have come to the same place; success, relative prosperity, power and influence bring expanded leisure and options, followed over time by various political, legal and cultural machinations created to protect the status quo of the successful, by the successful.

Instead of excellence and boldness, mediocrity slowly becomes acceptable, along with a sense of privilege and entitlement.

Finally, timidity becomes the coin of the realm; the default currency for social transactions. The issues of the day become increasingly valued not on facts, what is right or wrong, or even guided by common sense. They are traded on the characteristics of emotion and the path of least resistance – and the least opportunity for troubling, nagging outcomes. What was clear becomes obscure, and what was certain becomes questionable.

The pressure to be “moderate,” – timid – grows like crab grass. No one wants to stand out for the “wrong reasons,” or be connected with unpopular cultural positions, even if they are self-evidently true.

In Western cultures, this also increasingly means that huge transnational corporations and powerful private groups begin to drive the hip, edgy, and the latest cultural fads with an eye towards profit and influence, not what benefits the society at large.

Often, the results are disastrous.

In the last month there has been two excellent examples, one faith-based and the other secular, that demonstrate the triumph of timidity in our cultural decision making generally – and drive home the high cost of that timidity – from the opposite ends of the bandwidth.

In late August a coalition of well-known evangelical and orthodox Christian leaders met in Nashville, Tennessee and believed it necessary to proclaim the obvious in “The Nashville Statement (read here):”

“We [the signatories] are persuaded that faithfulness in our generation means declaring once again the true story of the world and of our place in it—particularly as male and female.”

It is a bold and elegantly simple statement of fourteen truths about the nature of God, His creation, and the restoration of His people, specifically as it informs human sexuality in an increasingly confused society. What is the nature of marriage, and the distinctiveness and unique purposes of both male and female? How is an individual’s dignity and worth secured, and how can people reclaim that dignity once lost?

The simplicity and clear language of the Nashville Statement draws it strength by comparison to the timid response of a significant slice of the larger faith community and mainline traditions that are increasingly fumbling or capitulating to the culture – discovering ambiguity on matters that had always been distinct and clear.

There would be far less confusion over human sexuality except for the weakness of the defense by those called to uphold the Truth in the first place.

In the preamble, the Nashville Statement sets the bar; “[Western culture has] embarked upon a massive revision of what it means to be a human being.”

As absurd as it sounds, the compulsion to challenge the indisputable truth of DNA is the new frontier of the unnatural – a world the utopians dream of – stripped of the dignity and worth of our divine manufacture. It is idolatry on the highest order.

The negative reaction to the Nashville Statement has been ferocious. The attacks have been, of course, from the radical Democratic base, the social justice crowd, Marxist college debutantes, but also from the organized radical left in the “progressive” religious crowd, and not surprisingly from some of the established denominational churches.

In a word, the assaults have been brutal – and mostly simple distortions and lies. The word “bigot” is used a lot.

This first example, of course, is a profile of courage on the part of a handful of leaders saying; “We will stand for the Ageless Truth, no matter the cost,” and that voice alone makes them counter-culture in today’s environment.

The secular example of this bubble of timidity and “moderation” is the current National Football League’s self-inflicted brouhaha over the National Anthem. This, of course is on the other end of the bandwidth.

What started as an inane and empty gesture last year by a single player, who had no obvious relationship to the purported grievances, was swept up in the timidity of the NFL, evidently believing that American football fans were hell-bent on supporting a trendy cause.

Instead of enforcing their own rules, the NFL and the teams timidly took the easy road by allowing the radical left to make kneeling before the Anthem a “cause,” no matter how improbable. Before you could say “hike!” the dye was cast. We had serial vapid statements by coaches and players alike justifying why they had some unique right to insult the national flag. Free speech and all of that, even though, of course, they have no such right as employees of the team, while they are on the field.

Now, the various NFL teams and players are being lionized as heroes by the radical leftists in the media, Hollywood, the Democratic left, and interestingly from some major corporations. The only problem is that demeaning and disrespecting the Armed Forces, the police, and the flag are not memes in the minds of actual football fans, nor average Americans.

The NFL clearly thought they were in front of the parade. Now, a financial and public relations disaster has them at third down and long, and they are short a man on the field. The NFL’s timidity and infatuation with the trendy social issues of the day trapped them like a four man rush.

I don’t know exactly how we rescue ourselves from the amazing stupidity that is going on in our culture at so many concurrent levels. I only know that it starts with the truth – often the hard truth – not emotionalism, spoken by responsible adults who care enough to say that chromosomes really do matter, and that America is the greatest force for good the world has ever known – blessed by God for boldness.