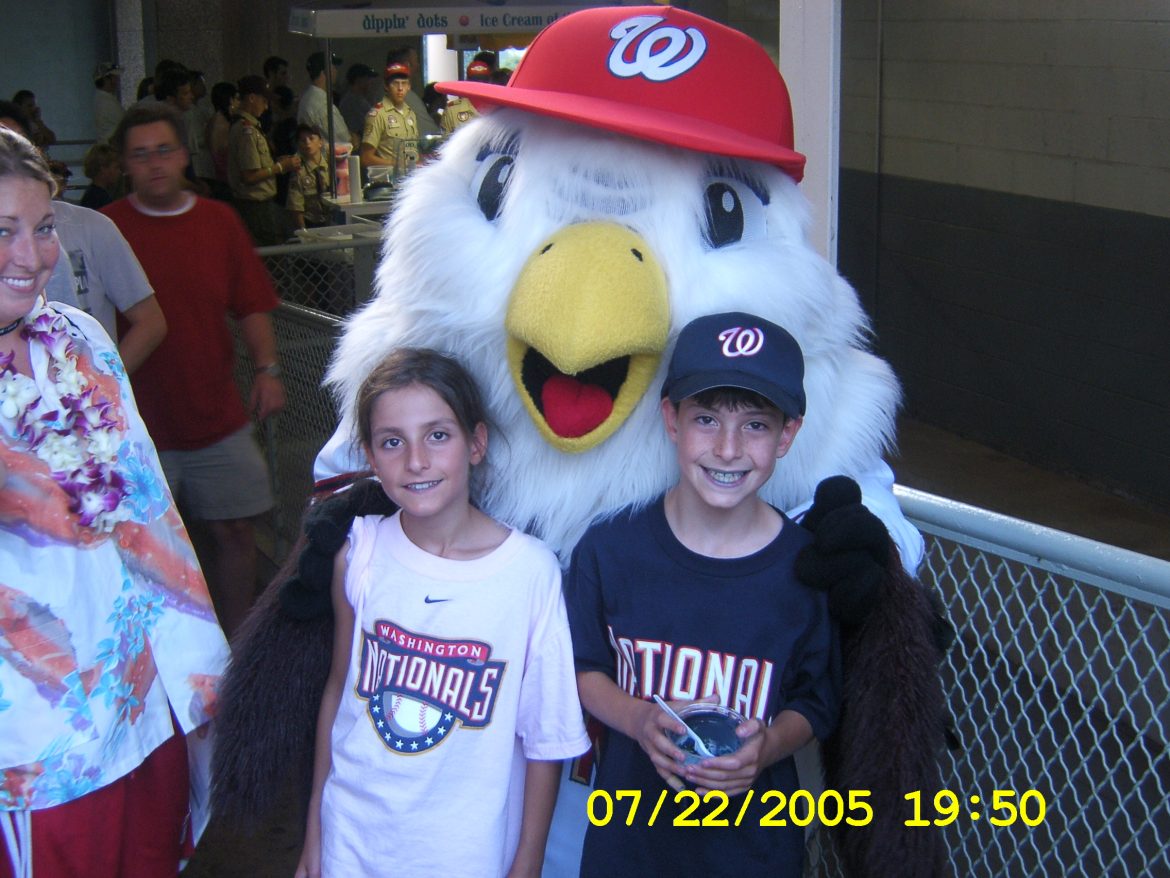 It's a family affair! The Reid twins attending the National's game in 2005

The Nats are part of the family in the DC area

Successful Washington team is poised to win the World Series

For my family and many in the DC area, which had no professional baseball team from 1971 to 2005 when the Montreal Expos franchise was transferred to DC, the Nats are an adopted team.

So, like a lot Nationals fans, we rooted for other teams (me, the Mets) before the Nats came along.Â  Only a small segment of the Nationals fan base lived in the DC metro area when the Senators last played at RFK.Â

And being the involved father that I am, I was determined my twins, James and Lara, were going to play a sport and that sport was going to be baseball or softball.  (I felt it required more thinking than soccer and less chance for injury â€“ though, both kids got fractures while on the diamond!).

Sure, we took them to see the Frederick Keys a few times – -its only 30 or so minutes north of Leesburg, but when the Nats opened play at RFK stadium in 2005, I was determined to give my kids exposure to a professional team.

And, exposure they had.  I purchased multiple-game plans and even a full season one year which I split with other people.

It was not long before my wife, who grew up without any interest in sports in her family, became an avid baseball fan, although her late mother liked baseball.  â€œJust get me a hot dog and a beer babe, and Iâ€™m set,â€ Val Guardiani would tell us.

Attending these games was expensive in terms of gas, food, and trinkets.Â  Fortunately, I only three times paid for parking at all the games we went to at the new Nats stadium, as I was very good at finding it free on the streets near that concrete mixing plant on Half Street.

I have Nats hats of every color, a Screech bobble belly, a Patrick Corbin bobble head, a Nats pennant and now a â€œterrible towel,â€ and we used to hoist a Nats flag out the car window to and from games until it finally blew away.

For the first few years the Nationals were in DC, wearing these hats with the curly â€œWâ€ drew odd looks, a few asking if it was a â€œWalgreensâ€ hat. No, the Nats do not have a â€œnationalâ€ following like the Yankees, Dodgers, Cubs or Red Sox.

It was also fun seeing famous people â€“Â  including a few U.S. senators in the Presidential box behind home plate (courtesy of a fellow councilmember) and evenÂ had a discussion in the seats near home plate with Karl Rove when W. Bush was in office. We saw Bush throw out the first pitch at the opening game in 2005. Â  I saw Roger Clemons pitch when he was with â€“ yes, the National League Astros â€“ and our RFK seats were adjacent that of DC Councilmember Harry Thomas (who went to prison on some corruption charge years later).

In all the years I was on the Board of Supervisors, I never attended the Lerner familyâ€™s get together with George Will (a huge baseball fan) at their home in Chevy Chase.  It always fell on a board meeting night. The Lerners have been phenomenal owners, not only because of how they have invested in the team, but how they remade a slummy part of DC into a model of urban development.   They also have created a safe environment for people to bring children â€“ RFK Stadium is not a safe place, and Senators attendance dropped in part due to that.

The Nationals are among the most successful franchises in the Major Leagues â€“ exceeding 2.2 million in attendance at their games each year since 2012.  In some years, have drawn 2.7 million and only in six seasons were they below. .500 in wins and losses

Over the years, we got the kids involved to get autographs, bring their gloves to see if they could catch a foul ball, bought them plenty of Dippin dots ice cream, cotton candy and trinkets.

I stopped being a season ticket holder in 2009 because it was too involved to be divvying up 81 games among several people, but I managed to take the family to at least one Nats game every year since.  Lara attended a Royals Expos â€œThrowbackâ€ game in July and Jamie was at games with us in 2017. I watched very playoff game they played, including in 2012 when I had to stay up at 2 am when I was staying in Turkey.

My son, now an HR professional in California, called me the other day about watching the World Series.  We reminisced about the Nats games we attended. He has a blue Nats hat signed by some player and we think it could be Ryan Zimmerman, a Virginian who has been with the Nats from the get-go.

Jamie told me that he was grateful I exposed him and his sister to professional baseball when they were young.  That made this hands on doting dad feel very proud.

Go Nats!Â  Even if you donâ€™t win the Series, we fans who either adopted you or were Senators fans long ago, love you for what you and your owners and management have done to make us all proud!Â Â Â Â

The Reid family enjoying the Nationals games over the years:

The Nats are part of the family in the DC area was last modified: October 24th, 2019 by Guest Contributor Ken Reid