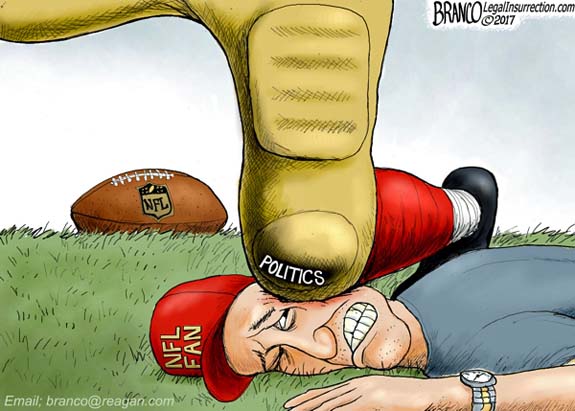 The NFL Is A Political Organization

As a kid growing up I used to love reading National Review, and I think my favorite part of the magazine was John O’Sullivan’s column. John ‘O Sullivan was a great writer and thinker, and in these politically correct times I think about his first law of public policy:

That is all organizations that are not expressly right-wing will over time become left-wing.

He cites examples such as the ACLU, the Ford Foundation, founded and funded by a capitalist, and even the Episcopal Church, a church that now accepts people without regard to what they believe – being judgmental is extremely politically incorrect.

O’Sullivan reasoned that most people who staff such organizations reflect the culture at large, and are more likely to follow the latest cultural trends. And as the country, at least culturally, moves further and further to the left, organizations, whether for profit or not, will keep up.

I remember when Miss America was a conservative, but the lefties took over that organization many years ago. The current Miss America complained about the Trump administration’s decision to withdraw from the Paris climate accord. Such a move may have saved taxpayers billions of dollars, but it upset Miss America, and of course she feels the need to let you know what she thinks about it.

My guess is that in the future all Miss (or I guess it is now Ms.) Americas, will have canned anti-Trump answers at the ready. Perhaps Black Lives Matter or the Southern Policy Law Center will provide talking points es gratis.

The NFL is no different than the Ms. America organization. A Ms. America contestant is no more likely to admit that she voted for Trump as is an NFL football player, or the owner of an NFL franchise. In the current climate if you are a conservative you must keep quiet. The NFL and Ms. America are part of America’s cultural rot. That is, they mirror the culture. They express thoughts and act in ways that seem politically and culturally correct.

A beauty contestant is not just going to walk around a stage in a bathing suit. She wants to be taken seriously. So she and her fellow contestants, when given a chance, will have to establish their leftist bona fides and signal their progressive virtue, and one good way to do it is to denounce the Trump administration. A football player is not just going to run up and down a field, he is going to remind you that America is a racist country, and of course Trump is bad as well.

Now, most people want to watch sports because it offers an escape from politics, but that will not happen. The NFL has made it clear that they have and will advance a political agenda. Yesterday the NFL owners sent out this tweet:

“Today owners and players had a productive meeting focused on how we can work together to promote positive social change and address inequality in our communities.”

“Promote positive social change?” “Inequality in our communities.” These are the banal phrases that we expect from Think Progress, and the Southern Poverty Law Center.

If the NFL owners wanted to keep politics out of the game they would have told the players that you are not allowed to politicize our National Anthem, you must stand or else you sit for the game. Instead, they have allowed the players to stage a protest while in uniform and on the clock. What other employer would have allowed such conduct?

The NFL does not shun politics. They take political positions, they lobby the government, and they contribute to political candidates. They are a political organization.

So why would conservatives want to fund the NFL? Why not deny them your money, and find something else to keep you entertained on Sunday?

The NFL Is A Political Organization was last modified: October 19th, 2017 by David Shephard

Republicans MADE POLITICS ‘TAKE OVER’ bathrooms! by demanding POLITICAL SOLUTIONS to the non-political issues of who can pee.

Republicans MADE POLITICS ‘TAKE OVER’ the boy scouts and the girl scouts by demanding POLITICAL RESPONSES to how these PRIVATE associations service their consumers.

Republicans MADE POLITICS ‘TAKE OVER’ the Gospel of the Lord Jesus Christ by saying the Jesus didn’t ‘really’ man what Jesus said recorded Matthew 25.

Republicans MADE POLITICS ‘TAKE OVER’ society’s care for children – all children – by demanding POLITICAL TESTS for which children will survive in America: ‘unborn children’ are used as POLITICAL FETISHES but as soon as the ‘unborn’ is born Republicans ABANDON them and let them starve and die without accessible, affordable health care for their tiny innocent babyhood, innocent childhood, and emerging adulthood, and let their families starve and die, too without health care.

There you go. We told the truth. Which is more important: that millionaire football players kneel or that you abandon innocent children, and their families, to starve and die?

Oh, and because the kneeling is usually about police-conducted killings what about that?: do your police – where you live – work without any racist mindsets, biased judgements, incorrect procedures, false arrests? Shouldn’t we all be involved with our local law enforcement to ensure GREAT training, GREAT re-training, fitness of duty evaluation and inservice counseling whenever needed? Which means we probably should be eager to pay higher fees and taxes to ensure that?

The NFL said “no” to pink cleats for Breast Cancer awareness month. They said “no” to a small sticker on the helmets of the players on the anniversary of 9/11. They said “no” to all sorts of things, using the excuse that only the official uniform was permitted. Yet Kaepernick was allowed to wear socks depicting the police as pigs, with no interference by the coaches or the NFL. Apparently, whether or not the unauthorized display is permitted or not depends upon how closely aligned it is with the personal political views of the coach and the NFL.

What’s depressing is that in its early decades the NFL was, in fact, a conservative institution. After the NFL/AFL merger in the 60s, the league began to style itself as a patriotic and All-American entity, drawing fans from blue collar and traditional segments of the population just as the counter culture and leftist academics began the process of deconstructing and undermining every other institution. Until recently, the NFL was where all Americans could go to connect with everyone else. But the left has finally caught up. Like with everything else Americans love, they isolate it, infiltrate it, take it over, gut it, and then wear its carcass like a hat. (HT Iowahawk).

Let me be more specific for you, Steve. I have said this before and I will say it again. More than half of the NFL owners are now Ashkenazi Jewish, which, for those you may not know, is the most liberal ethnic group in the USA. Therein lies the cause behind the NFL’s left-lean in recent decades. Same could be said for the media.

I really don’t understand why corporate America hasn’t learned to keep their fat mouths shut on political issues. What do they gain by taking a side and angering half of their customers?

Especially in this case where the NFL has alienated a large portion of their hardcore fanbase. Its the equivalent of Burger King pandering to vegans.

I don’t get it either, it’s like they don’t even care that they are disrespecting people, or don’t understand that they are, or something. Clueless.

Arrogance and pride are a deadly combination. The NFL, like the Swiss watchmakers a half century ago, have a monopoly on excellence in their own mind. (If you wanted the best watch, only a Swiss watch would do. Unfortunately, Japanese technology quickly proved that you could make a more accurate timepiece using electronics rather than mechanics. One of the great business class case studies is what the Swiss were forced to do.)

The NFL is now confronted with the adverse effects of monopolistic thinking, and they still don’t get it. To them, the fans they lose this year, will be replaced by other fans next year and they just have to survive. And, of course, political correctness with its social justice mantra is now front and center In the NFL so they redoubling down on insulting the fans. Well, maybe the customers will come back but that is a very risky bet – and you have to wonder just how few paying customers is sufficient to keep the gravy train rolling.

I used to a be die-hard NFL fan, but haven’t watched one minute of it this year. I haven’t even missed it so far, partly because college football is far more entertaining anyway. I don’t see this working out well for the NFL, because they cannot get their alienated fans to return very easily. They will likely die a slow death, just like Hollywood which has been declining for years already. After the NFL started this war with their fans, they will find it isn’t so easy to retreat and start over. The players won’t retreat, and the NFL leadership is too feckless to address the issues forthrightly. They’re still too busy virtue signalling to worry about the future of their business or the satisfaction of their customers.

The NFL can’t put the toothpaste back in the tube. They have broken the relationship between a fan and a team. Now all they have left is lying to themselves about what will fix what can’t be fixed.

Don’t forget the Veterans day boycott of the NFL. I believe it will be on Sunday, 12 November.

I am trying to boycott NFL Sponsors but I don’t drink alcohol even Russian owned Budwiser.
I love my made in Norfolk, Va
Ford F-150 and really can’t bring myself to purchase a new overpriced one.
I do have to admit I love Pepsi but I need to quit drinking pop all together.

This is tough so I will just NOT watch NFL besides College football is more fun to watch.
And Liberty University has Ice Hockey,
even the Canadian players stand for our National Anthem.

it will be interesting to see if USAA continues to advertise with the NFL. By the way, I don’t own a Ford product and don’t like Pepsi.

Reading the comments USAA has provided to their customers asking that they (USAA) terminate their sponsorship of the NFL, it is obvious USAA will do no such thing and values $$$ more than their military/veteran customers.

I suspect this will be revisited before the next nfl season. USAA has lots of veterans and current military. The nfl is a stain on the USAA.

I would hope so. I’ve already dropped my insurance with them because I’ve found cheaper options with more coverage. As far as banking goes, their auto loan rates haven’t been competitive either. The last two cars I bought I got better rates through the dealer than with USAA. Essentially the only thing they have going for them is convenience for active duty folks.