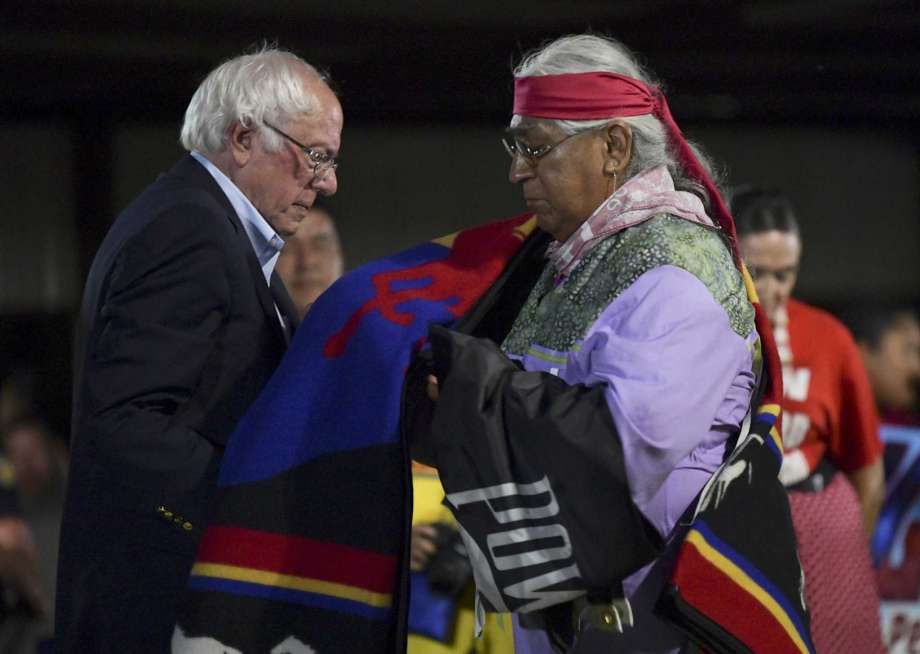 The Order of the Walking Eagle

Last week Senator Bernie Sanders, campaigning for the Democratic nomination for the presidency, addressed a gathering of the Comanche Nation in Lawton, Oklahoma – the state where his political rival, Senator Elizabeth Warren, was born.

The Comanche – a Plains Indian tribe of about 17,000 enrolled members – were holding their 28th annual Nation Fair Powwow on September 22nd at the tribe’s headquarters in southwest Oklahoma, just north of Lawton in the foothills of the Wichita Mountains. The powwows typically feature traditional dance, songs, food, regalia and native-customs.

Senator Sanders entered the powwow grounds in a procession of tribal leaders, led by a group of Comanche women dancers in traditional dress. In his address to the gathering, the senator said:

“I know and you know, that for too many years the needs of the American Indian have been ignored, treaties have been broken, and lie after lie has been told to you…”

As a symbol of goodwill, the tribe presented Senator Sanders with a Comanche Nation Blanket. He was also awarded the highly valued Order of the Walking Eagle – a high honor bestowed on occasion by many American Indian tribes.

Senator Sanders’ appearance at the Comanche Powwow naturally recalled the controversy sparked last year, when Senator Warren released the results of a DNA test that she hoped would support her claim of American Indian ancestry. The test indicated possible Native American ancestry, between 6 and 10 generations in the past – meaning that she might be 1/1024 (i.e., 0.09%) Comanche. Sympathetic liberal media have trumpeted this as “strong evidence” of her Indian ancestry claim, but genetics experts say she has no more Indian blood than most Americans.

On the political scene, release of Ms. Warren’s DNA results backfired when tribal groups took offense at her self-serving claims. This led her to issue a public apology to all American Indians – a move viewed as damage-control to keep the ancestry-issue from becoming a drag on her presidential campaign. President Trump has mocked Senator Warren’s employment of bogus ethnicity to obtain a professorial post at Harvard University, and has noisily tagged her as “Pocahontas” during his presidential term.

Senator Sanders’ receipt of the coveted Walking Eagle award at the Comanche Powwow has produced rival demands for its bestowal on Senator Warren as well. Those calls prompted some curious reporters to delve into the origins of the oddly-named award. Ultimately, they traced it back to the 2008 presidential campaign, when Senator Barack Obama was invited to address a major gathering of the American Indian Nation in upstate New York. According to an anonymous report:

“The dynamic young senator spoke for almost an hour about increasing the standard of living for every Native American. He highlighted his service in the Senate, when he had voted for every Native American issue that was proposed. Although vague about the details of his plans, Mr. Obama was most enthusiastic and spoke eloquently about his desire to help his ‘Red sisters and brothers.’

“At the conclusion of his speech, the Tribes presented Mr. Obama with a plaque inscribed with his new Indian name: Walking Eagle. The senator proudly accepted the plaque and then departed in his motorcade, waving to the crowds.

“A reporter later asked the group of chiefs about the new name they had given to the senator. They explained that ‘Walking Eagle’ is the name given to a bird that is so full of shit that it can no longer fly.”

Now you know. And the (tom-tom) beat goes on…

The Order of the Walking Eagle was last modified: October 2nd, 2019 by Woody Zimmerman