The Perils of Documenting Your Vote in Virginia

March 6, 2012 I took my (then) three year old to the polls to vote in the Republican presidential primary.Â  My customary polling place in western Fairfax was quiet that day and I wanted to capture the memory of showing my son what it means to vote.Â  I took a series of photographs with my phone to upload to the popular social networking site.Â  I had second thoughts afterword and looked into the law.Â  It turns out that Virginia election officials considered my taking of the photographs as a misdemeanor.

When you go into the voting booth on Tuesday (setting aside absentee voters) you should know there are substantial restrictions on you documenting your own vote. [read_more]

Historically, taking copies of official ballots, or a picture of a marked ballot could beÂ utilized Â to thwart otherwise valid elections.Â  Supposedly a copy of a marked ballot can be used to pressure or trick others into voting for a particular candidate. Â They can also be used to prove a vote as part of a vote buying scheme.Â  Exact replicas of official ballots could be potentially used to stuff a ballot box.

Virginia law prohibits taking a copy of an official ballot away from the voting booth.Â  Does a picture containing some or all of a marked or unmarked ballot constitute a â€œcopy.â€Â  Perhaps someday soon we will find out with some unlucky guinea pig.

Can you at least take pictures in the polling place? 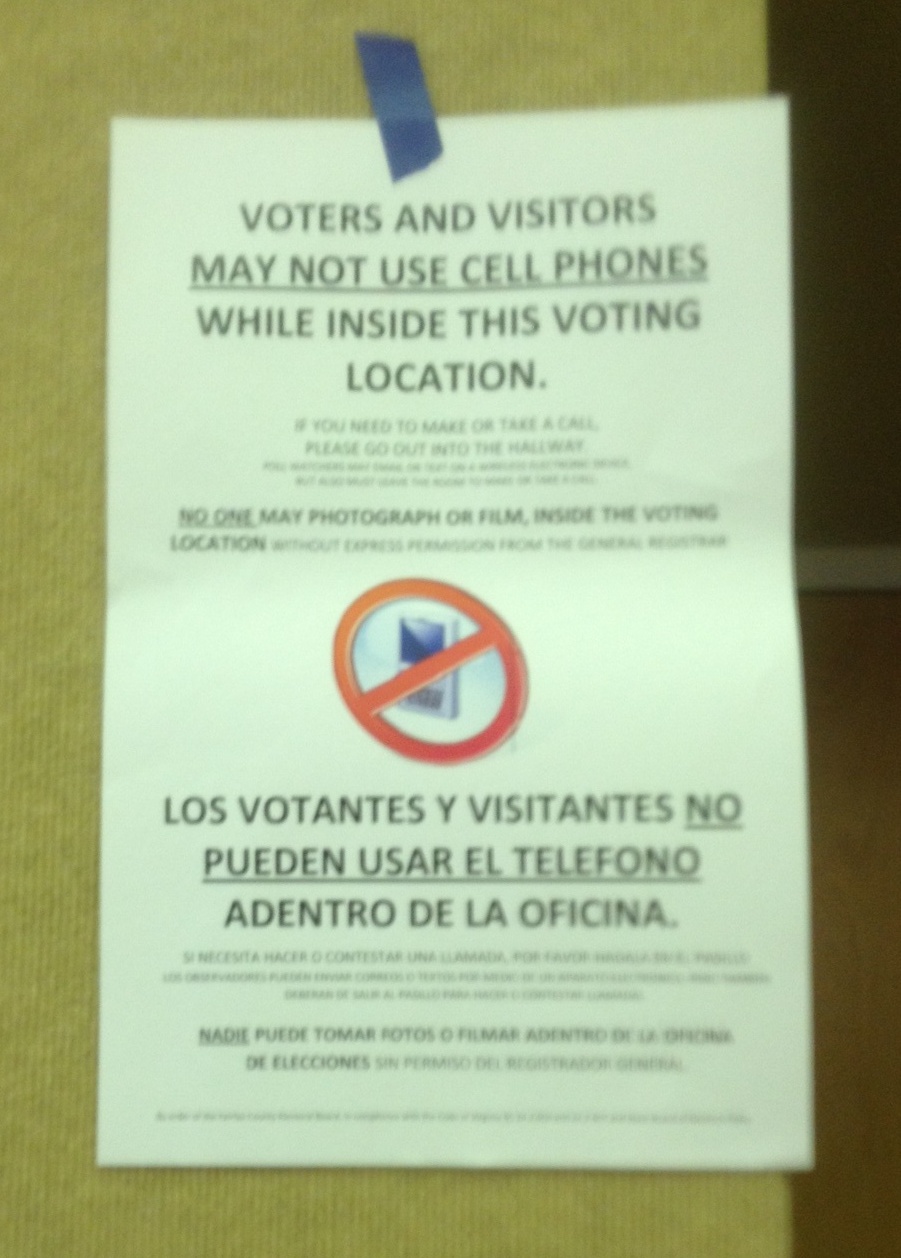 Virginia law technically does not prohibit taking pictures of yourself or inanimate objects in a polling place.Â  There is no guarantee your jurisdiction will follow the law.

Candidate and party representatives are explicitly prohibited from taking photographs or videos in a polling place.Â  Va. Code Â§ 24.2-604(C).

Members of the media are allowed to film and photograph with permission under specific parameters.Â  Va. Code Â§ 24.2-604(J).

No one is allowed to take pictures that â€œhinder, intimidate, or interfere with any qualified voter so as to prevent the voter from casting a secret ballot.â€Â  Va. Code Â§ 24.2-607.

But all photography was prohibited at my last polling place…

At the general election in 2012 I kept an eye out for any clear instructions regarding photography and found the sign at the right:

Regulations like this arise from some vague language such as prohibitions on hindering a qualified voter or disrupting the official duties of an election officer.

These general prohibitions are bolstered by a nonbinding guidance document issued by the state board of elections which states (without authority).

What is there left to do?

Given the potential criminal prohibition on copying ballots, documenting your vote is unwise.Â  You will also likely face substantial opposition to taking pictures or video within the polling place due to a lack of clarity under Virginia law.Â  The Digital Media Law Project provides some advice as to how to conduct yourself in the polling place if you desire to take video or pictures.

This is an issue that does not easily fit into the traditional left or right divide.Â  Documenting your vote is encouraged by both left wing and right wing folks. Â In Virginia, weÂ need a legislative change, not a test case.

Feel free to send me pictures from within or around your Virginia polling place indicating signage of rights or prohibitions regarding photography, and other interesting behavior regarding photography.Â  These can be sent to me at [email protected] (remove the NOSPAM, do not send me pictures that could constitute your alleged criminal behavior, sending me an email with or without pictures does not create an attorney-client relationship, and the communications will not be considered client confidential information; I will use pictures with permission only.)

The Perils of Documenting Your Vote in Virginia was last modified: October 30th, 2014 by Paul A. Prados

Be careful, Super Tuesday votersâ€”it may be illegal to Instagram your ballot | Fusion March 1, 2016 at 2:30 pm

[…] attempt to solicit or attempt to influence any person in casting his vote.” And there’s some evidence that polling places in Virginia have banned photography […]

Reply
Documenting your vote: more important in light of problems in Virginia Beach | The Bull Elephant November 4, 2014 at 4:25 pm

[…] As I indicated last week, taking pictures of your official ballot is likely regarded as a misdemeanor in most jurisdictions in Virginia. […]

True the Vote has an answer. Help combat voter fraud tomorrow! Be prepared if you see something wrong at your polling place. Download ‘True the Vote’ recommended VoteStand apps for SmartPhones. For Android -https://play.google.com/store/apps/details?id=com.mobotory.VoteStand & for iPhone – https://itunes.apple.com/us/app/votestand/id572145367?ls=1&mt=8. PLEASE SHARE!

Counselor, you’re starting a fire and throwing gasoline on it. I’m sure that if you get charged with that Class 1 misdemeanor (and you won’t), even your hated ACLU will come to your defense on this.

Even that damn cat that yall had on here had better legal arguments that you do.

Bruce,
Your commentary is often more astute than this.

“you’re starting a fire and throwing gasoline on it.” No, I’m pointing out that Virginia has a vague law with unknown/inconsistent enforcement that has criminal penalties. The law specifically prevents monitoring of polling place behavior. Most people do not realize this, and I am informing them.

“I’m sure that if you get charged with that Class 1 misdemeanor (and you won’t),” I agree I won’t get charged for two reasons, 1. If an election officer did not witness the behavior, enforcement is extremely remote, and 2. The statute of limitations has long since passed.

“even your hated ACLU will come to your defense on this.” Maybe, and “hated” might be too strong a word.

“Even that damn cat that yall had on here had better legal arguments that you do.” Feel free to hire alternate counsel, I recommend against hiring household pets.

Does this mean if the electronic voting machine “calibration error” flips your Republican choice to Democrat, you’re not allowed to film it? How convenient for the fraudsters to not allow visual proof. People walk into and out of polling places with their party’s sample ballot — that is a copy of a ballot.

Yes, it’s a copy of a sample ballot, not a real one that you write on and are supposed to turn in.

As a photographer only by hobby, I happened upon this glaring example over at Flickr.

The first thought that occured was how could any legitimate officers of election have let this slide by. This is up there but not worse the texting while driving.

Enforcement depends heavily on your election officers. Starting at the general election in 2012 mine have been extraordinarily strict. Order in the polling place is rigorously enforced against the voters. Campaign representatives though wander around talking constantly on their phones, flagrantly talk about candidates and wear excessive political paraphernalia, and consistently interrupt the election officers to find out the status of voting.

As for the easily found “misdemeanor,” there have to be tons of these.

Texting while driving is a worse offense but is treated as an insignificant offense in comparison.